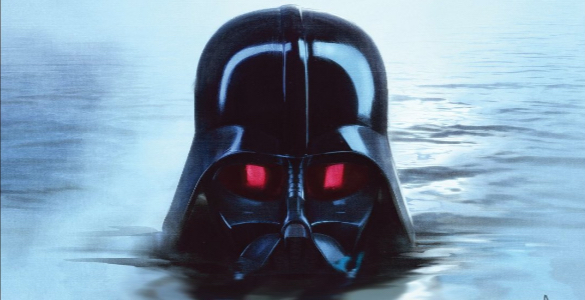 Given how pervasive politics are in our current landscape, it’s no surprise that so much of the media being created nowadays contains political allusions and allegories. Both the allusions and especially the politics themselves can be exhausting at times, but given how dangerous so many political groups are today, getting involved and taking a stand seems absolutely necessary, no matter what the cost. That’s certainly the theme that runs throughout Charles Soule and Giuseppe Camuncoli’s Darth Vader 14, a clear allegory for our fraught modern political times that argues that great sacrifices must be made to fight oppression wherever it rears its face.

In the case of Mon Calamari, that means flooding and destroying all their surface cities and installations in order to impede the Empire’s progress. It’s a sacrifice their king is willing to make to fight off the oppressive Empire, and a move suggested by his hidden Jedi ally, Master Barr. Barr’s seen a vision of his plan’s success, but Soule makes it clear that this drastic matter is pretty much Mon Calamari’s only option to fight back at all. 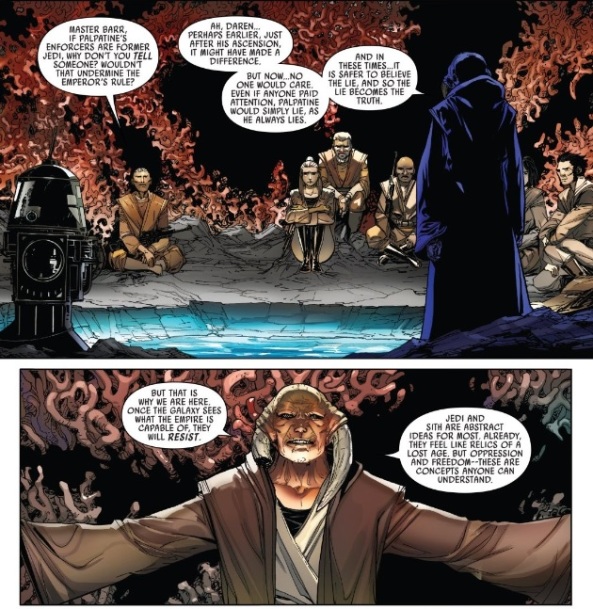 This is the page in this issue that can’t help but to bring to mind current politics. Palapatine is a pretty clear stand-in for Trump, the demagogue whose every lie will be believed as gospel, for whom the truth seems to slide off like Teflon. Barr knows that the only two sides that mean anything anymore are oppression and freedom, and in an age where the power and backing of both major political parties seem weaker and more corrupt by the day, this certainly feels true. The only things people can rally behind anymore is either trying to free others or trying to hurt them, and both sides often mean taking drastic measures.

The thing about this sequence is that Barr is right — the sacrifice Mon Calamari makes will eventually lead to the Empire’s defeat, but it will take decades, and in the meantime many many more will suffer and lose their lives (including, I’m assuming, Barr himself). I don’t think that’s the exact outcome Barr had in mind, but I don’t think he would have weakened his attack even if he’d known the truth. I’m sure that so many of us sick of the current oppressive regime hope that every new development will be the one to topple things, but it’s probably important to keep in mind that we may be dealing with fallout from Trump for far longer than we’d ever expected, and that this doesn’t make it any less important to keep fighting and resisting anyway.