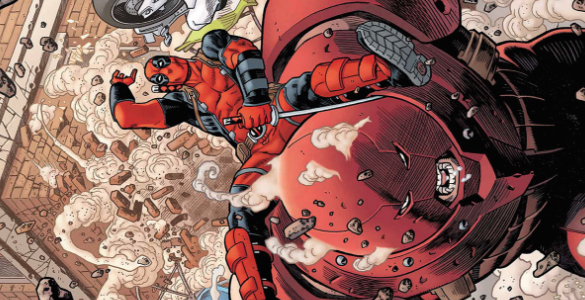 Here’s something that’s true about comics: it’s a medium full of speaking characters that we will never actually hear speaking. By Izzard’s math, that means there’s a full fifth of a character’s essence we’re never really going to get through images and words on the page. As Deadpool pulls out all the stops to finally achieve suicide-by-mercenary, so too does the creative team pull out all the stops to express the height of his desperation. All the usual gears are spinning perfectly: Gerry Duggan’s writing is as simultaneously tight and chaotic as ever, and Mike Hawthorne’s impeccable layouts convey an almost grueling understanding of the setting of this issue-long brawl. But I want to focus on that elusive final 20% — “how you sound” — with Joe Sabino’s excellent lettering in this issue.

“Lettering? Patrick, there’s a human-woodchipper that empties into a tank of piranhas.” I know, I know, and I love that stuff too. That’s a Rube Goldberg machine of bodily destruction that’s equal parts gruesome and silly, perfectly embodying what a Despicable Deadpool comic is. Perhaps even more befitting Deadpool, the first half of that idea is lifted from Fargo. Even the gross-out gags that seem too bonkers to be from any other series are references. Where Despicable Deadpool is uniquely itself, and consequently where Wade is uniquely himself, is in how desperately the character wants to die.

The first four pages are Deadpool fighting Juggernaut. That’s a big gun in the Marvel Universe: an unstoppable battering ram of a man. But Wade takes him out through a predictable mix of self-harm and tactical use of a cement truck. For Deadpool, that’s more or less business as usual. The desperation comes in when he hucks a dude in a wheelchair at Taskmaster. 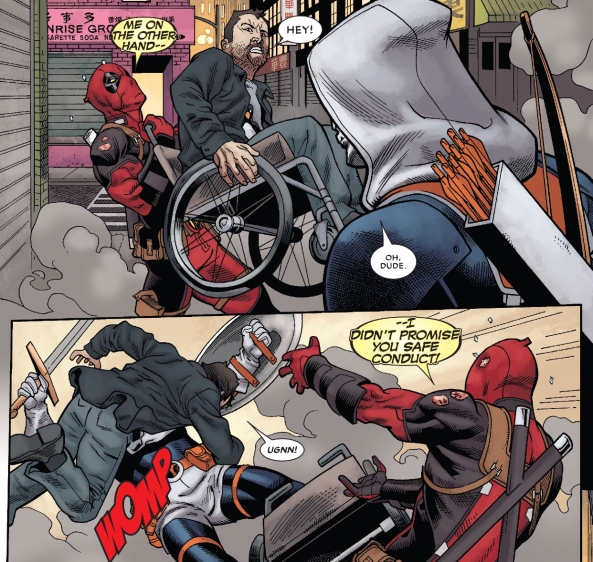 Check out the lettering in Deadpool’s speech balloons here. Sabino is using a font about 50% bigger than the rest of the dialog in the issue, without really increasing the size of the balloons themselves. Deadpool’s words violate the edges of the balloon, forcing both the black outline and the sickly yellow colors of Wade’s balloons to bulge out where ever the words don’t fit. What does that sound like? That’s going to be up to every individual reader’s imagination, but we all universally have to read it differently. Duggan, Hawthorne and Sabino tie this style of lettering to a truly low point for the Merc with the Mouth. It’s Deadpool literally using a person as a weapon in a last-ditch attempt to get what he wants.

So when Sabino uses this technique again to letter Deadpool berating Taskmaster and Bullseye for not killing him, you know he’s lost his goddamn mind. 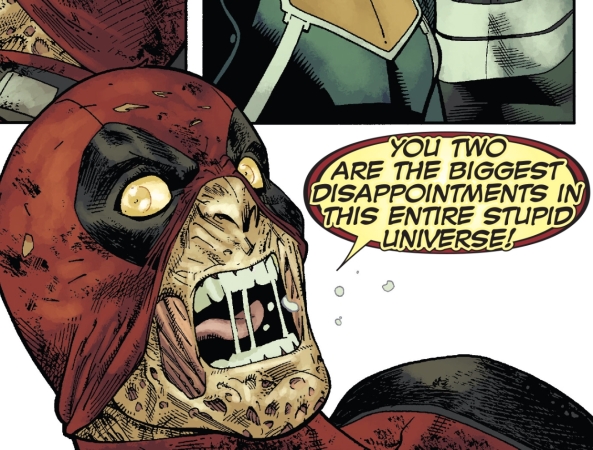 He’s screaming, and it’s selfish and sad, just like when he threw a guy at Taskmaster. It’s emotion you can almost hear, rounding out that last 20%.