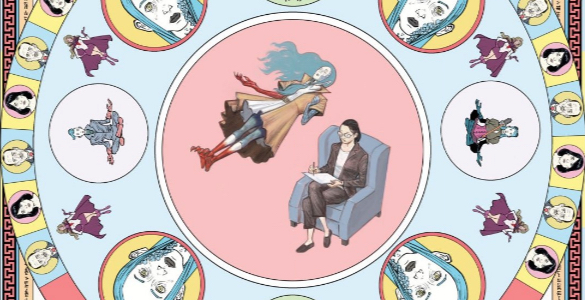 Caroline Sharp isn’t quite all there. I don’t mean that to be a dig at her mental health — she’s literally never just in one place at one time, but rather, being pulled in several directions at once, her consciousness torn between past and present, fantasy and reality, the planet Earth and the far reaches of space. I don’t think it’s the more far-out aspects of this situation that bothers Caroline — it’s the fact that she can’t control it.

Discussing last month’s Eternity Girl 1, I mentioned how Caroline seemed to come alive once she had a plan, even if it was a suicidal/genocidal one, because it gave her a purpose and some control and direction in her life. Magdalene Visaggio and Sonny Liew seem to confirm my theory in issue 2, which homes in on Caroline’s feelings of aimlessness and uselessness. This first pops up at the comedy show Dani takes her to, where a fleeting movement in the corner of Caroline’s eye seems to split her perception of reality, forcibly splitting her consciousness between the show and a trip to the most outer fringes of reality with Madame Atom.

Again, what seems to bother Caroline most about this is the fact that she’s being dragged along on some journey that’s out of her control.

The comedian Caroline and Dani see speaks of taking control of her narrative through stand-up comedy, and that’s something Caroline just can’t relate to. She describes herself as being “shut out of her life” — not in control of her life, with no real agency over where she goes or what she does, no control over her jobs or powers, or even her own life and death or her own perceptions of reality.

Again, it’s no wonder that Caroline thus embraces an opportunity to bring about the end of all creation just to feel in control of something again. On a smaller scale, this plays out when Caroline destroys Sloan’s home (and quite likely kills him and his family). She’s acting out on destructive fantasies she’s been nurturing the entire issue, doing something destructive just to gain some modicum of calm and control. It paints Caroline as a villain, but one whose desires are understandable and sympathetic nonetheless — I want her to find a better way to take control of her life than the offer Madame Atom offers her, not just to save the universe, but so that she can find some peace that doesn’t involve her own death as well.