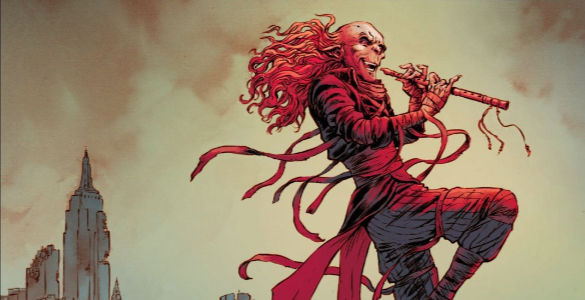 Drew: Homicidal mutants. Power-hungry ninja clan leaders. Aliens bent on world domination. The Teenage Mutant Ninja Turtles franchise has had a ton of villains over the years, but they all tend to share one thing in common: obvious evilness. IDW’s incarnation has done a great deal to complicate and question the morals and perspectives of those familiar villains, but never so much to make the Turtles frame the choices of their adversaries as “misguided.” Which is precisely why Splinter’s slow heel turn has added so much depth to the series. It’s fine for the Turtles to be battling an evil, cackling warmonger when they’re appearing on a Saturday morning cartoon, but in this age where people seem to believe there are “very good people on both sides” of every argument, we may need more nuanced depictions of evil. The road to Hell, they say, is paved with good intentions, which is all anyone seems to have in this series at the moment. You know, besides the Rat King.

Actually, that anyone is even aware of the Rat King’s presence is a great place to start, as the opening scene frames both Splinter and Leo having the same vision in parallel. Or, to pick up at the very start of the issue, Splinter and Leo prepare themselves for their visions with identical rituals.

The parallels here are lovely, but I’m almost more enamored with the ways artist Dave Wachter highlights the differences. While Splinter has fresh candles on identical little stands, Leo is reusing candles, and putting them in absolutely any vessel he can find. These differences don’t impact the vision that follows, but they do a great deal to remind us of the differences between these characters at this moment. Splinter has the space and resources to dedicate to his practice, where the Turtles are repurposing literal garbage to get the job done.

Writer Tom Waltz emphasizes the differences further after the vision, as Leo’s own prior experience with the Rat King gives him a decidedly stronger reaction to the thought of his return.

Wachter is able to maintain that parallel construction, but the dialogue works more as a kind of conversation. Splinter asks questions, and Leo answers them. But of course, each half of this conversation is missing the other, so while Leo is scrambling to do anything, Splinter is mostly left bewildered. These sides are different, but they come from very much the same place.

If that “two sides of the same coin” subtext is too subtle for you, Waltz lays it out much more explicitly a few pages later, as the Turtles once again discuss their father’s actions.

“Good intention. Bad execution.” It’s a simple point we all understand in theory, but is essential to extending some good faith in this political climate. Are our antagonists truly evil, or just misguided?

Or, in the case of Hun, there may be some force outside of the conflict that is driving the antagonism. Now sober and steady, Hun is looking to turn over a new leaf with Casey, acknowledging and accepting Casey’s leadership over the Purple Dragons. It’s a surprisingly mature turn for someone who had heretofore been a bit of a hothead of a character, but it makes perfect sense in the spirit of this issue. Casey will have to extend him some good faith to accept his assurances, but that may well be the healthy thing to do in this situation.

Which brings me back to the Rat King. While everyone else here might be understood as having “good intentions” (execution be damned), there is little doubt that the Rat King just means to wreak havoc on humanity. Splinter and Leo’s visions depict him marching the citizens of New York off a bridge, though it’s unclear if this is his literal plan, or more of a metaphorical gist. His speech about severing bridges certainly makes it possible he intends to actually send people plummeting to their deaths, but I suspect we have a long way to go before we get to that point, anyway, so it may be a moot point.

Taylor! There’s a lot going on in this issue, and while I definitely think there’s a lot tying it together, I kind of glossed over anything involving Agent Bishop or Baxter Stockman. Those may mostly just be there to keep those stories simmering on the back burner for now, but I’m curious if they resonated at all for you. Or maybe you were too distracted by the character design on this frog with a mustache? 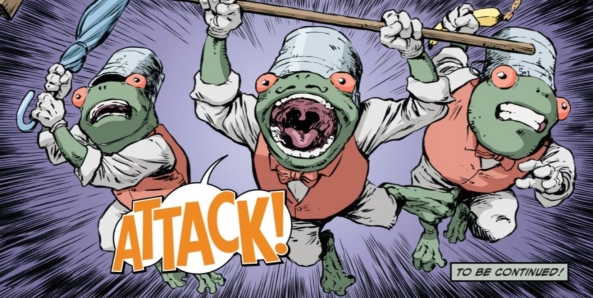 A. FROG. WITH. A. MUSTACHE. I mean, the vest/bowtie combination, the bucket hats, and the banana-nunchucks (banunchucks?) are all irrefutably great, too, but come on.

Taylor: Oh man, those frogs are great, and being a fan of all things Toad Baron related, I’m happy to see them make an appearance in this issue! I can honestly say I was initially surprised to see the Baron and his lackeys show up in this issue, but after thinking about it, I really shouldn’t be. The reason for this is that the writers for TMNT long ago proved themselves masters at interweaving side issues and plots into their grand narrative. That the Toad Baron is getting mixed up in the coming battle over New York shouldn’t surprise me so much as inspire a knowing smile and head nod.

This is where I think some of the threads holding this issue together are visible, as you mentioned, Drew. A great example of this is Casey and Hun’s story being included in this issue. At first glance, it’s a little curious to see it placed within these pages and taking up about a fourth of the issue. After all, it doesn’t have anything to do with the Rat King, Splinter, or Agent Bishop. Or does it?

As Hun and Casey walk home at night they are ambushed by a rival gang from New Jersey. They probably would have gotten their assess kicked (or killed) if it had not been for Jennika and the Foot Clan dropping in at the last minute to save their tails.

Casey doesn’t really know who she is or why she’s fighting for him and he doesn’t get much in the way of an answer to this. However, before she leaves Jennika does name drop Splinter so Casey is aware of who’s responsible for saving his life. While this could just be a random act of kindness on Splinter’s part, it seems more likely that this is a calculated move. In moving to solidify his grasp on New York, it would benefit Splinter to have the Purple Dragon gang on his side. Saving both Hun and Casey certainly would go a long way to having them join his side.

But what does this have to do with Bishop and the Rat King? Well it might not have much to do with the Rat King, but it sure as hell relates to Bishop. Elsewhere in the issue, Splinter and Bishop discuss the continued prescience of  government special forces in New York even though the Triceratons have disappeared.

It seems likely that it is only a matter of time before Splinter and Bishop’s alliance falls apart and the two sides declare war on each other. In any war, it’s good to have as many allies on your side as possible. Splinter, a masterful tactician, knows this. Keeping this in mind, it suddenly becomes clear why he ordered Jennika to protect Casey. He wants allies to help him take down Bishop. In this way, two distinct story lines from this issue are tied together, even if how they are knotted isn’t all that clear at first.

This all ties back to the wonderful job Kevin Eastman, Bobby Curnow, and Tom Waltz have done in writing this series. No plot line is left dangling and no character is superfluous. It seems almost inevitable that at some point a plot point or person will dramatically affect the main story line in a meaningful way. That’s hard to do 80 issues deep into a series, even if you don’t include spin-offs. In short, what the writers have done with interweaving plots is nothing short of amazing.

Which brings me back to the Toad Baron. His first appearance is in TMNT Universe 9, an issue which ostensibly serves as a fun little side quest for our heroes. However, no spin-off issue of TMNT is just for shits. We later learn that the Toad Baron is one of the immortal god-like beings who toy with humanity every now and then. This being so, it’s not surprising he should show up in an issue with Rat King.

Speaking of, can I just say that the Rat-King’s whole Pied Piper vibe is a little too on the nose? Not only is he seen leading people to a watery death in Splinter and Leo’s vision, but he even enslaves kids with his flute.

I’m always weary when stories borrow too much from myth and legend — a passing reference will do instead in my mind. If it turns out that the legends of the Pied Piper sprung up from something the Rat King did years ago, that just seems cheap. Still, TMNT has borrowed from legend and folklore before and generally been OK, so I’ll guess I’ll just have to wait this one out and place my faith in the writers. From what I’ve seen of their abilities up to this point, though, that doesn’t seem like a bad choice at all.