Mark: The best teams are made up of strong, diverse personalities that bring out the best in each other. This is especially true in fiction. The individual members don’t need to always get along, conflict drives any story, but a certain baseline level of respect is necessary. One of the most impressive feats of team building in recent history has to be 2012’s The Avengers. Looking back with full knowledge of the incredible success Marvel Films has achieved almost unblemished since Iron Man ten years ago, it’s easy to take for granted the fact that The Avengers worked at all, but at the time it was incredibly risky. Going back and watching The Avengers now, the first two-thirds of the movie drag quite a bit as writer and director Joss Whedon works to establish the team dynamics, but that groundwork was necessary not just for the first movie, but for the Marvel Films team-ups to come. Again, we take for granted now that all of these characters can seamlessly interact with each other, but that’s only because the hard work was done by that essential first Avengers film. In Exiles 1, Saladin Ahmed, Javier Rodriguez, and Alvaro Lopez begin the work of building their own superhero team, and, like The Avengers, their patience in this premier issue sets them up for long term success.

X-Man Blink (aka Clarice Ferguson) is enjoying lunch with her aunt in the Bahamas when a strange talisman on the moon draws her attention. Retrieving the Tallus, she encounters The Unseen (oh right, Original Sin was a thing) who informs her that the Time-Eater is destroying the multiverse and wiping entire worlds out of existence. Unfortunately for Blink, the Tallus has goals of its own, jumping her from world to world, moments before they are consumed, in order to grab others members of a rapidly growing ragtag team. 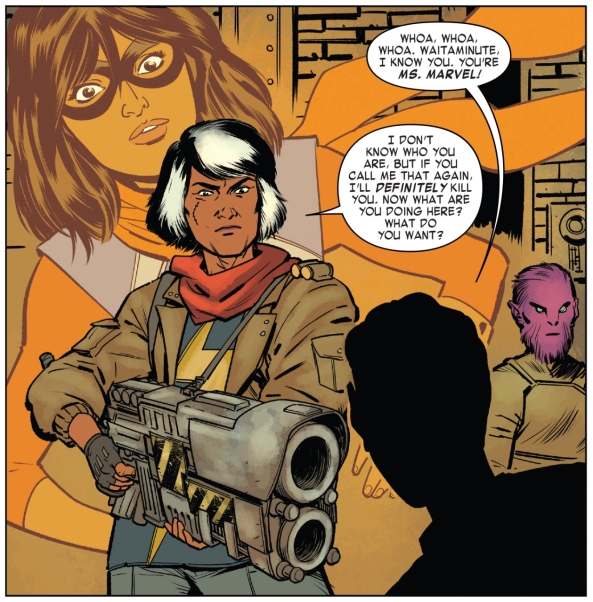 In addition to Blink, we’re introduced to two team members in this Exiles 1: Khan, an aged Ms. Marvel living in a post-apocalyptic hellscape, and young Nate Richards as Iron Lad. The issue’s cover makes it clear that another two members are on the way (including a cartoon baby version of Wolverine, Wolvie, and Valkyrie, the breakout character of Thor: Ragnarok), but Ahmed doesn’t rush to bring everyone together in issue one. This does lead to a story that is a bit frontloaded with exposition (two Nick Furys!), but, like The Avengers before, taking the time to lay everything out for readers now sets this book up for success in the future.

Luckily, even though there’s a lot of information to get out, the issue never feels like we’re being forced to eat our vegetables, and part of that success is the energetic art from Rodriguez and Lopez, with Jordie Bellaire killing it on colors. There’s a bit of a throwback sensibility to Rodriguez’s style this issue; it doesn’t draw attention to itself, but the retro-styling matches the energy of Ahmed’s snappy writing, and is a smart choice to draw together the disparate timelines. I’m especially fond of this moment towards the end of the issue where Kang the Conqueror (the grown up version of Iron Lad — time travel!) tries to blast away at our heroes with this neat bit of onomatopoeia wordwork: 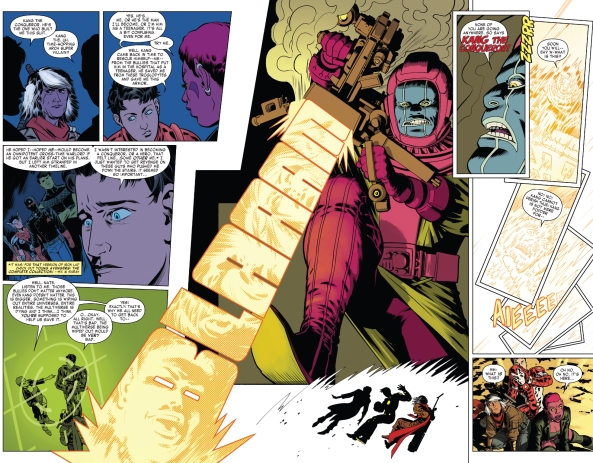 What’d you think, Ryan? My understanding is that this book is a pseudo-reboot of a title from the early aughts which I haven’t read. Are you familiar with the older title at all?

Ryan D: I think that I forgot that I actually did read a bunch of the old Exiles back in the day, Mark, but it was easy to pick up a title which featured, for a time, both Blink and Deadpool. Blink as a character always resonated with me ever since I saw her complicated relationship with Sabretooth back in “Age of Apocalypse”, but the real thing I remember from the old Exiles issues is Morph and his sense of humor. If you didn’t see him on that team, Morph was written as a zany cartoon of a character who would transform and crack jokes at a drop of a hat while also functioning as a great device for some cheeky exposition. While he has yet to make his official debut, I feel like the soon-to-be-featured little Wolvie will fill in that role in this current Exiles team, and for that, I am glad.

After his outstanding work on Black Bolt, I have been champing at the bit to read more from the mind of Saladin Ahmed, but boy, this is quite a departure from Ahmed’s first comic series. I think that’s a good thing. Exiles books always seem to have their tongues planted firmly in their cheek, and I enjoy watching Ahmed have fun with an essentially absurd venture. The tone here fits very well, and as you mentioned, Mark, there’s a lot of loving throwback in this issue. Though I happily skipped Original Sin, I enjoy the verbose, Stan Lee-esque text that serves at The Unseen’s dialogue. It perfectly recaptures that hammy feeling that I get whenever I read a Silver Age title featuring The Watcher or some other cosmic character who lives above it all. Blink, herself, speaks in that style of glib dialogue popular back in the day whenever a writer tried to portray a young, brash hero like Jubilee or Shadowcat. It might come across as cheesy at first until one realizes that it’s all part of the show.

But this first issue runs really smoothly despite its corny spirit; I think it’s easy to see the craftsmanship in these pages. Though I know it’s an easy piece of visual vocabulary to use, I enjoyed how Rodriguez and Lopez signify time being distorted or universes being jumped through: 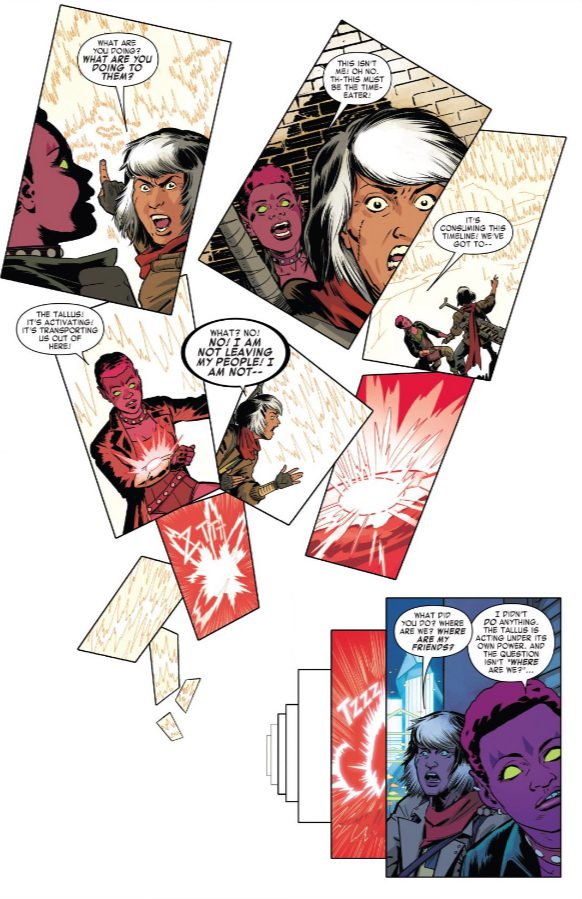 It can be difficult to pull off a piece of “movie magic” like time travel in a static medium like comics, but even the use of stacking panels like they were playing cards works to sell the idea that time is not passing in the linear, sequential order which lets our human brains interpret these disparate images as chronologically contiguous. It’s a nice trick, and after Rodriguez and Lopez establish that technique as part of the vocabulary of the issue, it’s used again a few times — each time slightly differently and to a different effect — until the big reveal at the end of the issue.

The Time-Eater, looking like a desiccated Galactus head, arrives at the end of the issue — after its presence is hinted at for the entire book in the grand tradition popularize in pulp comics or even horror films like Jaws. When we finally see the Big Bad, it’s a cool payoff:

Along with presenting the scale of this monster, this image also lets the audience know that something familiar like the terrible visage of Galactus has been corrupted into something even stranger. It also took me until my second read-through to notice that the edges of the pages show mess of panel gutters strewn haphazardly, as if to assert that this new villain operates under different rules than our formative hero team, and also disregards the conventions comics readers have learned to understand. I hope that the creative team keeps running with this idea; with the talent of these creators backing this title, they could really have fun with this bad guy. Exiles 1 reads as imaginative and silly — yet still takes the craft in it seriously. I’m excited to get my fix of Blink and also see this hard work put into the first issue pay off.