Life is literally defined by two things: birth and death. Sure, there’s a bunch of stuff that comes between those two milestones, but if you’re looking for something that all living things have in common, birth and death are pretty much it. Unsurprisingly, these two events have taken on a symbolic meaning for us humans. Ideas such as Yin and Yang, Light Side and Dark Side, Good and Evil, all stem from the dichotomy between the giving and extinguishing of life. It’s unsurprising, then, to see these two pillars of life make an appearance in Infinity Countdown 2. The grand scale of narrative presented is ripe for such grand themes as birth and death.

The Guardians of the Galaxy, the Nova Corps, the Raptors, and the Chitauri are all fighting for the Power Stone. The fight for the stone is a clusterfuck, and in the middle of it all, Eve Bakian gives birth to her child, a baby girl. At this point in the issue, the narrative transitions from this fight to Adam Warlock awakening on Earth, where Adam ruminates about how “death comes for us all.” Cheery stuff, for sure, but it’s slightly ironic that he says these things after practically waking from the dead. Still, death does permeate Adam’s side of the story, as his visit with Ultron well illustrates. 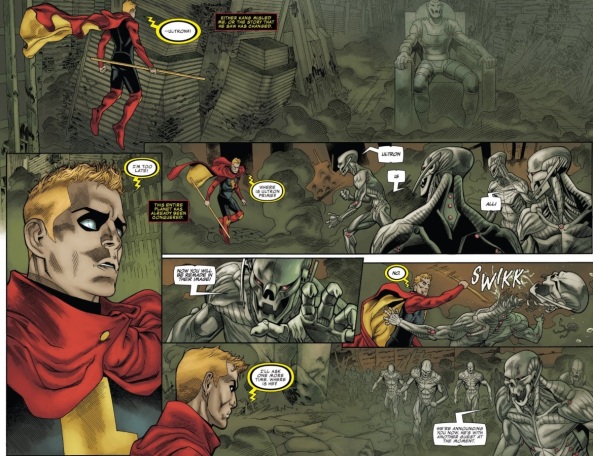 Adam’s part of this issue is tonally distinct from the chaos that comes before it, and I don’t think it’s a mistake that his death-centric narrative is introduced just as Eve gives birth. Given the link between birth and death, it makes for a natural transition device in this issue.

Getting back to Adam’s story, however, colorist Jordie Bellaire does a marvelous job handling the tonal shift — from birth to death — in this issue. Where the scenes with Eve and the guardians are full of neon reflecting the new life being born in the heat of battle, Adam’s are dark and grey reflecting his morbid preoccupations. This is especially true when Adam visits Ultron’s world only to find it dead, grey, and lifeless, save for killer robots. Not to be overlooked, Adam’s costume is still highlighted by bright reds and yellow. This makes sense. Even though he loves talking about death, Adam is trying to save life. In this sense, his bright colors, in the midst of dark grays, signals the tension and fight between life and death — a fight which this issue is all about.

13 comments on “Life and Death (and Colors!) in Infinity Countdown 2”