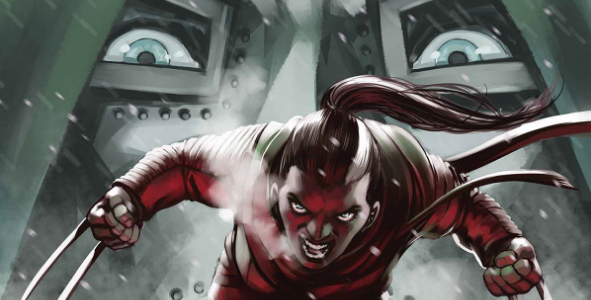 I love the concept behind this “Old Woman Laura” arc. Diving into a Wolverine’s future to find a utopia is a refreshing change of pace, and a beautiful way to show how Laura’s more civil and humane approach to heroing — her attempts to be better than Logan — eventually pays off. That Laura’s final regret — and final mission — would be Bellona brings All-New Wolverine full circle in a satisfying way. Issue 34 itself has so many delightful moments; I practically squealed when Kate Bishop showed up. Yet, for everything that I love about this storyline and this issue, it also has a few major problems. A story of this scope needs more time and room to play out than it’s getting.

Notably, there’s a lot of talking about the world being a utopia, but very little seeing it. This is more understandable in issue 34, which is set almost entirely under Doctor Doom’s dome, than it was last month, but it still means missing out on what actually makes Laura’s future special in exchange for focusing on threats that don’t feel too afar from what Laura might face in the present.

Issue 34 works well as a self-contained chapter showing how Laura’s team infiltrates Latveria, but as Part 2 of a three part story, it still feels like the story has barely begun. It’s a story about saving/redeeming Bellona where Bellona has yet to even appear, and a story about taking down Doctor Doom, the last supervillain in the world, where he’s yet to appear beyond a single-panel, non-speaking appearance. We’re entering the final act of this story but have barely touched on what is ostensibly its main thrust, and I fear that will make for a rushed ending.

I hate to complain about this issue because, again, so much of what Tom Taylor and Ramon Rosanas actually give us in it is delightful. The guest appearances are fun and unexpected, and Maria Hill’s death is not only surprisingly poignant, but fit the themes of this series and storyline well.

Laura’s vision of a perfect world, where the heroes win, is enough to melt even Maria Hill’s cold heart and give her hope for a better world. It’s a powerful testament to the work Laura’s done, but again, I wish we got to actually see more of what Laura’s done to inspire so many. Likewise, Hill is a bit of a strange choice to focus so much of this arc on — I believe she and Laura have interacted and perhaps even clashed before, but this issue implies a much more significant relationship and story between them than they ever really had. As much as I’d hate to lose this moment, or even the cameos, they ultimately feel like a distraction from the real meat of this story.

That’s ultimately the problem with this arc: it wants to have its cake and eat it too. It’d be a stronger story if it went bigger, taking the time to really explore this new world Taylor created, or if it went smaller and just honed in on Laura, Gabby, Bellona, and Doom. Instead, though, the pace is stuck firmly in the middle, and it’s doing “Old Woman Laura” no favors.