Spencer: Big comic book events and crossovers aren’t exactly known for intimate, character-based storytelling — instead we read these stories to see dozens (sometimes hundreds) of characters all hanging out and mixing together in ways they never would at any other time. Damnation has been an interesting event because it’s the exact opposite — Donny Cates, Nick Spencer, and Rod Reis’ story works best when the scope remains small, and becomes weaker and weaker the more it tries to be an “event.”

Doctor Strange: Damnation 4 is the series’ finale, which finds Doctor Strange defeating Mephisto thanks to a little help from his friends. Wong is the real hero of this story: he institutes Johnny Blaze as the new king of Hell, sapping Mephisto of much of his power and influence, then the two help Strange to channel the souls of the lost Avengers (Black Panther, Hawkeye, Captain Marvel, Thor, Falcon) so that he can decimate Mephisto one-on-one, to the point where Mephisto outright surrenders to Strange.

This works so well thematically. At its most basic level, Damnation has been a story about Strange trying to rack up a “win” to make up for how terrible his life’s been since previous writer Jason Aaron’s run began, and to help make up for the fact that he feels like he’s alienated every friend he’s ever made. His victory isn’t just a win, but a win that comes because he’s supported by his friends, to the point where they’re lending him their very souls as he channels their power, combining their strength into one. Metaphors don’t get much more explicit than that.

The most important — and most estranged — friendship in Strange’s life, though, is Wong’s. Thus, the most cathartic moment in Damnation 4 isn’t Mephisto defeat, but Strange and Wong’s reconciliation. 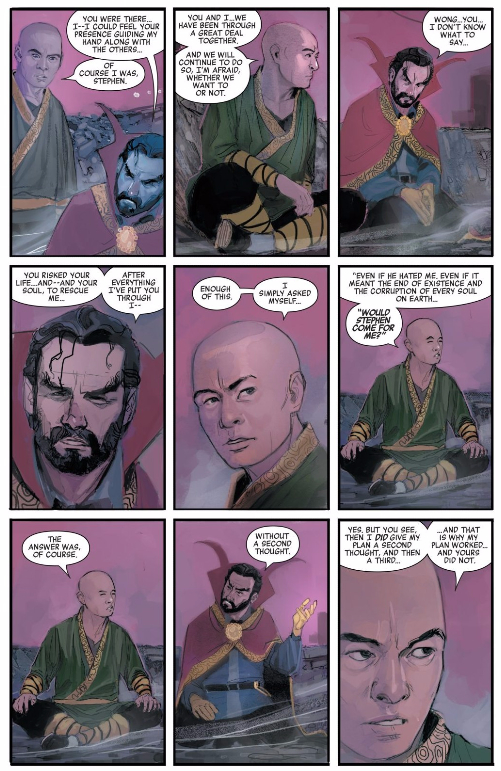 This is the moment all of Damnation has been building to, the moment when these two long-time friends can simply be on the same page again — both literally and metaphorically — and hash things out. Cates, Spencer, and Reis find real chemistry between Strange and Wong, creating a sequence that feels personal and lived-in, and characters who feel comfortable together even when they’ve been apart and at odds for quite a while now. There’s real weight to this reconciliation, and the fact that Strange’s actual defeat of Mephisto is not only a visual spectacle, but also building to and enabling this very moment, makes it a powerful conclusion to this series.

Unfortunately, the moments where Damnation tries to extend its scope don’t work quite as well. Johnny Blaze taking over Hell, for example, takes place in another series entirely. This moment isn’t as egregious — we don’t really need to see Johnny’s victory, especially since Wong/the creative team are waiting to reveal it at the most dramatic moment possible — but it does speak to a larger trend with Damnation: there’s a lot of details introduced in the series that comes across as extraneous, and only pay off in the tie-ins.

(Also, if you did read the Ghost Rider tie-in, then this big moment is totally spoiled. Actually, the reading order for this event is pretty confusing; Damnation 4 and Doctor Strange 389 were both released this week, and there’s really no order to read them in without spoiling at least one of the issues.)

With Johnny and Mephisto, there’s an entire history between them that’s only alluded to within Damnation itself — the conclusion of their confrontation loses some power unless you’re already familiar with their backstories. The biggest problem, though, is with the “Midnight Sons.”

The only Son who really mattered to the story was Johnny Blaze. Although Wong recruited the rest because they were the only ones capable of not falling to Mephisto, their specific personalities and abilities never mattered to the story. As Blade points out, they were never meant to be anything more than distractions. Maybe that’s fair, but it’s not very exciting, especially when the Szymon Kudranski-illustrated epilogue teases a book/event based around these characters.

Why should readers care, or be excited about such a thing? Damnation never digs into why these characters are interesting or, beyond a few lines of petty squabbling, what their personalities or interactions will be like. Damnation could have been a backdoor pilot for the Midnight Sons, it should make readers want to read a book about them, but instead it basically gives us nothing but a list of names who are going to appear in another book. It’s awfully soulless, and not effective at all.

(Scarlet Spider’s appearances in Damnation feel especially tacked on, as he does absolutely nothing within the pages proper. Most events have so much story that some details have to spill over into tie-ins. This approach has its own problems, but I much prefer it to the feeling Damnation gives me, that editorial or other creators decided that certain characters needed to appear in this book and Cates and Spencer had to try to find a place to shoehorn them in to justify the tie-ins.)

Altogether, this makes for a strange event, one that would be more effective and interesting if it was smaller, not larger. The core of this story is very, very strong, but the other details distract from that core — or, at the least, do nothing to enrich it.

Taylor, how did this conclusion work for you? Did you find more to enjoy about the Midnight Sons or some of the other details that felt tacked on to me? Is there anything else about Strange’s victory, his and Wong’s friendship, or Reis’ art you wanted to expand upon? Would you visit the Hotel Inferno, like so many Las Vegas tourists seem eager to do?

Taylor: The details, as you put it Spencer, did stand out to me not so much because I thought they were interesting, but because they just seem so boring. Johnny’s ascension to the throne of Hell is a huge plot point and one I think should have been covered in this event proper, not in some tie-in. That being the case though, I don’t feel compelled to read that story in the least. The same can be said about the tie-in explaining why Stephen’s legs are broken.

Do I really want to read an issue that centers on Stephen breaking his legs? This answer is a clear no, especially when at the conclusion of this issue Stephen’s legs are repaired with magic and he seems to walking around just fine. While I admit that the story of Johnny becoming the King of Hell is a bit more intriguing, it’s still not enough to make me drop this this issue and run out and buy any of these tie-ins. While the selling of tie-ins in issue is something that has become a staple of monthlies, the truth is it’s an outdated practice hearkening to a time before comic books had much coverage. Now, a reader can log onto to any number of sources to locate tie-in issues. This makes Kathleen’s cheer to “go get it” more bothersome than anything else. Let the issue and story itself sell tie-ins, not fourth-wall breaking captions!

These tie-ins don’t play a huge part in the issue itself, even if they should since ultimately it is Johnny’s takeover of Hell that allows Stephen to beat the shit out of Maphisto and win the day. Johnny makes this happen by somehow imbuing Stephen with the soles of the Avengers who were taken control of by Mephisto. The result is a Dr. Strange empowered by five avengers.

I have to admit, that’s a pretty neat way to beat the devil and Rod Reis does a great job of drawing just how cool this idea is. However, this Superpowered Strange just doesn’t feel right. One of Stephen’s qualities when it comes to being a superhero is that he’s always one step ahead of his enemy. In that way, he is a chess-master. Here, that power is bequeathed to Wong to show that Stephen really needs him if he wants to defeat the devil and emerge victorious. This is nice and all, but there’s something I find a little off about taking away a hero’s primary power and giving it to someone else so that he can learn a lesson. Had Wong helped out Stephen using his unique abilities, rather than borrowing those of this friend, he would of have better illustrated why Stephen needs him in his life.

Even though a lot of this issue is a bit of letdown because it doesn’t do “big” right, I do appreciate the small moments just as you did, Spencer. One of my favorites comes after Mephisto is defeated and the Avengers confusedly try to figure out what happened. Being unaware of how their souls helped Stephen defeat the devil, they assume they somehow are solely responsible for their victory.

The Dark Avengers, or whatever it is we’re going to call Wong’s motley crew, aren’t too pleased to see the A-listers taking credit for their hard work. After all, they had just been fighting for literally hours against an undead hoard. It’s a funny moment which has some meta-commentary that most comic book fans will appreciate, especially when a giant summer blockbuster is drawing attention to all the typical, mainstream heroes once again. This is just another example proving that this issue is at its best when it’s not trying to be a giant crossover hit, but rather focusing on the characters that make the engine go.