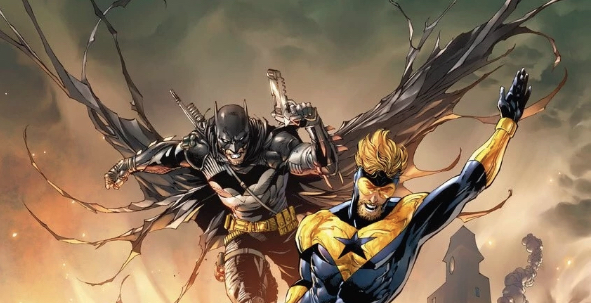 From now on, I am Evil Abed. We are the Evil Study group, and we have but one evil goal: return somehow to the Prime Timeline, the one that I stopped you from rolling that die. Then we destroy the good versions of ourselves and reclaim our proper lives.

The notion of the “darkest timeline” seems to have entered the zeitgeist, mostly through tongue-in-cheek suggestions that we’re currently living in it, but it’s a relatively common concept in science fiction. Indeed, there are so many examples, I kind of split my metaphor on my discussion of Batman 45, touching on everything from Back to the Future Part II to It’s a Wonderful Life to that “Treehouse of Horror” episode of The Simpsons where Homer keeps accidentally changing the timeline. But none are more explicit about the superlativeness of the badness of the timeline than Community‘s darkest timeline.

It stands as a kind of conceptual opposite of Gottfried Leibniz’s “best of all possible worlds” theory — his explanation for human suffering that any other “world” (effectively, a different timeline) would be worse. The Back to the Future franchise suggests that the original timeline was neither the best nor the worst (Marty improves it in the first movie, turning his father into a successful science fiction writer, Biff makes it worse in the second, turning himself into a Trump-ian real-estate mogul), but most of these other examples only show changes to the timeline making things worse — effectively, that we’re actually living in the best of all possible worlds. This is definitely supported in the horrific timeline Booster Gold created as Bruce’s wedding gift, which is undeniably worse than the DC Universe as we know it, though on the surface appeared better for Bruce. That is, until Booster tries to fix things in this issue.

I have to admit, it’s hard to get too invested in “darkest timeline” stories in serialized storytelling, since we know things will inevitably return to the original timeline, likely without most characters even knowing anything happened. The one character we can be confident actually is/will be affected by the events of this issue is Booster himself, and writer Tom King cleverly zooms in on Booster’s bumbling attempt to course-correct. For me, Booster’s charm lies in his scattered dialogue — basically incomplete thoughts and sentence fragments — that looks a lot like the way King talks (at least at con panels). 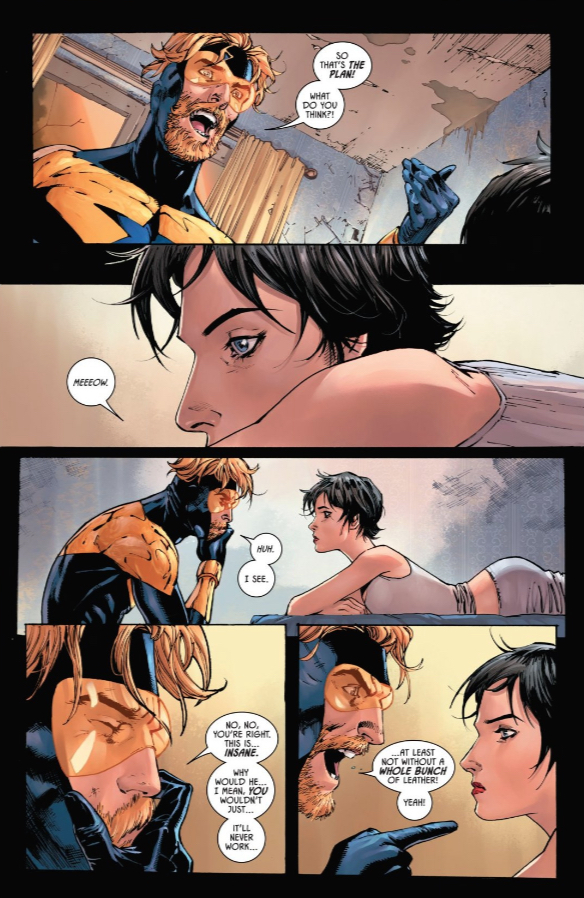 It’s a clever way to give us a kind of half-insight into what Booster is thinking while keeping the actual plan a bit of a surprise. We get the general gist, but he never gets too far into specifics. Only it turns out, he doesn’t have much of a plan, and things go wrong quickly. He wouldn’t be Booster Gold if he didn’t make a hash of things (which also allows King and artist Tony Daniel to backdoor in Michelle Pfeiffer’s stitched-together Catwoman costume from Batman Returns — it was made by a guy who sucks at sewing!), and this is a monumental fuckup, even for him. Only, it might finally reveal to Bruce that he really is living in the darkest timeline, and shake him into maybe wanting to course-correct, to. Here’s hoping he doesn’t do that by killing the Bruce of the real timeline to take his place, a la Evil Abed’s plan.

9 comments on “The Darkest Timeline in Batman 46”