by Taylor Anderson and Michael DeLaney 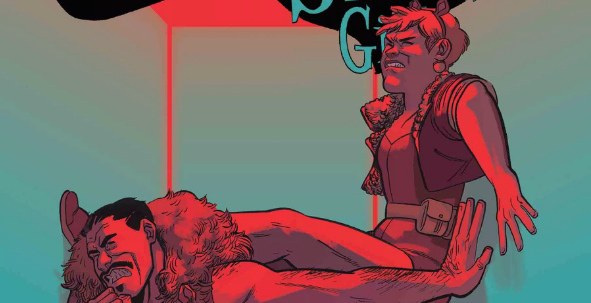 Taylor: Usually when I go to work, I wear contact lenses instead of glasses. Generally, that’s a decision I make based on comfort, or more accurately, on how late I wake up that morning. This being so, people at work don’t see me in my glasses that often and frequently express surprise that I’m bespectacled. My students think it’s hilarious to lovingly (I think) mock me by calling me “Professor Anderson” in their best nerd voice when they see my Clark Kent look. This just shows that superficial changes to one’s appearance often lead to you being seen differently, and the same can be said of comics. Being a visual medium, how things look matters. And when that look changes, it’s a total gambit as to whether it works or not.

Erica Henderson has left Squirrel Girl to work on other projects and Derek Charm has taken her place. Most of the time when a new artist picks up a series, it’s not addressed until the afterward section. However, Ryan North — ever the meta-commenter on his own comic – addresses the change in artists on the first page of the issue.

It’s a coy way of addressing a change many readers of Squirrel Girl, myself included, may find jarring. As comic readers, we become attached to the style of the artists drawing our favorite series. For some, that might be one of the main reasons we enjoy it all. North, in making this comment about someone getting new glasses, is actually helping out fans of Henderson’s art. From the start, we know she’s gone and armed with that knowledge we can read the issue. It doesn’t make seeing a new version of Doreen and company any less jarring, but at least it’s less callous than just starting the issue without any warning whatsoever.

Of the art, I don’t want to be judgmental at this point. I loved Henderson’s artwork so I’m obviously going to be a little biased when assessing a new artist. I say that, of course, but that’s not going to stop me from saying something about Derek Charm’s artwork. 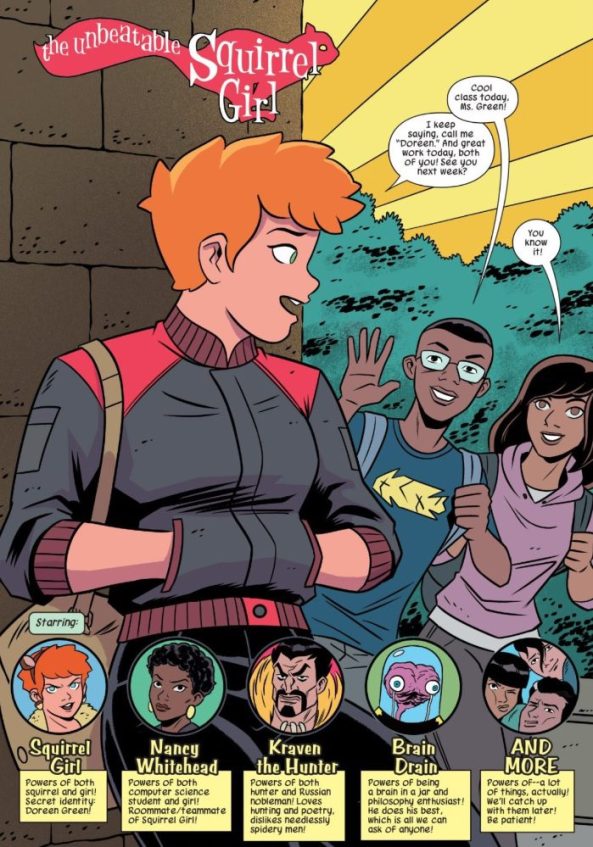 My initial reaction is…eeehhhhh? The primary reason I’m having a hard time feeling positive about the new artwork is how similar the style to comics like Lumberjanes. That’s a not a knock against Lumberjanes in any way though. Let me explain. That series, for better or worse, has been labeled as a comedic one. As is too often the case, this usually means pairing the writer with an artist who has a style editors think is more appropriate for a lighthearted romp. Doreen’s new character design seen above is a good example of what I’m talking about. It’s a bit chunkier, less defined, and more iconic than Henderson’s version of Doreen. Basically it’s a typical character design for a comedic series, such as Archie.

I suppose this makes sense, Squirrel Girl, is supposed to be funny. But I think that was part of what made Henderson’s artwork so much fun. She straddled the valley between the realism of “serious” comic book series and the iconic look of comedic ones. She knew exactly when to draw a character with simple blacks dots for eyes and when to draw hyper-muscular impostor Silver Surfer. I’m not sure if Charm has that in him from what I’ve seen in this issue. Doreen’s look stays the same throughout the issue, which makes me wonder if he has the comedic timing Henderson had in her drawings.

That might make it sounds like I’m down on Charm’s artwork and my promise of not judging it to be a bald faced lie. But wait! There are things I do like about his art which portend a promising future. Again, I’m not so excited for Doreen’s makeover, but I love what Charm does with Kraven, especially in his street clothes.

This design had promise and packs a lot of humor. To start off small, the leopard print scarf and detailing on his shoes is the perfect touch for a man who wears dead animal skins most of the time. That’s a nice touch, but what I love is how Kraven dresses kind of like douchebag. The bomber-jacket, the slicked back hair and sunglasses, tight jeans all point to a man who thinks he’s cooler, and more masculine, than he really is. And really, doesn’t that kind of explain Kraven in a nutshell? This interpretation of Kraven’s character is perfect for who he is and actually has me looking forward to how Charm decides to render other characters in the future. He may be no Henderson, but I just might get used to Charm’s look yet.

Michael, what’s your take on Charm’s art? As I said, I’m biased toward Henderson so I’m wondering if you can offer a more leveled opinion. What do you think of this new story arc? Can Doreen really rehabilitate all her old foes by hanging out with them? And who do you think the new baddy is going to be?

Michael: Taylor I must admit to not being as seasoned of a reader of The Unbeatable Squirrel Girl as you, so Derek Charm’s art didn’t seem all that out of place to me. And while I might not agree that Kraven’s civilian clothes are as egregious as you do, it’s clear that Charm wants to elicit an overcompensating and macho vibe. Just taken a look at the customized decal on the side of his van, advertising his alpha-male hunter status. Also, who drives around in a custom decal van?? Much like the concept of Kraven the Hunter, his vehicular taste is a little outdated. I have a soft-spot for the whacky hunter however, so I was pretty pleased with his portrayal in The Unbeatable Squirrel Girl 32.

It’s clear that Ryan North can also see how silly of a character Kraven can be, making him the perfect addition to Squirrel Girl’s team. I’m not positive that Doreen can successfully rehabilitate her foes, but its completely within her go-to plucky character to give it a shot. I like that she reaches out to Kraven solely out of altruistic friendship. Kraven’s penchant for villainy/hunting Spider-Man is depicted as an addiction, and Doreen is merely concerned that her friend has fallen off the wagon.

One of the best/goofiest sequences of the book comes when Squirrel Girl decides to trust her friend Kraven with her secret identity. Charm uses this opportunity to parody/homage the famous moment in Civil War where Spider-Man reveals his own secret identity to the world.

Charm and colorist Rico Renzi stylize the first panel in the glossy, dramatic vein of Civil War‘s Steve McNiven then immediately return to their simpler “Archie-fied” style. This underlines how important Doreen feels this moment is, and the style shift lets all the air out of that moment when Kraven admits that he knows her secret identity. 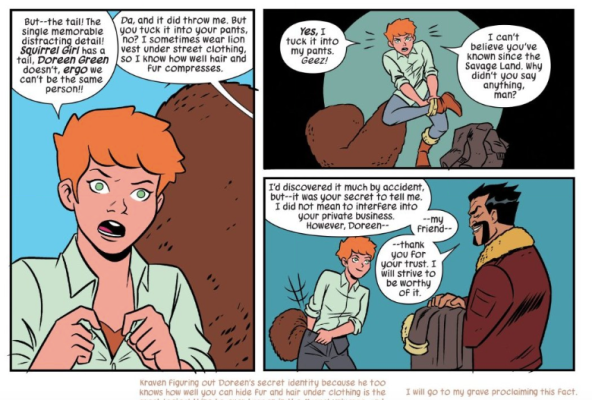 Squirrel Girl uses cartoon science to conceal her secret identity: she tucks her large squirrel tail in her pants when she is in her civilian clothes. Kraven admitting that he knows the difficulty of compressing fur under clothing is the perfect compliment to Doreen’s M.O. It’s pure comic book silliness.

To answer Taylor’s question, I have absolutely not idea who the escape room baddy could be, but it does look like he’s got a large mustache that protrudes from underneath his mummy bandages.

I like the idea of an escape room that doubles as a villainous death trap, which begs the question: what if someone turns the death trap on by accident? Is the idea that hopefully some superheroes will stumble into the death trap, but until then they still need to make a profit? It’s also entirely possible that our bandaged mystery man doesn’t intend to harm our heroes at all, but wants to provide them with a more appropriate challenge when he realizes who they are.

Bottom line: I really enjoy seeing a humorous take on Kraven and would totally read an ongoing book starring both him and Squirrel Girl.