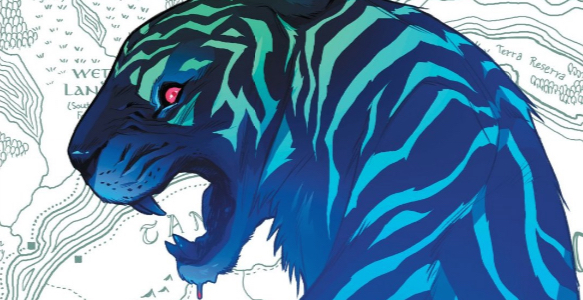 Using color to differentiate settings and characters is not new — even television shows such as Heroes or The Defenders have done it — but I’m still amazed by how well Isola uses the technique. It helps that Msassyk’s colors (combined with Karl Kerschl’s crisp, animation-worthy artwork) are so jaw-droppingly gorgeous — they’d take readers on an immersive journey by that merit alone — yet Msassyk takes things to the next level by constantly varying palettes throughout the issue, shifting his color schemes to indicate new locations, introduce new characters (or bring back old ones), and even just show the passing of time. By the end of the issue things look completely different from the outset, making readers feel like they’ve truly taken a journey with Rook and Olwyn, truly spent a night making their way through this lush fantasy world with them.

It’s easiest to see how Msassyk uses color to mark the passage of time; the issue opens at night, in a world immersed in dark blues, and ends well into the morning, in a countryside bathed in sunlight. It isn’t just that Msassyk and writer Brenden Fletcher show time passing, though; it’s when they choose to reflect that. Rook enters a ruined city at night (with the haze filling the city shifting from blue to purple to indicate the change in location), and as she explores the ruins we slowly start to see the sun peeking over the horizon. The sun fully emerges just as Bendix, a fellow soldier and acquaintance of Rook, appears.

I can practically hear the music swelling! This introduction seemingly sets up Bendix for a heroic role, especially when contrasted with the “scrapper” Rook meets on the page prior, who has a more supernaturally, slightly eerie and menacing purple color scheme that follows her throughout the issue, often taking over panels in which she appears. Of course, the opposite ends up being true — Bendix betrays Rook, while the scrapper rescues her — and the colors do a wonderful job throwing readers off the trail of that particular plot point, at least initially.

The city takes on a yellow glow during the day, but Bendix leads Rook to a library with a distinctly green hue. I suppose there’s nothing too special about different settings having different color palettes, but I love Isola‘s use of them nonetheless, because it makes each setting stand out as a distinct area and reminds readers of exactly how many new places they’re being shown. It reinforces that this is a quest, a journey. Within the library, Msassyk also leans on color to reinforce mood. 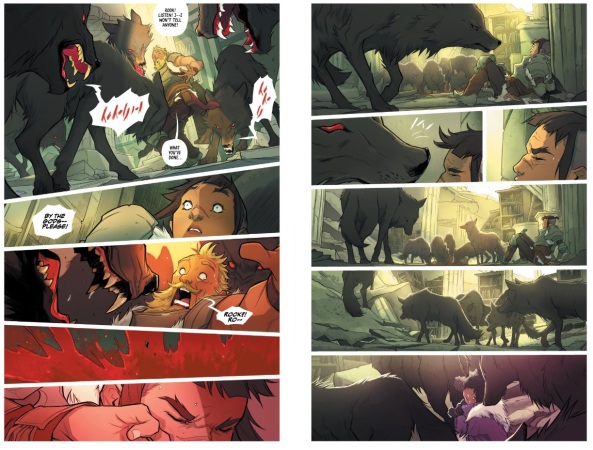 We’ve got the standard green of the library, but that quickly shifts to harsh yellows and reds when the wolves attack Bendix, and that purple returns along with the scrapper in the final panel.

So in Isola, color reflects the passage of time, the appearance of certain characters, and changes in location. Nothing stays the same for long, and that reflects Isola‘s narrative, which is constantly moving forward towards a fixed destination, constantly introducing new players, locations, and twists. What a smart, beautiful, and effective use of color.

3 comments on “A Journey Through Color in Isola 2”