“New York City’s uniformed protectors are under attack by the Hand.” It’s a straightforward premise, one with both obvious drama and an obvious solution: superheroes fight the ninjas. But as of Daredevil 601, Matt Murdock is more than just a superhero; he’s also the mayor of New York. Suddenly those simple solutions don’t seem quite as simple. Charles Soule, Mike Henderson, Matt Villa and Clayton Cowles’ Daredevil 602 illustrate the difference between the streamlined drama of the superhero and the complicated drama of the mayor.

Lucky for all of us, Foggy Nelson appears in this issue to explicitly state that difference, and urge Matt to take his role as the mayor more seriously. Though, it’s hard not to take this sequence in the office seriously. It takes up nearly half the issue and is full of text. Letter Clayton Cowles has his hands full juggling paragraphs of bureaucratic dialogue, and it’s a shockingly easy read. 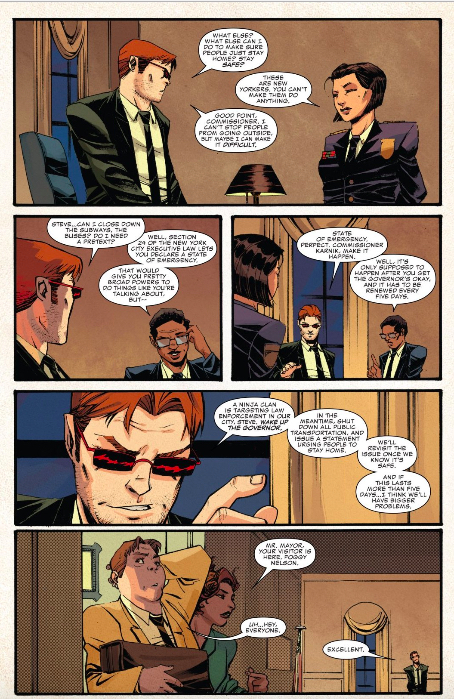 And check out the color of the gutter on these pages. Colorist Matt Villa selects a light tan speckled pattern against a white background, which is immediately evocative of both the building that they’re in and the speech balloons that dominate the page. Villa and Cowles are helping to establish Soule and Henderson’s priorities for this scene: everything points back to safety and negotiation. Then it’s all interrupted by this stunning page: 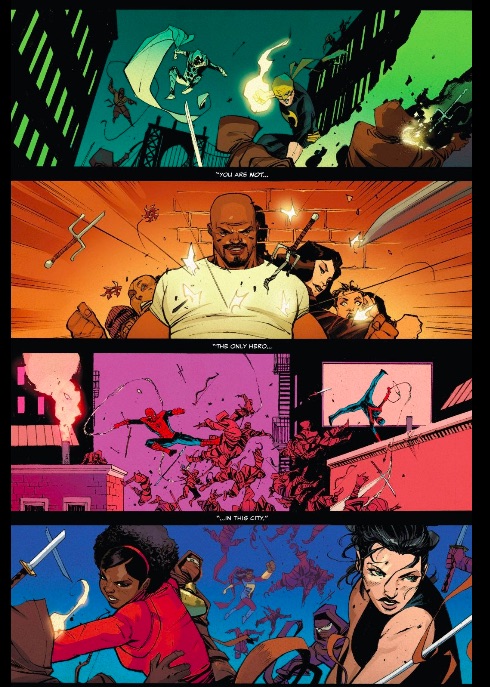 The texture and nuance of the gutter is wiped out by solid blackness, and the word soup served up on the previous pages is replaced by nine succinct, powerful words: “You are not the only hero in this city.” It’s a violation of the priorities the whole team has worked together to establish. But what that violation offers is a kind of clarity – it is more satisfying (and certainly more fun) to see Spider-Man jumpkicking ten ninjas than to be sitting in the mayor’s office.

Of course, that’s exactly the itch Matt Murdock is feeling. The first half of this issue so effectively builds up Matt’s need to get out on the street as Daredevil, and when it actually happens, it’s a huge release. Daredevil and Blindspot tear through Hand ninjas, heroically leap through the air, and even stoically pose over the glowing embers of their defeated enemies.

Which all works until it doesn’t. The issue has to end with a problem Daredevil can’t punch, and a gigantic void in the middle of the police station fits that bill perfectly. This arc has been such a good test for the character of Matt Murdock, and how he balances and values his two identities. I’m not totally sure which identity is the best tool for this job, but I look forward to this team demonstrating the asnwer to me.