Spencer: I think I may have missed the mark a bit when discussing last month’s installment of All-New Wolverine. I claimed that “Old Woman Laura” was a story about redeeming Bellona and defeating Doctor Doom, the last tyrant left in a world that’s otherwise an utopia, but Tom Taylor and Ramon Rosanas have proven me wrong in All-New Wolverine 35, the series’ finale. Those are a part of this adventure, to be sure, but only a small part. What this story is about — what it’s always been about — is giving Laura Kinney the happy ending she deserves.

And to be sure, defeating Doctor Doom and saving Bellona are essential requirements of a happy ending for Laura. She makes that clear early in the issue as she and the rest of her party (Honey Badger, Hawkeye, Captain Marvel, and Wasp-in-a-Doombot) stop to mourn Maria Hill. 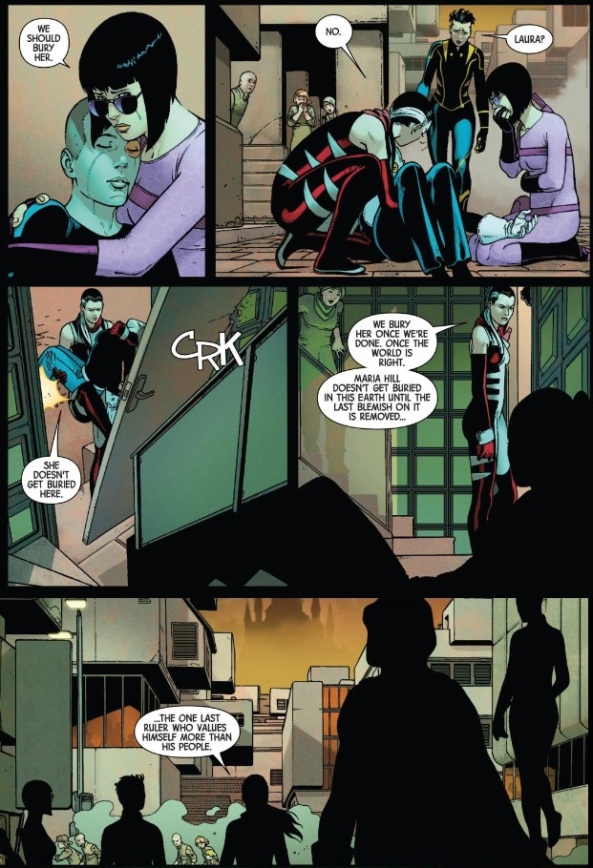 Maria sacrificed herself to help free the Earth from its last tyrant, and Laura won’t stop until that sacrifice has been honored. She owes it not only to Maria, but to the world. Of course, Laura is revealing her own values here, as well: what makes Doom so monstrous is that he values himself more than the people he’s supposed to be protecting.

This makes Doom Laura’s polar opposite. Throughout All-New Wolverine Laura has prided herself in being a better Wolverine, in finding ways to solve her problems that don’t rely on violence and death. She even managed to win over an entire cult formed specifically to murder her by showing its members compassion, understanding, and empathy! In “Old Woman Laura” she discovers that she’s dying, and uses what little time she has left on Earth to make the world even better than it already is. That’s selflessness, that’s someone who truly cares about people. Doom, meanwhile, is dying as well, but he makes desperate, pathetic stabs at immortality nonetheless. What’s far worse are all those he hurts to do so — he’s tortured and imprisoned Bellona and smuggled death-dealing weapons into Madripoor just to get Laura’s attention, and his plan for immortality involves outright killing Laura and taking over her (supposedly) immortal body as his own.

Not only does this make Doom monstrous, but it makes him weak. 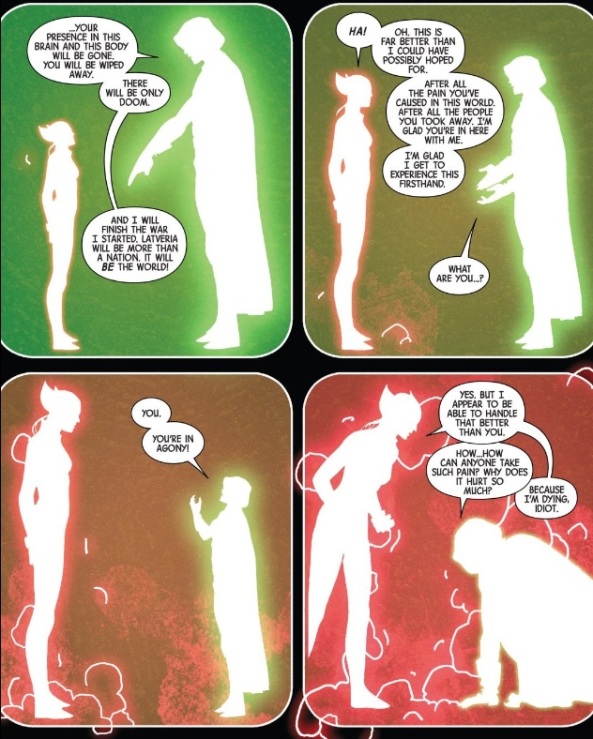 Laura and Doom are both feeling the agony of death, but it practically cripples Doom, sending him running like a dog with his tail between his legs, while Laura stands tall and bears it, barely letting on that it hurts at all. Doom only cares about himself, so the potential loss of his life is enough to leave him reeling — Laura’s selflessness gives her the power to endure, because she cares about people who are (potentially) going to outlive her, and ensuring their future is more important than any pain she feels. Compassion and selflessness are Laura’s greatest qualities, so much so that they quite literally become her greatest strength.

It’s easy to understand why Laura (and readers!) might think that sacrifice is the only way. She’s given so much of her life for others, why would that stop now? Moreover, so much of popular media has taught us that noble sacrifices are the only way heroes get to go out — even Laura’s mentor, Logan, has gone out with a noble sacrifice more than once (including in Logan, Laura’s first film appearance!). But Laura’s entire tenure as Wolverine has been defined by her being better than her mentor, about forging her own path with the mantle. Why should she die like Logan? Why should she die at all, if she doesn’t have to?

Laura has truly earned a happy ending. Doom’s bid for immortality was doomed because it benefited nobody but himself, and because he hurt others to attain it, but Laura’s chance to keep on living is a reward for quite literally bringing about a utopia. In fact, in a way it’s not even the ability to keep on living that’s her reward: it’s the opportunity to become something even better than she already is. The chance to keep on growing, evolving, and helping others — that’s the only fitting happy ending for Laura Kinney. It’s certainly the only fitting ending for All-New Wolverine.

Taylor, I’m so bummed to see this series end — I’m grateful that we’ll continue to see Tom Taylor handle Laura and Gabby over in X-Men Red, and I’m looking forward to Mariko Tamaki’s take in the upcoming X-23 book (even if her retaking that mantle makes no sense), but being Wolverine has been such a great fit for Laura, and it deserved a lot more time in the spotlight. Still, 35 issues is a fantastic run in today’s comic climate, and if it had to end, Taylor of course found the best ending possible for Laura. Still, I wish there had been a bit more time for this final storyline to dive into Bellona, who was still a rather antagonistic figure last time we saw her. Taylor, how do you feel about this one? Do you have any thoughts on Rosanas’ art? And who do you think this new future Captain America is: America Chavez, or Danielle Cage?

Taylor: You know, I have no idea who this new Captain America might be but I’d be damned excited for it to be either America Chavez or Daniella Cage. Why? Captain America has always been a symbol of American values. Therefore, anyone who wears the costume is essentially standing for what’s current in America. Much was made about Sam Wilson becoming Cap because he was a black man, and rightfully so. I think the same could be said about a Latino Woman or a Black Woman being Captain America. It would mean Marvel is saying this is the future of America, this is who represents our country best. That would be a boldy progressive message and I can only hope Marvel has the gumption to actually make it happen.

This new Captain America is freed along with a lot of other Old Person heroes and this is where I really appreciate Rosanas’ art. Drawing aged version of well known characters is hard, but Rosanas pulls it off. 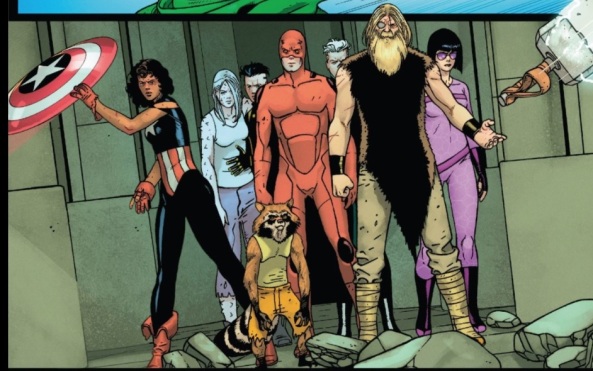 What stands out first is Captain America. Her poised shield immediately draws attention to her and, as I said above, hopefully is a forebearer of things to come. But of the old heroes, I think Rocket’s character design strikes me the most. He’s a bit more hairy, a bit whiter, and has a pronounced slouch going on. All of those are signs of being old and while singularly subtle, these traits paint a perfect image of an aged Raccoon. Thor’s appearance is also done well. Being a god, he either hasn’t aged (or aged very slowly). But Rosanas shows him being older by drawing him like his father, Odin. The longer beard and shoulder length hair along with an eye patch all make him look more like his old man. Part of the burden as we grow older is realizing we look just like our parents and Rosanas uses that to cleverly show that Thor is older in this comic than an others.

Unfortunately Spencer, I don’t share your warm feelings about the conclusion of this issue. While I think your analysis about subverting the noble sacrifice is warranted, I wish it hadn’t come at the cost of a cheap trick. The very first page of this issue shows Laura apparently dying in the arms of Gabby — the sort of flash forward often used in comics to create suspense cheaply.

Laura doesn’t end up dying at the end of the issue, which of course is no surprise. The very fact that Tom Taylor teased her death at the beginning made that plain all along. I’m not even mad that she didn’t die in some sort of noble sacrifice. Rather, it’s offputting the way her death is teased and then quickly overcome. Moments after the scene above, Laura stands up and just walks away from what just before had seemingly been her deathbed. Yeah, she’s Wolverine alright, but the fact that she’s well enough to walk suggests that her death wasn’t even close. This makes that opening page all the more frustrating because not only was it used to create an artificial sense of suspense, but it cheapens the moment between Laura and Gabby.

That’s a frustratingly pedestrian narrative device and it threatens the rest of the issue because it’s so interwoven into the plot. Luckily, there are other aspects of the issue which make up for this misstep. Taylor has a good sense of humor and one that rewards those who are familiar with other Marvel titles. For instance, when Laura first squares off against Doom she sees Thor’s hammer and for a brief moment it seems like she’s going to use it.

She isn’t able to lift Mjolnir, but it makes for a good laugh as she admits things didn’t go the way she had hoped. Gabby similarly laments how awesome it would have been to see a Thorverine. And indeed it would have been cool, but Taylor knows this type of thing has already been done. In the Mighty Thor, a dying woman picks up Mjolnir and wields it for a time and it was excellent. Had Laura done this same thing, also being a dying woman, it still would have been cool (can you imagine wolverine claws charged with lightning?!) but a simple rehash of an already great comic. By tempting his reader with the promise of this actually happening and just as quickly quashing it, Taylor shows a great sense of humor most Marvel fans would appreciate.

So while I might have some issues with the happy ending you enjoy so much, Spencer, there’s still enough here to make this a solid ending for a solid run.