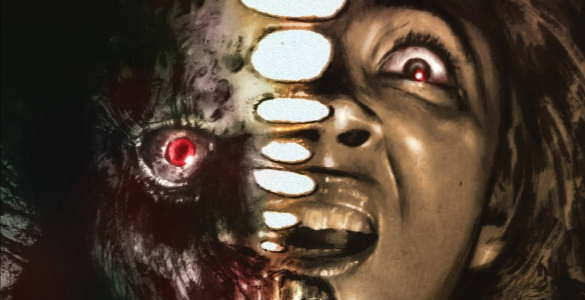 Last month, Patrick remarked on how both real and scary Infidel is — that is, the horrors of this book come from societies worst (but all too real) problems. And they really do seem to come from those problems. For some reason, when I read the solicit for this series, I imagined that the specters in this series somehow caused the islamophobia that runs rampant throughout Aisha’s building; that it was somehow responsible for making people hateful. As we spend more time with them, however, (and as more residents seem to encounter them), it seems like they aren’t so much the cause of the bigotry, but the result of it. That is, they are the manifestation of the fear minorities feel when encountering bigotry.

Or, at least, the people feeling that fear are the only ones who can see the horrors causing it. It’s a fascinating allegory to real-world bigotry being perpetrated by people who don’t recognize it as bigotry. The “I’m not racist, but…” phenomenon. Where last issue made it clear that Leslie and Kris couldn’t see the ghouls terrorizing Aishia, this one suggests that they might still have been feeling their effects. Check out this sequence of Reynolds getting dressed to go out for coffee:

It’s hard to overemphasize how clever of a concept this is. Like all bigotry, these ghosts are a malevolent force that is invisible to virtually everyone but its victims. Sure enough, none of the people acting racist in this issue recognize their own behavior as racist. Just look at Haley’s attempt to assure Medina that she’s not racist:

She’s basically arguing that she’d be justified in being racist, but that she happens to hate this particular Arab for different reasons. But, you know, if you dislike/distrust someone for legitimate reasons, you wouldn’t need to address whether being racist is somehow justifiable. It’s that kind of twisted logic that allows racism to persist in the real world, perpetrated by people who agree that racism is bad, never seeing how their attitudes contribute to that problem.

Writer Pornsak Pichetshote and Aaron Campbell have landed on something really insightful here, using the supernatural to simply highlight the cycles of hate that permeate our society. Of course, they’re also laying some ground work to explain that supernatural element, introducing some occult-obsessed former tenant that may have somehow invited or created or otherwise tethered these ghosts to that building. Intriguingly, that concept is introduced as Reynolds and Ethan are getting into the weeds on what is or isn’t racist. This series seems like it’s preparing to get much more specific about the edges of racism (and maybe its causes). It’s not the type of subject matter I’d trust many creative teams to handle well, but Pichetshote and Campbell have demonstrated an ability to pack nuance into this horror premise. I can’t wait to see where they turn next.

6 comments on “The Worst Horrors in Infidel 3 are Real”