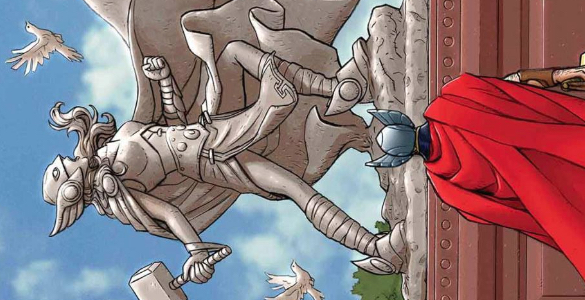 The Mighty Thor: At The Gates of Valhalla isn’t what most readers probably thought it would be. Despite the timing of its release, it’s explicitly not an issue meant to transition from The Mighty Thor to the upcoming Thor — outside the cover, Thor Odinson doesn’t even put in an appearance — and despite the title, it spends no time in (or near) Valhalla, Jane’s Thor likewise doesn’t appear, and Jane herself has relatively little screen time. Instead, this special serves as a road map for the future of the Thor mythos, and especially for Jane’s place within it.

The issue is split into two stories: Jen Bartel illustrates “The Tomorrow Girls,” which finds the Goddesses of Thunder (Frigg, Ellisiv, and Atli, King Thor’s granddaughters from the far future) venturing into the past, while Ramon Perez illustrates “The Lord of the Realms,” which finds Malekith the Dark Elf taking a stroll throughout the ten realms, sizing up how his war has ravaged them.

While both stories find writer Jason Aaron returning to characters and storylines that have been on the back-burner for a while, the one thing they truly have in common is that both stories are secretly about Jane Foster. First of all, the Goddesses of Thunder have traveled to the past specifically to meet Jane. 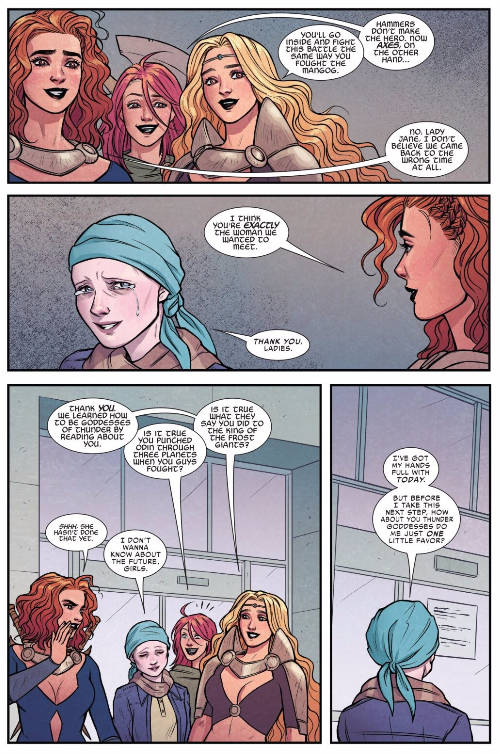 Jane inspires the Goddesses of Thunder in the same way she inspires so many of her readers (especially, but certainly not limited to, female readers). It’s a beautiful reminder of why Jane’s tenure as Thor was so important, but then Aaron lets it slip that Jane still has adventures to come, still has a place within his upcoming plans, within the War of the Realms she spent so long fighting.

That’s the thrust of the second story. After reminding us of what an absolute jerk Malekith is, Aaron reveals that neither Malekith nor Dario Agger have forgotten about Jane Foster. They still want revenge, and both she and Earth are still very much in their crosshairs. This should be exciting to any readers (such as myself) who were disappointed to see Jane lose her hammer before the War of the Realms came to a close. Jane still has an important role to play in Aaron’s epic, and while that’s bad news for her, it’s great news for readers.

2 comments on “A Roadmap for Jane’s Future in The Mighty Thor: At The Gates of Valhalla 1”