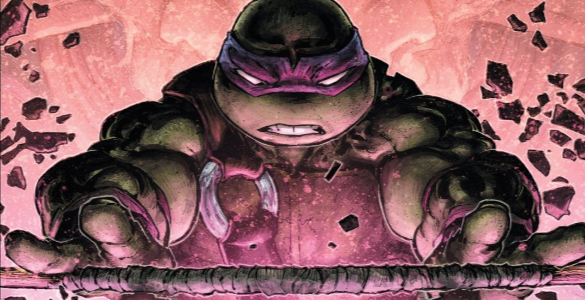 He’s on a mission of peace — acting as arbiter between the Utroms and Tricertons as they try to work out a truce to coexist on Burnow Island. While that’s his outward reason for being there, Donatello is also there because he’s hoping that by helping two warring factions reach peace, he’ll somehow earn some of his own. 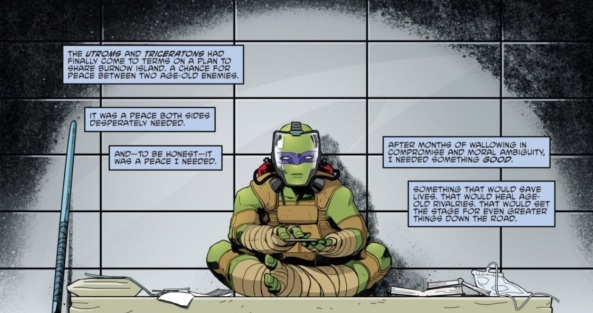 Donatello has been dealing with some heavy stuff recently, what with his father, Splinter, skirting the lines of goodness. That means that he and his brothers have been put in the hard place of choosing between what they believe is good and their loyalty to their father. Donatello sees his work as a diplomat on Burnow Island as a way to get away from it and affect some positive change in the world.

This is nice little adventure for Donatello and grows his character effectively. The writers of TMNT have always done a wonderful job of acknowledging that the turtles are indeed teenagers, and have them act according to their age. Here, Donatello is striving to make his impact on the world, like so many teenagers and college students who campaign for social change or join various just causes. He’s looked around at this life, seen it for the mess that it is, and has determined he wants to make better of it. For Donnie, that means trying to make the world a better place. Lucky for him, that means he may also find a little peace for himself. It may not be an easy peace to attain, but as with most things, Donatello learns that the things that are difficult are often the ones most worth doing.