Comics have always reflected our real-world fears — from inner-city crime or nuclear panic — by heightening them to exaggerated extremes. Except, I’d argue, when it comes to the X-Men’s persecution. Sure, the X-Men’s superpowers would qualify as an “exaggerated extreme” of the types of differences that normally mark a minority class, but it’s straight-up not possible for writers to come up with more exaggerated ways societies persecute their minorities. From apartheid to lynchings to genocides, there’s nothing the X-Men have faced that real-world minorities haven’t already suffered, grounding even their most fanciful stories in sober reality. It’s a fact that Tom Taylor and Mahmud Asrar have leaned into from the start of X-Men Red, lending the series a “ripped from the headlines” approach that is truly unique in superhero comics.

For issue 4, the topic is how easily elections can be manipulated by fear and bias on social media. It’s a fact we’re still coming to grips with as a society, so Trinary’s summary feels extremely topical. 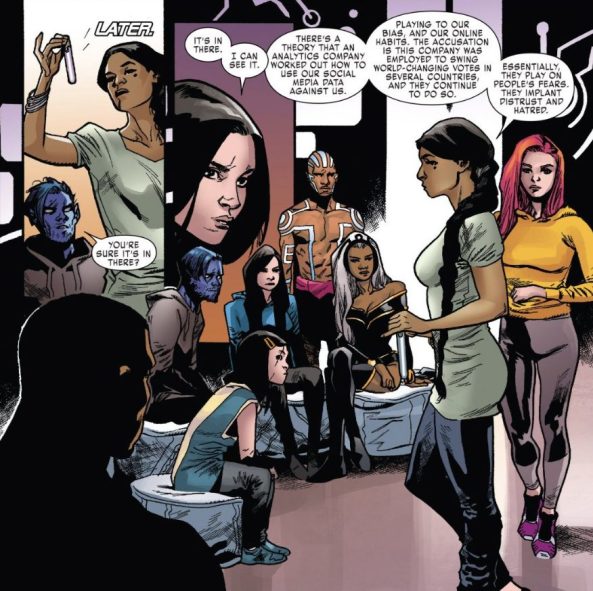 She goes on to suggest that the nanites they discovered in Ororo’s brain are a suped-up version of that, but it’s almost not necessary — we all have firsthand experience of how potent and toxic that kind of manipulation can be, even without any sci-fi augmentation. But Taylor and Asrar put an even finer point on it, showing Cassandra Nova implanting those nanites in world leaders — though again, we’re already quite familiar with how our leaders can be manipulated by media that confirms their biases.

Pitting a superhero team against such real-world forces as hate and bigotry is daunting, but has been the X-Men M.O. from the very start. Taylor and Asrar are daring here, for sure, but the tradition of the X-Men more or less demands it. Moreover, they’re handling themselves remarkably well. In between all of that commentary, we’re treated to character moments that are by turns touching and silly. Taylor has a solid handle on all the characters here, but his head-start with Laura and Gabby allows them to steal every scene they’re in.

There was no way I was not going to feature this moment in a write-up.

The effect is a feeling of very real characters dealing with very real problems. I have no idea what the solutions will be (and the pessimist in me doesn’t have much hope), but the struggle will obviously be cathartic. That’s worth sticking around for, at the very least.