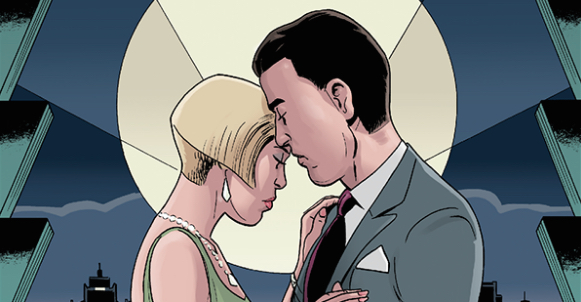 Dark secrets are the number one motivator in noir, whether they’re motivating criminals (or witnesses) to hide the truth, or motivating detectives to uncover it. Indeed, the world of a noir story often feels like everybody has a deep dark secret they’re hiding from the world, leaving the detective with nobody to trust. It’s a great way to goose the tension of an investigation, but it can also feel a bit over-the-top, as though the secrets are there specifically to complicate the narrative. I don’t know how many times I’ve seen a suspect be evasive about their alibi because they were with a mistress or something, but more than enough to spot it a mile away. Which makes the secrets in Incognegro Renaissance 4 a refreshing change of pace. Here, the secrets aren’t reduced to some underhanded act the characters want to hide, but are tied up in their very identities. The result is a much more interesting and nuanced vision of secret lives that draws on the realities of 1920s Harlem, as opposed to the fantasies of noir’s criminal world.

Zane has already uncovered Bette’s secret — that she’s also incognegro — but that’s far from the end of his investigation. Now able to be honest about what was at stake for her, Bette leads Zane to Douglas, who has a dark secret of his own: he’s gay. Suddenly, Douglas’s role in this story takes on a new life; he wasn’t a friend who had a falling out with Xavier, but an unrequited lover who blamed Bette for stealing the attention of his crush. She didn’t know his secret, and he didn’t know theirs, which led to a whole mess of confusion between the two. Of course, Douglas’s secret isn’t the end of Zane’s investigation, either, though it does lead him to what might be: it looks like Van Horne stole Xavier’s book, and is doing everything he can to cover up the evidence.

It’s another secret, again tied up in identity. Where Bette is trying to pass as white and Douglas is trying to pass as straight, Van Horne is trying to pass as an insightful writer of the black experience. The effect is a clear sense that the world would be a simpler place if people could just be honest about who they really are. With the benefit of 100 years of progress, desegregation, and gay rights, Bette and Douglas might not have to live these lies if the story were set today, but there’s no societal remedy for Van Horne’s lie — it’s one of those regrettably timeless lies that is not-so-coincidentally given by the most powerful straight white man in the story. His is driven by greed, rather than fear, and marks his lie with malice where the others feel relatively benign.

It’s a testament to writer Mat Jonnson’s plotting that I never saw any of these twists coming, but the in-the-moment suspense owes a great deal to artist Warren Pleece’s sense of pacing. I’m a particular fan of the moments where Pleece slows or speeds up a scene over the course of a page, either ramping up from one panel per row to three, or ramping down from three to one: 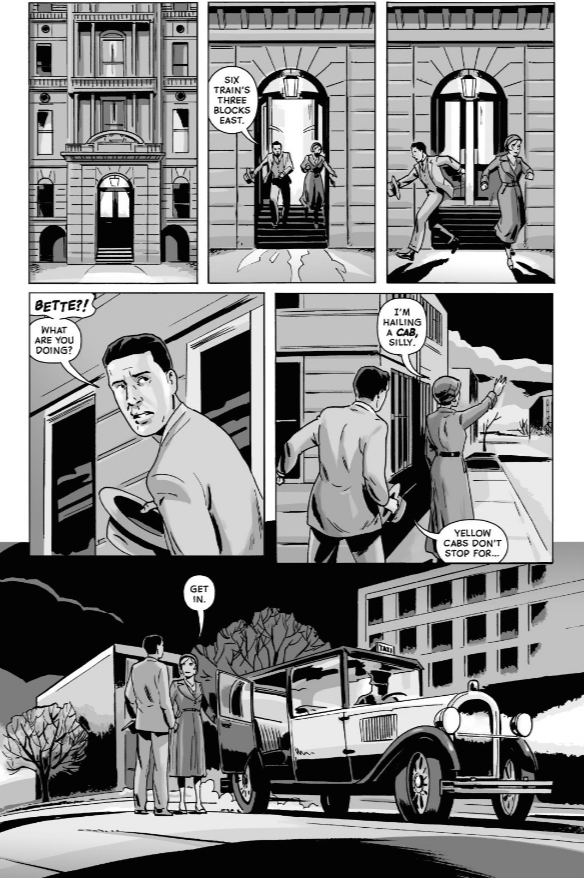 There’s a clear sense of slowing down in this sequence, giving that final image this remarkable sense of space. The full bleed on that final panel helps sell that space, but I think this layout really primes us for it, starting with that rapid-fire three-panel column, the slightly looser two-panel column, before really settling in for that moment as Bette opens the cab door. It lends this moment the weight it needs, emphasizing the power passing for white gives Bette, transitioning us from the thrill of the chase to the more quiet scene in the cab. It’s just good storytelling.