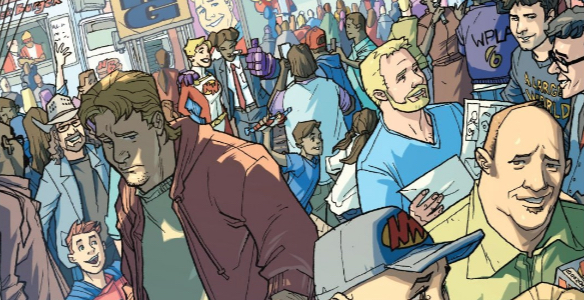 None of us, no matter how many years we’ve spent dreaming about it, are ever going to get superpowers, and few of us will ever have a real chance to change the world. Those aren’t the only ways to be a hero, though. Sometimes being a hero simply means helping or standing up for one person, or even yourself — sometimes it’s heroic just to show up, to try and get your life in order even when you’re scared. Eddie Gorodetsky, Marc Andreyko, and Stephen Sadowski’s The Further Adventures of Nick Wilson has always been a series that’s found adventure in life’s mundane moments, so it’s no surprise that its finale finds heroism in the same kind of small, relatable victories.

In this case, Nick’s victory really is just showing up — or, at least, that’s a part of it. On the day of the opening of the Nick Wilson museum, Nick suddenly (and unsurprisingly) gets cold feet, driving investor/boss/former archnemesis Clive Morgenfeld mad, sending poor Xavier on a frantic search, and leading Jane right to him for a pep talk. It’s Jane who gives Nick the encouragement he needs to face this grand day, not only by showing up for his appearance at the museum, but by tracking down the woman he spoke to in issue two, Coco, and asking her to accompany him. She says yes!

These are both personal victories for Nick, a man who’s often been stuck in his past, afraid to make a commitment, take a chance, or face the public. That said, his greatest victory — and thus his most heroic — is the one that doesn’t involve him at all. Nick may not want to face Clive, but after watching him and his lackeys push around and degrade Xavier all day, Nick feels far worse than him, and uses every bit of leverage and platform he has to force Clive into opening a LGBT foundation in Xavier’s name. 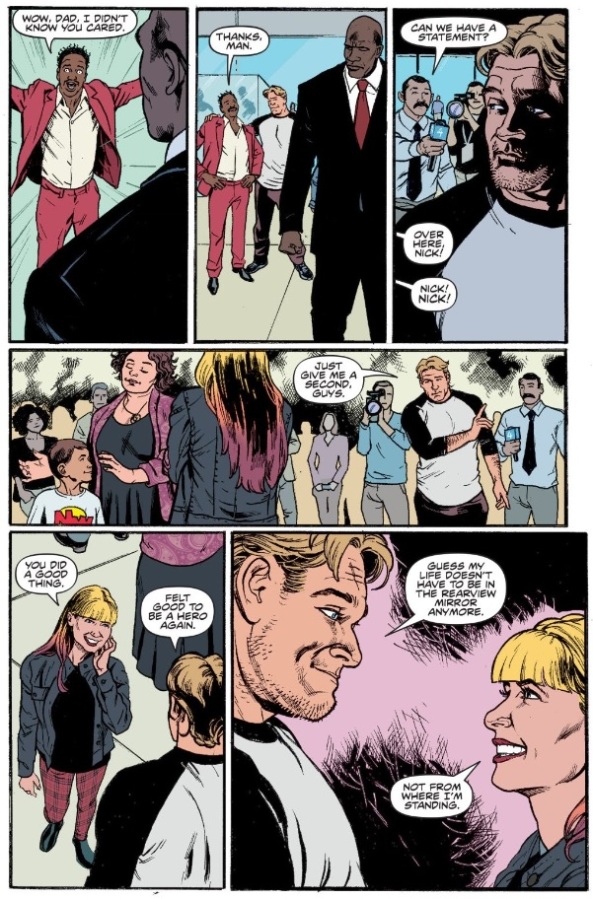 Maybe Nick can’t fly or lift buildings anymore, but he can still help people in his own way, and it still feels just as good as his superpowered victories ever did. The loss of Nick’s powers has often been used as a metaphor for aging in this series, and it goes to show that even as we get older, as our lives change and our strength and energy fades, we can still find ways to be powerful. Our adventures never really need to end if we keep moving forward and taking risks, if we keep our heart open to others, and if we’ve got good friends to help us along the way (and I love that Nick and Jane’s beautiful, platonic friendship is the heart of Nick Wilson).

The issue (and series) ends with a kiss that artist Stephen Sadowski plays as big and heroic as possible, framing it from a worm’s eye view and surrounding Nick with friends, fans, and enemies. It might as well be a splash page of Superman clocking Brainiac, or something equally epic — in the mind of Nick Wilson‘s creative team, there’s no real difference. The mundane can be just as extraordinary and satisfying as any fiction, and that’s a powerful message for all of us.