There’s an intangible quality to most of your favorite art that belongs solely to that work. Maybe it’s a voice, or a take, or a perspective, or a rhythm. It’s that magical X factor that makes you say “that’s a Farside joke” or “that’s a Stevie Wonder horn line.” Curse Words’ DNA is so hard to nail down — a mix of crass irreverence and hopelessness, with a jolly veneer that just barely hides some genuine darkness. Issue 14 drifts away from Wizord and lets this lurching aesthetic take center stage.

Luckily, it’s the kind of aesthetic that leads to a meanie-bo-beanie sun flipping off our characters as they trudge through the wastes to Tiger Territory. 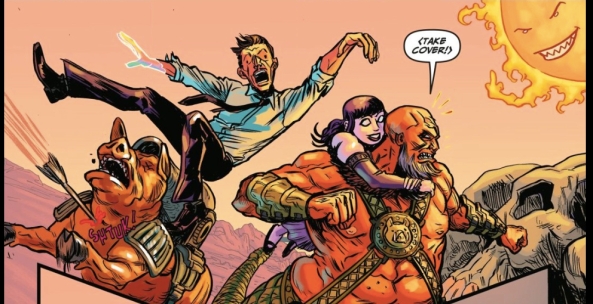 I’d love to see what Charles Soule’s script says for this page. Is artist Ryan Browne following specific world-building marching orders here, or does his chaotic nature just randomly populate the sky with a sentient (and rude!) sun? The panel is already steeped in some of the crazier aspects of Curse Words lore, including Jacques’ glowing magic-hand, but the seemingly innocuous anthropomorphic sun steals the damn show.

This is actually a pretty concise distillation of Curse Word’s aesthetic — a tiny detail that makes the reader cock their head to the side with a bemused “huh?” I’m convinced that this is where Soule and Browne are their most comfortable. In this issue, Ruby Stitch discovers that she doesn’t have any magic left. Her power is divined from celebration, so she uses her last shred of magic to make three dudes “party” on the streets of New York City. 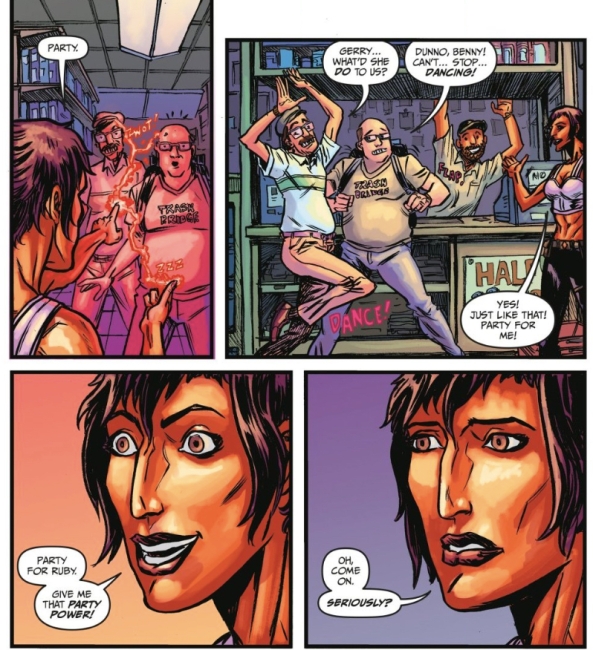 I love love love Ruby’s reaction here. Magic isn’t this cool, romantic, powerful thing you imagine it to be — it’s a lot grosser and more disappointing that anything called “magic” should be allowed to be. Browne’s acting on Ruby is just about perfect as she realizes her plan is never going to net her the kind of power she needs to find and rescue Margaret. (And shoutout to Addison Duke, who is co-credited on colors with Browne, on taking that nice warm background and cooling it for Ruby’s disappointed face.)

This issue doesn’t really show us how Ruby deals with this disappointment, but we do get that kind of resolution elsewhere. The Confounders are struggling with the fact that a bunch of them have already been killed and they’re only getting weaker. So what do? They quit and or betray their own cause. The technomancer talks the best game, articulating exactly why the Confounders should walk off the job, but it’s Candace who actually has the courage to disrupt the operation. Margaret gives his kind of a cryptic clue:

We can see the difference between these two characters in adjacent panels — Candace’s rebellion is based on a one-on-one social interaction, while the technomancer shouts in the direction of a disembodied voice. By the way, that’s the last of see of Mr. Backwards Cap. Candace follows up on “oh one one is Margaret,” sorta marking as the one thing worth fighting for in this world. I mean, that’s what Wizord and Ruby were fighting about at the beginning of this issue, right?

I guess the question is: is Wizord too un-sentimental in his quest to save his daughter? Or is Ruby just looking for a reason to lash out at him? It’s interesting that we stay away from Wizord for the majority of the issue, but check back in with him as Platinum Johnny and his pregnant girlfriend stop by for help with a “magical problem.” I don’t know about you guys, but I read the pregnancy as the problem, even has Johnny says “we’re having a baby!” But maybe that’s just me. Again, we don’t get to see Wizord’s reaction to this news — is he excited about a magic baby? Maybe he’s just seeing his own past play out again for a brand new set of suckers.