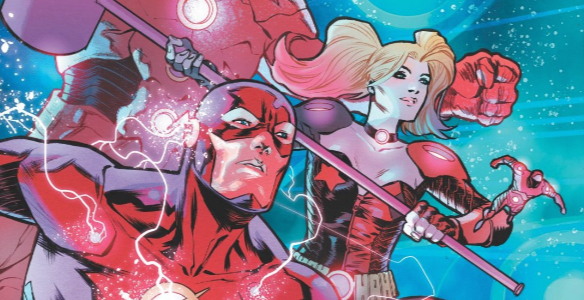 Drew: Okay, that epigraph is maybe too cute by half, but seriously, what does it mean for “everything” to change? The closest parallel I can draw to real life is the conventional wisdom that “a baby changes everything,” but even then, we understand “everything” to be decidedly limited in its scope. Certain events might be life-changing, but only for those with some connection to said events. And yet: comics. Big crossover events are promoted with the promise that the events with change “everything,” and while we might understand “everything” to be limited to the folks involved (in the same way that it is for a birth), there’s also tons of details we might assume exempt from “everything,” from the laws of physics to the peculiarities of english grammar — some things never change. Even so: some comics events are bigger than others, so there’s a range of just what “everything” means. Maybe it’s interpersonal dynamics of the superheroes involved, maybe it’s the principles of the universe as we know it. In its finale, Justice League: No Justice reveals that it falls almost entirely into that latter category, sending the DC Universe into decidedly uncharted territory.

This issue features the death of the Entropy Omega Titan, but precisely what that means isn’t entirely clear. The one thing we know for sure about that particular entity is that it got to eat planets who featured entropy more prominently than mystery, wisdom, and wonder, but beyond that, I can’t really say. Does entropy no longer exist in the DC Universe, or does it now exist unchecked? Is entropy more or less likely to be a force in the DC Universe moving forward? The issue doesn’t break one way or the other, but it is insistent that things have changed, as the Martian Manhunter assures us:

Indeed, the issue reassures us several times that things have changed, but while everyone seems to agree on that point, nobody knows exactly what those changes mean.

That makes for a decidedly forward-looking ending, not so much concluding this story as it is setting up the next one. It’s decidedly effective — I’m excited to see what this might mean, both within co-writer Scott Snyder’s upcoming Justice League series, as well as the DC Universe at large — though perhaps at the expense of this miniseries. Specifically, while “change” might mean new teams and new directions for a lot of these characters, this miniseries does little to establish what change would actually mean for these characters. Were any of these characters looking for a change? We’re any of them resisting it? Is it exciting to some, scary to others? The stakes of this series seem to be shouldered on “The DC Universe” as a whole, which means they don’t really exist on a tangible, human scale.

I know that sounds like a gripe, but I mean it as more of a neutral observation. Co-writers Snyder, James Tynion IV, and Joshua Williamson, as well as artist Francis Manapul, are all masters of human-sized stakes, hooking us into the people at the centers of their superhero stories, so I have faith that these events will be thoroughly mined in their respective series going forward. Which is probably exactly what this series was designed to tease. The final page features glimpses of all of the new Justice League teams, each helmed by one of these writers, and whose solicits suggest a more thorough unpacking of the events of this series. I trust implicitly that the human stakes will be fleshed out.

For now, though, the hook is the death of the Entropy Omega Titan. Which, again, might mean anything. For his part, Manapul ties that death to a returning sense of order. Take a look at one of the more chaotic layouts leading up to that moment: 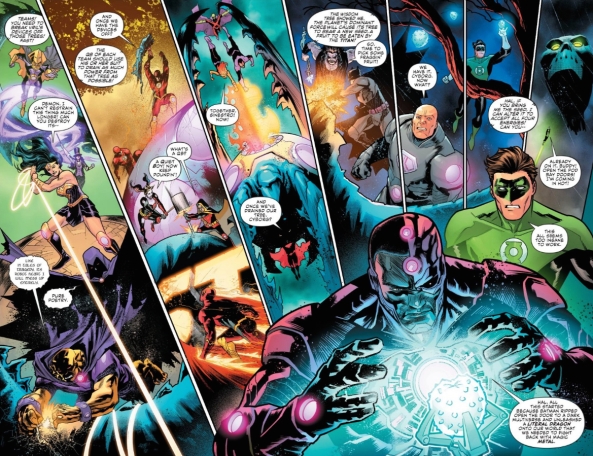 Pay special attention to the right half of this page, and specifically Hal Jordan’s journey across it. Where the first half of this layout (and indeed, the rest of the issue) holds fast to “one moment, one panel,” here, Manapul breaks up a single larger image into three seemingly concurrent panels, then overlapping all of them with the final exchange between Hal and Vic. Those techniques all work to condense the events of those panels in time, as if everything is happening so fast, we barely have time to process them chronologically.

And it’s hard to capture this in excerpts, but that sense of chaos completely disappears after this moment — Manapul sticks to standard rectilinear panels after this sequence. It’s a choice that suggests that the force of entropy itself may have been affected by the events of this issue. Precisely how and what that means remains to be seen (notably, Braniac’s entropy team, apparently convened to generate entropy, remains unharmed), but Manapul’s choices here may be revealing.

Spencer, I can’t wait to hear your thoughts on this issue. Scheduling snafus have kept us from getting a proper discussion of this miniseries, but your piece on issue 3 suggested that you were pretty excited about it. Did this issue manage to live up to your expectations? Did you find more character arcs to hold on to than I managed to? I realize some of that may be linked to our investment in larger DC Universe goings on, which I’ve been sleeping on as of late. Did any of these events have a grander meaning that I’m missing out on?

Spencer: Well, I think most of the “grand” changes are made pretty apparent within the issue itself. The Source Wall is still cracked, leaking multiversal energy (despite the best efforts of the Green Lantern Corps) that could eventually lead to the death of all existence. The Omega Titans were summoned early, then left unbalanced and rebuffed. Neither of these will have immediate ramifications, but it seems likely that Snyder and company have the aftershocks of these events all planned out and taken into consideration.

The biggest changes honestly seem to revolve around team configurations. The new Justice League line-up proper was already decided upon at the end of Metal, but the No Justice creative team do a fine job of rooting the rest of their new teams in, not only the events of No Justice, but the toll they’ve taken on the characters. 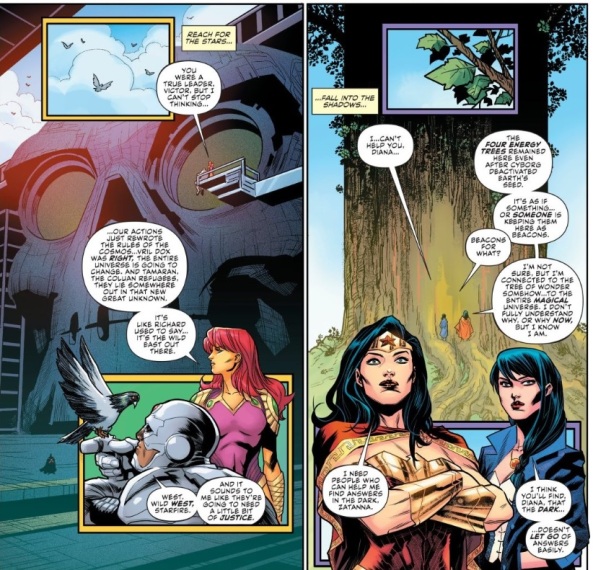 All of the planets held captive by Colu have been released into a new sector of space, and they’ll need help adjusting to their new surroundings and neighbors. Starfire was already the hero most empathetic to their plight, but the fact that her homeworld of Tamaran is among those newly released planets makes her desire to help them all the more personal. Wonder Woman’s mission, meanwhile, is entirely personal: she wants to learn more about her connection to the magical spectrum of the DC Universe. Each of these new Justice League titles seem to have a niche and a mission statement going forward, and No Justice has done an excellent job of providing an origin and foundation for those teams moving forward.

Even non-League teams get some attention. The introduction of Batman’s new team of Outsiders admittedly feels a bit forced, but that same panel features a brief mention that “Robin has decided on his own way of doing things.” Damian’s team of Teen Titans appears to have been dismantled by the events of No Justice — the majority of the roster participated in the battle, and at least one of them (Starfire) is now flying off with a new team. With upcoming Teen Titans writer Adam Glass bringing in a new roster, this implies that the changes in the team are motivated by everything Damian saw throughout No Justice. Even if it’s never referenced again, it’s a smart way to show that what happened in this series had consequences, not just for the universe at large, but for the characters who lived through it.

Actually, while the massive cast doesn’t leave much room to dive too deep into any one character, I thought just about every hero involved in No Justice was used smartly. They all had a purpose, even if it was just to cause conflict for other characters (such as Sinestro or Deathstroke), and I was impressed by some of the big heroic moments some characters got: Cyborg getting to save the day by creating a plan that combined both his areas of expertise (mechanics and football) is the best bit of characterization he’s gotten since the New 52, which is, admittedly, a low bar to clear, but still impressive. Some of the best changes in No Justice were ultimately the result of characters’ actions, not universe-level upheavels: both J’onn J’onzz’s and Oliver Queen’s new positions as League Chairman and League Oversight, respectively, are influenced by the empathy, courage, and fortitude they showed throughout the series. As I said when discussing issue 3, No Justice is intricately plotted on a universe-wide scale, but all that plotting is rooted in character, and as far as I’m concerned, that makes it all incredibly effective.

What I ultimately found most interesting about No Justice, though, is the themes it explores. It’s been a series about finding balance, and issue 4 leaves the universe, and especially the Earth, more off-balance than ever before. It’s not just the death of the Entropy Titan, but the reveal that Earth leans more towards Entropy than any other aspect, that really drives this home. The belief that Earth is a lawless world where survival matters more than anything is what drives Amanda Waller throughout the entire series (a perspective the creative team clearly condemns), and now the very fundamental forces of the universe themselves seem to be backing her up. It’s enough to convince Luthor, if no one else.

Up until now Luthor has, ostensibly, still been the hero he declared himself to be after Forever Evil. When the time comes to power the Entropy Seed, though, it’s only Luthor who can do it. What he’s seen has been enough to drive him back towards, if not outright villainy, than certainly self-interest above all else. Again, it’s another change rooted in character and consequence, but also in theme. This creative team keeps asking the question: is there any room for justice in the world?

The answer seems to be: Yes, and the Justice League is going to make sure of it. I love this, because it creates a far more specific mission statement for this incarnation of the League than just fighting evil or saving the world. It’s the League’s job to prove that the world can be a just, fair, and safe place, that looking out for others is more useful than self-interest and chaos. This will be a Justice League that truly stands for something, and that will likely be looking to change the world on a totally different scale than ever before. I can’t wait to see that explored further.

So ultimately, No Justice is so much more than a teaser for the upcoming Justice League titles, even if it does do the heavy lifting to set all those new books up. It’s a series that proves that these creators can handle both high-concept plots and character work at the same time, and that they can do so with flair, and in a way that has an effect on everyone involved — there’s no fluff here. No Justice has taken me from being ambivalent towards the new Justice League titles to outright excited, so I’d say it succeeded in its job with flying colors.