Matt Murdock’s modern history is a delightful roller coaster of changing status quo: he’s been a vigilante, the kingpin of crime, a vessel of The Hand and now Mayor of New York City. In Daredevil 603 Charles Soule draws upon these experiences to highlight the fact that Matt is a master strategist and impressive leader. “The Man Without Fear” preys upon others’ fears in order to manipulate them.

New York is under siege by The Hand’s attack — ironically the reason Matt has risen to the mayoral office. Matt does some good old-fashioned Daredeviling for the first several pages, but spends the majority of the book in his mayor super-suit. Mike Henderson briefly shows Daredevil landing a single punch to a Hand ninja, but Matt’s most effective blows come in the form of manipulation.

What’s important to note here is how naturally this kind of trickery comes to Matt Murdock. As I said, Matt is portrayed as a strategist here, and it seems very clear that Matt enjoys being the one holding the puppet strings. 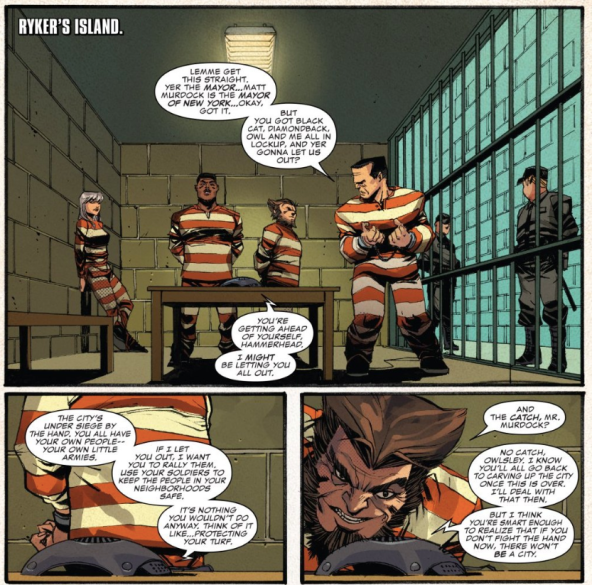 Having the hero team-up with his enemies in the face of a greater foe is of course not a new concept in comic books. Matt is desperate so he makes the tried and true deal of “if you want to bad guy in this city, you’re gonna have to save it.” What’s more telling is the way that he enlists Elektra’s help.

Matt has an intimate knowledge of Elektra, and in a way he’s abusing this knowledge to his advantage. Granted Elektra is loose-cannon assassin that needs to be held on a short leash. But there’s a certain cruelty to the way that Matt lords the information of Elektra’s “psychic abuser” over her head. Matt can be a cold sonofabitch when he’s determined to stop the bad guy.