Patrick: Let’s run a hypothetical scenario: you’ve got access to a shared universe, full of superpowered characters, all of whom you’d classify as either heroes or antiheroes. You want to pit them against each other, in a… I don’t want to call it a “Civil War” for litigious Disney-related reasons… we’ll say it’s a “Harbinger War.” How do you establish sides? Pick an ideological divide and let it split up your character base, right? That’s a fun, toothless way to pit all your favorites against each other! With Harbinger Wars 2, writer Matt Kindt is crafting a more direct criticism of structures of power, casting the dutiful soldiers and company-men as stooges. It’s a clash of superheroes with the courage to say “hey, some of these guys are wrong.”Chief among those stooges is X-O Manowar himself, Aric of Dacia. He’s how artist Tomás Giorello introduces us to X-O Manowar: 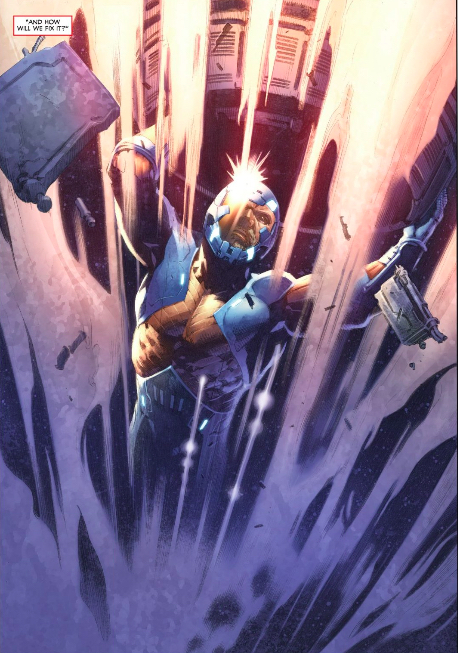 Aric blasts onto the scene saving earthbound satellites against a monologue about “humanity look[ing] to the skies in horror.” He’s snatching a G.A.T.E. satellite out of free-fall here, which effectively means he’s working for a global government agency. Aric is also freshly back from some adventures in outer space — adventures that he’s not eager to discuss. So he’s a private dude, with access to advanced alien technology, with a default mode of helping out the government. He’s Superman. The scene aboard The Loveboat only enforces his connection to some implicitly and explicitly American ideas and values. The first one is kinda subtle and tumbles out of G.A.T.E. leader Colonel Jamie Capshaw. Here’s how she thanks X-O Manowar:

“It’s good to have you back, Aric. The satellite you rescued is the first small step back to normalcy.”

That emphasis is added by me. Prior to Warren G. Harding’s use of “normalcy” in his 1920 presidential campaign, the word was primarily a mathematical term. Harding was even slammed by critics for his use of the word, and many newspaper editors corrected it to “normality.” (Interesting side-note and weird parallel to our current dipshit president: Harding responded to this by claiming he looked for normality in his dictionary but didn’t find it.) Harding’s accuracy notwithstanding, “a return to normalcy” after World War I is a strikingly American conceit.

If Capshaw is the scalpel, then Major Charlie Palmer is a fucking baseball bat. How obviously does he present an over-militarized American-style world-government? You tell me.

Rounding out the team of stooges working for the man is Colin King, aka Ninjak. If you don’t know Ninjak, he’s a proper English gentleman who is also a ninja. Kindt expresses his Englishness with some casual “bloody”s and “mate”s, while also having Ninjak name drop both MI6 and the U.S. as his employers. He’s a weird walking demonstration of colonialism, cultural appropriation and white supremacy.

Those are the guys on the side of law and order.

Which of course leaves us with the other faction, which is made up of two different groups that are helping Psiots avoid capture by G.A.T.E. On the east side of the country, that’s represented by Peter Stanchek and the Renegades, and in So Cal, Livewire has gathered the Secret Weapons and Bloodshot to her cause. Peter is the most obvious symbol for empowering the population against its oppressors. In fact, his power is literally to do just that — he awakens the Psiot powers dormant in otherwise regular people. This makes them both a target for the government and better able to fend them off. Kindt is careful to characterize these awakenings as voluntary.

It’s also worth noting that Peter’s first convert is a young boy named Tito in Juárez, Mexico. He telepathically gives Tito directions to the Renegade hideout in rural Ohio. So now this kid, who’s being pursued by agents of multiple governments to crossing borders in the hope of finding a better life. Kindt is aligning Renegades on the resistance side of the whole immigration debate in the United States.

And then there’s Amanda, aka Livewire. I think this issue struggles with her characterization the most. She is obviously acting to protect Psiot children, and has lost all good faith with G.A.T.E., the U.S. government, and Omen. But it’s sorta tough to side with her methods. She’s keeping the entirety of the North American power grid off-line until she can be assured that all Psiots are safe. That’s putting hundreds of thousands of lives in danger, and while that’s awful, Amanda points out that no steps short of this one have proven effective.

But maybe that’s me bringing both my politics and my affection for Livewire into the equation. Giorello draws Livewire as a classic villainess — sometimes with solid obsidian eyes, sometimes with a defiant sneer.

So, I don’t know. Maybe we’re supposed to see that there are bad guys (barf) on both sides. What do you think Michael? Does there appear to be a clear morality to you? Does recruiting a living-fucking-weapon (Bloodshot) sorta concede the high ground? Or is all fair in Harbinger War?

Michael: I think that the lines between “good guys and bad guys” are intentionally blurry for now. You are right to point out the establishment company men, but none of them are portrayed as completely hard-headed in their views. Aric, Ninjak and even Palmer are all given a sympathetic light by Matt Kindt.

Despite his hard-lined American bluster, Palmer is actually shown to have something of a heart. While Sergeant Greekanov is staking out the Renegades’ hideout, Palmer commands her to stand down. “We won’t have any more children’s deaths on my watch if I can help it.” In light of current real world leadership in this country, I can respect a dude who doesn’t want kids to die. What a concept!

Back to the aforementioned “American bluster.” It’s abundantly clear that Kindt and Tomás Giorello are putting Palmer on display as the symbol of the American military industrial complex. Giorello even portrays the man in the classic Uncle Sam “I want you” pose:

And while I praised him for his desire to prevent further children’s deaths, Palmer can still be a cold strategic son of a bitch. Unsure of his loyalty, Palmer twists Aric’s arm into servitude by pointing a metaphorical gun at his people the Visigoths. He’s basically saying “if we’re fucked, you’re fucked.”

Another thing that Harbinger Wars 2 has in common with Civil War is the “professional courtesy” the divided heroes give to one another. Whenever a fictional hero goes rogue and their own people are hunting them down, their non-rogue friends ALWAYS know where they are, and thus try to plead with them. Livewire is granted this courtesy twice: by Aric, then by Ninjak. If GATE really wanted to find these guys, they should just throw a tracker on their stooge heroes. 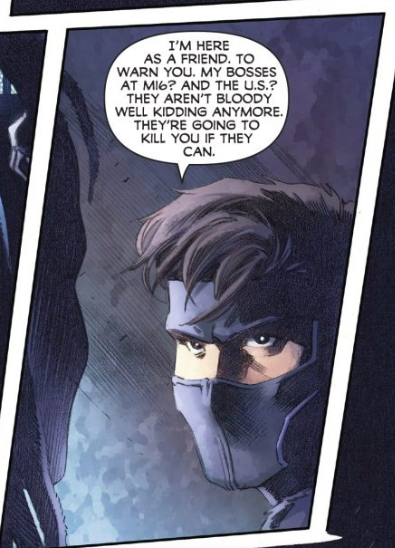 Patrick made an excellent call with that “femme fatale” pose that Giorello draws Livewire in. I hadn’t interpreted it that way initially, because it also is a typical sexy woman pose drawn from the male gaze.

Livewire may not be an out-and-out villain, but she is certainly the more unpredictable of the two sides in this war. But she kind of had to be, right? Palmer and his team have the full might of the world governments while Livewire and her Renegades are a rag-tag band of fugitive rebels. To pose a threat, Livewire needs to up the ante and make some more drastic decisions. And that includes having her own personal kill machine: Bloodshot.

Amanda essentially is speaking to/controlling the nanobots that Bloodshot is wired with, making him her very own personal Punisher. Bloodshot is Amanda’s obedient lapdog — until things go wrong. Because they will go wrong. Even if you believe you’re on the side of the angels, when you make a deal with the devil, things are bound to go to hell.