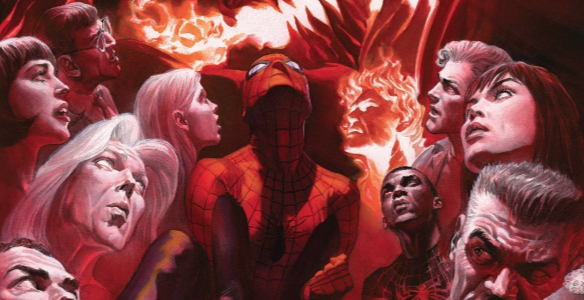 Spider-Man has one of the most iconic, expansive, and enduring supporting casts in all of superhero comics, and that’s a fact Dan Slott has used to his advantage throughout his long tenure on The Amazing Spider-Man. He especially leans on his supporting cast in issue 800, the penultimate issue of his run and the grand finale of “Go Down Swinging.” It’s an issue all about the power of the people in Peter Parker’s life, be it the power he gives them, or the power they give him.

The latter is made incredibly obvious in the issue’s climax as Peter finally pummels Norman Osborn, bringing his reign of terror to an end. 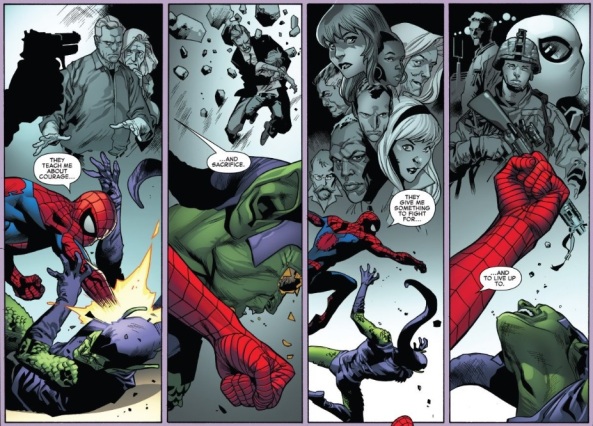 It’s a very shonen-esque sentiment, touting the power of friendship as a force stronger than any other. I eat that kind of thing up, but fortunately, Slott devotes almost every moment of this eighty-page behemoth to backing up that sentiment with action. Peter doesn’t just talk about how his friends give him power, but we see it in action. We see Mary Jane and Flash Thompson talk Peter down and give him smart, useful advice; Flash even sacrifices his life to save Peter and his friends and hurt Norman Osborn. Even Eddie Brock is willing to lend Peter his Venom symbiote so that he can fight with Norman on a level playing field.

That’s where Slott highlights the power Peter gives others in return. We see how the example of Spider-Man helped teach Aunt May to stand up for herself, helped transform Flash Thompson from a bully into a hero, how it softened Venom, even how the lingering effects of Peter’s memories are still influencing Doctor Octopus’ actions (for the better) long after he’s hung up his Superior Spider-Man mantle. Now Peter’s teaching J. Jonah Jameson as well, flinging himself in front of a bullet to stop Jameson from murdering someone and, later, helping walk him through the guilt he feels for his part in Osborn’s rampage. Peter makes the people around him better, and in turn they help make Peter better. It’s a wonderful infinite loop that truly gets to the heart of Spider-Man’s power and appeal.

While the image I posted above is a more abstract take on the power of friendship, elsewhere in the Spider vs. Goblin conflict Slott finds more concrete ways to incorporate this strength, largely by contrasting Peter’s supporting cast with Osborn’s ego and isolation. 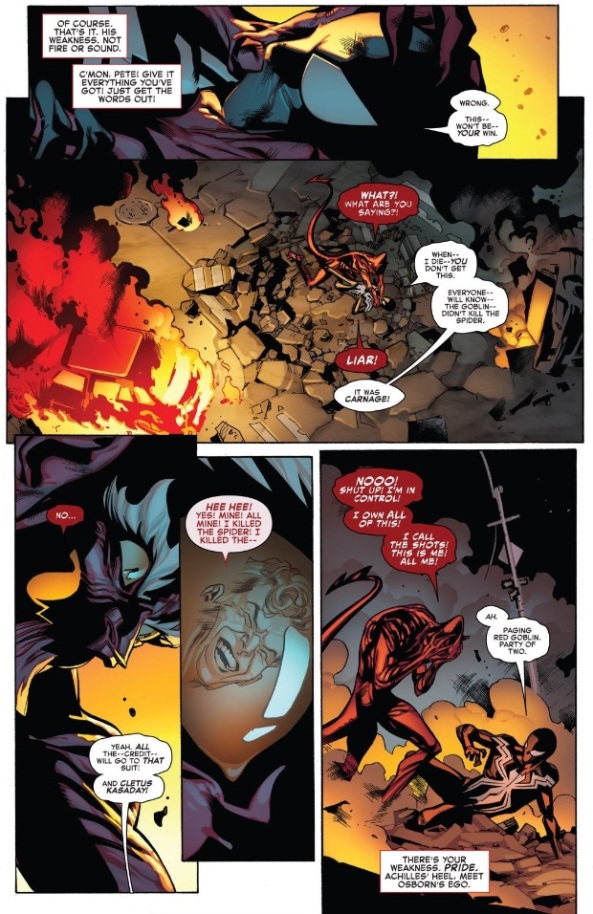 Osborn allows his ego, his desire to stand alone and win by his strength and his strength alone, to become his greatest weakness; he voluntarily throws away the Carnage symbiote just so that he can claim full credit for Peter’s defeat. Osborn represents the futility of trying to fight alone, while Peter shows the true strength to be found from working with others. It’s one of the best-supported arguments for the power of friendship that I’ve ever read.