In isolation, the words “make America great again” shouldn’t elicit a strong negative biological/emotional response. But this fairly innocuous phrase has been twisted beyond recognition by white nationalism, isolationism, and just general shitheadery. On Frank Turner’s newest record, Be More Kind, he attempts to overwrite the listener’s associations with those four little words on track five, boldly titled “Make America Great Again.” The song is big, joyful and rebellious at the same time, like all of Turner’s best tunes. I like it a lot, but I still flinch when chorus comes around. Some words and some symbols are just too thoroughly corrupted to be reformed. Brian Michael Bendis and Ivan Reis’ Man of Steel 1 has a similar hurdle to overcome: attempting to return Superman to the platonic ideal that maybe only exists in the imaginations of Kal El’s biggest fans. The results are miraculous.

I would never claim to be a big Superman fan, but I understand his appeal of the civil servant who genuinely cares about the good he’s doing on Earth. Last month’s Action Comics 1000 was jam-packed with stories about Superman’s impossible capacity for compassion and heroism, but all of those vignettes were necessarily isolated. Quick snapshots in Clark’s life instead of part of a larger narrative about the Last Son of Krypton. Bendis and Reis weave the story of Rogol Zaar, and his quest to destroy all Kryptonians, into the background of one of those feel-good Superman stories. Reis in particular doesn’t make any excuses for Rogol, casting him as an insatiably violent monster. Rogol is always either holding a weapon, lugging a fresh kill around on his shoulders, or attempting to smash a hologram of a Guardian with his fists.

What a dumb, violent, dummy.

That’s Superman’s enemy in this story. Contrast that with the dozen or so pages of Supes performing good deeds around Metropolis. The appeal of the character’s goodness is undeniable. Even as Clark is pulling people from burning buildings, he’s considering the systemic problems that could have led to fires breaking out in apartment buildings all over the city. He also does a little soft detective work: having just captured Firefly earlier that evening, he can help put together some of the pieces of this mini-mystery.

And that “help” is crucial here. Superman doesn’t actually get to the bottom of this suspected arson, but he does make a meaningful connection with the new Deputy Fire Chief Melody Moore (great comic book name, by the way). They share information and establish a nice little repartee, even playing with the social awkwardness inherent in Superman’s powers — in this case, his super hearing. 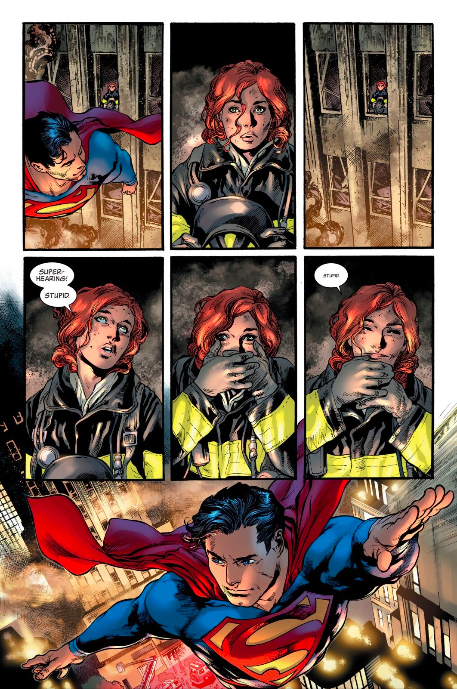 Reis’ acting has never been better. I’m so glad he took the time to play that whole reaction out in a six panel moment that must have lasted three seconds in the story. And I absolutely adore the semi-smile on Clark’s face as he flies away. It’s not a smirk, and it’s not a big cheesy grin, it is a sincere show of contentment. It’s a remarkably human Superman.