Taylor: Sometimes I’ll come home after work and my wife will ask me how my day was. Usually, I have something interesting to tell her, but occasionally there simply isn’t anything all that remarkable to say. In these cases, my response to her query is that is was “just a day.” See, the thing is, if you do anything enough times it’s bound to become rote every now and then. This same idea certainly holds true with monthly comics, with most series producing “just an issue” that isn’t all that remarkable. Such is the case with Marvel Two-In-One 6, which notable only for how generic it feels.

The pedestrian nature of this issue is somewhat surprising given its content. Ben Grimm and Johnny Storm fighting a Dr. Doom-possessed Galactus in an alternate dimension should be pretty damn entertaining. It’s not, though and there are several reasons why.

The first of these has to do with how the issue ends. After Defeating Doom-Galactus, Ben and Johnny immediately decide they must be on there way to another dimension to look for their own dimension’s Reed Richards and Sue Storm.

To echo Reed’s words, I don’t know why Ben and Johnny are here in this dimension. Sure, I understand that they’re here because Ben and Johnny are looking for their version of Reed of Sue (even though Ben knows they’re dead), but I don’t understand why they’re here from a narrative aspect. To recap, Ben and Johnny came to this dimension, pretty randomly, fought Doom-Galactus, and are now leaving. Having spent only a few issues in this world, I don’t care about the people living here at all. Had Doom-Galactus eaten this version of Earth I would feel no sorrow or remorse because I don’t feel anything for the people living here. Likewise, I don’t care that Johnny and Ben saved these people either. Their adventure here basically feels pointless. They came, they fought, now they’re leaving.

It’s not as if Chip Zdarsky doesn’t try to infuse some emotional heft into the issue. The problem is that it’s placed in the wrong place. The climax of this issue doesn’t center around Ben or Johnny, as one would naturally assume, but their version of Dr. Doom. This version of Doom is trying to be a good guy these days, so he’s helping Ben and Johnny defeat an alternate version of himself. Unsurprisingly, he has conflicting emotions about this.

Instead of letting the Fantastic Four defeat his alternate self, Doom wants to do the job himself. He ultimately relents to the Four’s pleas which actually does demonstrate a modicum of growth for his character. While that’s nice and all, the issue I have with it is that Doom isn’t the central figure of this series. That belongs to Ben and Johnny, so it should be them who are given climatic, emotional events, not Doom. Because of this circumstance, the issue doesn’t engender any strong feelings towards any of the characters. Ben and Johnny aren’t given any emotional screen time and Doom is an ancillary character whose progression isn’t nearly as interesting as other characters.

It’s these missteps which make the issue seem average and unremarkable, a trait of this issue which is also present in its artwork. Jim Cheung and Walden Wong man the pencil and ink respectively and while their work is satisfactory it doesn’t do anything to lift up a dull plot. The biggest reason for this is that their artwork is too busy and/or confusing in much of the issue. 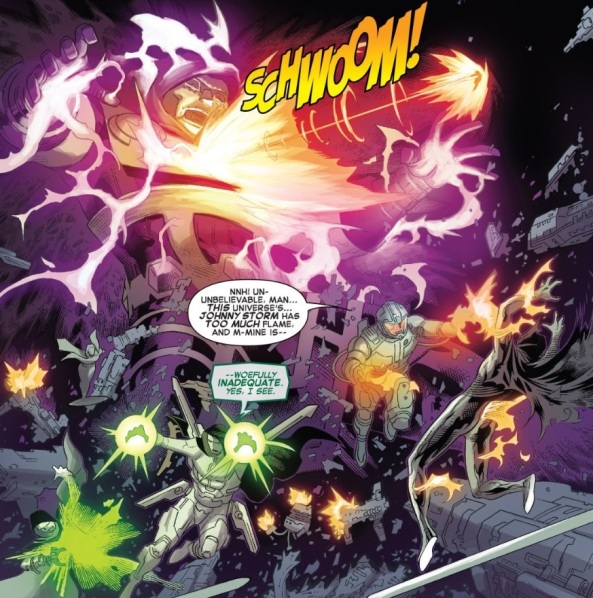 There’s a lot happening on this page, really, too much. There are two Johnny Storms on this page (one fighting Doom-Galactus and another fighting Doom Bots), there are two Dooms, and there are a mess of spaceships. While Cheung may be trying to capture the chaos of battle here, the result isn’t panic-inducing so much as it is frustrating. It’s like watching a Michael Bay movie, trying to make sense of a action scene full of explosions, fast cuts, and twisting camera angles. It’s all just too much happening at once. Had the artwork been simpler during the battle scenes, as it is at the beginning and end of the issue, it maybe could have made this issue a little more exciting.

I know that’s a lot of harping on this issue and I want to make it clear I don’t think this issue is bad. Rather it’s just an issue I’m having a hard time caring about for better or for worse. Drew, does this issue tip the scales in either direction for you? Is there any emotional investment worth making? Or is this “just another issue?”

Drew: I have to admit, I’d been sleeping on this series, so this was my first issue of Marvel Two-In-One. There’s always some confusion built into jumping into a series midstream, but the multiversal nature of this series made things particularly confusing. As you pointed out, there are two Dooms and two Johnnys in this issue, not to mention parsing which dimension each character came from. By the end of the issue, I had it figured out (Ben, Small Doom, Spacesuit Johnny, and Rachna are from the prime universe, but this issue is set in a universe where Ben is dead, Doom and Galactus switched bodies, and Silver Surfer gave his power cosmic to Johnny Storm), but I think that effort forced me to slow down and get invested in these events in a way that you weren’t, Taylor.

Right from page one, this issue is playing with some interesting ideas: 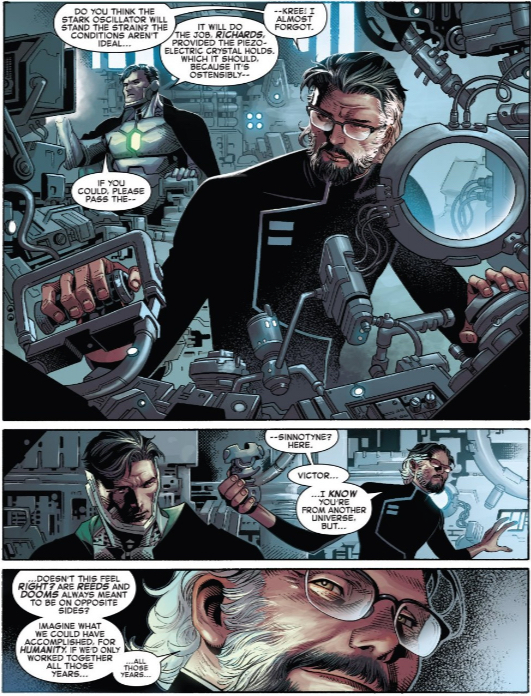 Reed and Doom teaming up? Finishing each other’s sentences? As Reed notes, it feels right. Add to that the fact that I didn’t know what dimensions these characters were from (or when this scene might be happening), and it takes on a kind of timelessness — this should be how these two have always interacted.

Believe me, I get how fights with Galactus tend to hit the point of diminishing returns pretty quickly — it’s hard to really wrap your head around the threat of the world being eaten, because 1) that’s far too big to really comprehend, and 2) the rules of monthly comics in a shared universe necessarily dictate that the world not be destroyed (though I suppose the alternate universe-ness of this issue nullify that a bit). Even so, seeing a Galactus-sized Ben Grimm land some Galactus-sized quips was pretty thrilling:

I kinda feel like that panel justifies the cost of admission alone, but then again, I’m a sucker for the Thing.

I definitely agree that there’s more emotional payoff in this issue for Doom than there is for Ben or Johnny, but I don’t see this as a weakness, necessarily. Some of my favorite episodes of television have centered around members of the extended cast or even guest stars reaching some profound conclusion that only tangentially impacts the series’ leads (I’m only coming up with Simpsons episodes off the top of my head, but I’d love to invite people to name some examples in the comments). Or, more precisely, that the effects on the leads are only a small piece of their grand journey. The case of the week is the most important part of any guest stars’ characters’ lives, but the regular crew of Law & Order get these much longer arcs that are only ever advanced incrementally in an individual episode.

Which I suppose brings me back to that question of why Ben and Johnny are in this dimension in the first place. Ben knows they aren’t going to find Reed and Sue, but is maintaining the lie. Is it for Johnny’s benefit, or his own? Does he just need something to do with his friend, or is he trying to maintain the fantasy that Reed and Sue are out there for himself? As a total newcomer to the series, I can’t comment on how that arc has been developed prior to this moment, but it’s intriguing enough for me to stick around. Though again, I’m a sucker for the Thing.