By Patrick Ehlers and Taylor Anderson

Patrick: If there’s one part of the Star Wars formula I’ve had the hardest time connecting to on a personal level, it’d have to be the huge battles between spaceships.  Don’t get me wrong: I think the ships look cool, and the Millennium Falcon is so near and dear to my heart that I almost cried during its reveal in The Force Awakens. But there’s something about two factions of cold, gray, lifeless ships zipping through space and shooting blasters at each other that feels remarkably impersonal. With Star Wars 49, writer Kieron Gillen and artist Salvador Larroca set out to stage the mother of all space battles at the birth of the Rebel Armada. By linking the ships to the characters, the creators create a sense of emotional continuity that makes this one of the best space ship battles I’ve ever seen.

But before I really dig into this issue’s successes with spacecraft, I want to spend a second explaining what the problem is. All vehicular combat is tough to dramatize, especially in comic book form. On the screen, sometimes it’s enough to raise the audiences’ adrenaline by smashing two cars into each other at high speeds. Even in that, audiences are too well acquainted with the physics of cars to be fooled or compelled by anything artificial. That’s why the Fast and Furious movies are so popular — they rely on killer stunt work and practical effects, actually slamming one car into another. The second they CG a car, the illusion is broken. The physics are off, the light plays off the paint job wrong, window-transparency is just a shade outside of real. When realism is the source of your emotional cachet, any artificiality breaks the drama.

So what’s a Star Wars comic to do then? There are so many layers of artifice between the world the story takes place in and the reader. Larroca starts this issue by laying the challenges out in front of us.

There are something like 20 ships drawn in Larroca’s excruciating, tracerly detail, with dozens more dotting the starscape behind them. Besides the Falcon, they are largely faceless ships. You can determine what side they’re on by their geometry — the good guys are round and bulbous, the bad guys are sharp and angular — but at this point, they’re all just pieces on a board. Even the way they hang in space, with no reference points to establish speed or position, presents a storytelling challenge.

Larroca, like many Star Wars directors before him, rapidly cuts between ships’ interiors and exteriors. But Larroca finds a bunch of other ways to link his cast to their weaponized vehicles. Because this is a comic book, the reader is able to see an entire page at once, meaning that instead of feeling like a series of rapid cuts, we are witnessing what’s happening inside and outside of the ships simultaneously. Let’s look at how effective this when Leia blows up a TIE fighter with the Millennium Falcon’s dorsal gun turrets. 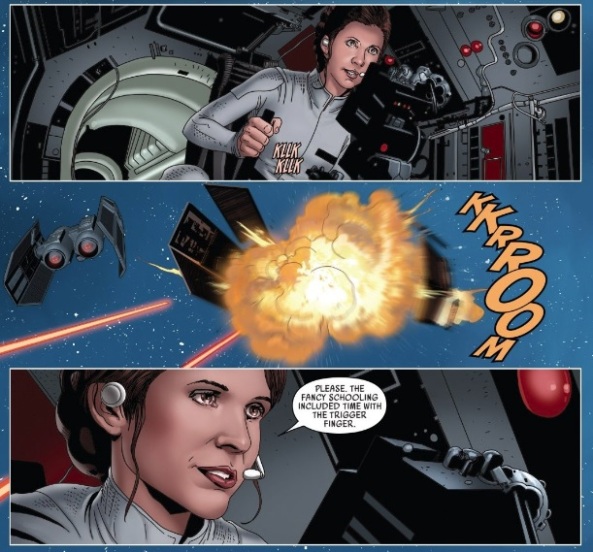 We’re able to see Leia take aim, the TIE fighter explode, and Leia react to the kill all at once. Having all the information simultaneously means there’s no disconnect between the person piloting the craft and the craft itself. It’s a simple shot-reverse-shot in film, and while the effect is similar, we lose the obvious connection between the character’s actions and the ship’s actions.

So, the medium is doing some of the work for our creators. Gillen and Larroca goose the connection between the characters and their ships by depicting them both freely floating in space. Sometimes this is literally true: Urtya’s fishy-droid assistant floats around Urtya’s watery chambers. And sometimes, it’s Larroca having fun with the space on the page, like the Admiral Ackbar introduction, where it seems like Arkbar himself is sitting alongside his unstoppable space fleet. 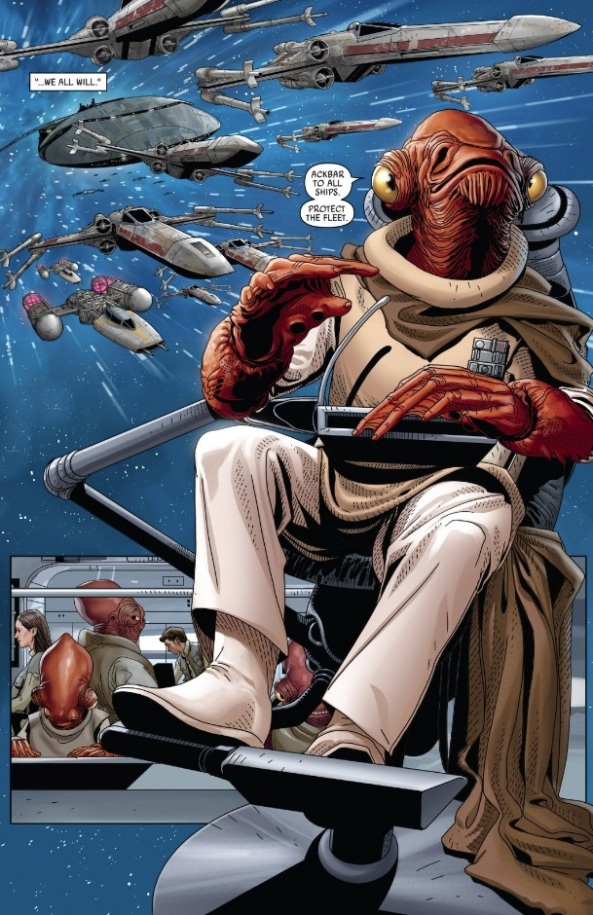 All of which essentially obliterates the boundary between the ships waging war in the inky blackness and our heroes.

Taylor, I loved this issue, but I’m eager to see your take on it. My analysis is pretty front-loaded, so I’d love to know your takes on the pair of exciting ending sequences. 1) What’s up with modern Star Wars and weaponizing ships? They did it in Rogue One and in The Last Jedi and they do it here. And 2) were you expecting Trios to turn on our heroes? I like that character so much, that it hurts my heart a little to see her rat Leia out to Darth Vader. But, hey, that ruthlessness is also something I love about her, so… it’s a “damned if you do, damned if you don’t” situation, I guess.

Taylor: I suppose there’s something easily heroic about a sacrificing your ship and yourself for a cause, and in terms of going out with a bang few things are quite as dramatic as crashing one spaceship into another. The Rebellion (and subsequently the Resistance) have always been comprised of people willing to do whatever it takes to destroy the evil powers that threaten the universe. Obi-Wan did it, Han did it, Biggs and a thousand other X-Wing pilots did it, and most controversially, Admiral Holdo did it. The point is, people often equate sacrifice with caring about your cause and when that’s the case, why not show you loyalty in the most flashy way possible?

But the issue I have with all this sacrifice is that it makes the Rebels look like extremists. Granted, there is a difference between what the Rebels are doing here and elsewhere in the series and what terrorists do. The Rebels who are sacrificing their lives are doing so to protect the lives of their comrades whereas terrorists sacrifice themselves solely to cause harm to others. However, both the Rebels and extremists lay down their lives so that their cause will live on. In this way, the Rebel practice of crashing into Imperial ships makes them seem less heroic, and more crazed. Compound this with the fact that the rebels ostensibly need these ships to win the war and it seems ludicrous that anybody is crashing a ship into another when they’re such a precious commodity.

I think this idea of doing whatever it takes to survive is something that Trios understands. If anything else, the Queen has shown that she is a survivor, which means she may be loyal to no one but herself. If this is the case, it makes sense for her to be colluding with Vader to end the Rebellion. We all know what Vader is capable of doing to those who cross him, as does Trios. Can we really blame her for fearing the wrath of the Lord of the Sith? If it’s any consolation, it seems like she would rather be teaming up with Leia than Vader, anyway. After Leia leaves Trios to herself she contacts Vader using a super secret, secure channel that has a cryptic password.

“There was no other choice.” Depending on what your view of Trios, this could mean one of many things. For my money though, it suggests that Trios is being forced to work with Vader to secure her own survival. What’s interesting about this is that Trios is doing exactly the opposite of Rebellion members. Instead of sacrificing herself for a cause she’s choosing her own survival. It’s easy to say that’s the coward’s way out, but if I was faced with the prospect of being hunted down by Vader or working with him, I might choose the latter, too.

This idea of sacrifice is embedded into the idea of war, which is especially true when you’re fighting in outer space, which is actively trying to kill you at all times. I think you’re right, Patrick, in pointing out that making space battles exciting is harder on the page than it is on the screen. One of the reasons this is true is that creators aren’t afforded the use of sound effects when creating a comic. This is especially true with a franchise like Star Wars where the sounds are so recognizable that even dogs emulate them. This being so, the space battle here just isn’t the same when you can’t hear the familiar hum and swoop of X-Wing fighters in the panel below.

That’s not the fault of Larroca or Gillen though, it just happens to be a limitation of the medium. But signing on to create a Star Wars product means you run the risk of not getting things exactly right, such as this space battle. Growing up, I connected to the space battles mightily, unlike you Patrick. Having played the TIE Fighter and X-Wing on my PC as a kid, I got to experience first hand (sort of) the thrills of flying through space and blowing shit up. That means I know the sounds and looks of these famous ships by heart, and when that’s the case, anything less that the original thing is hard to to accept.