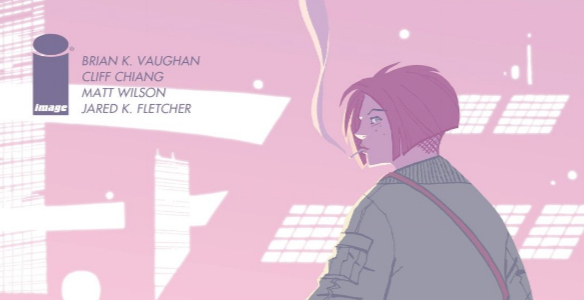 Ryan M: One of the best things about living in 2018 is the decentralization of knowledge. With the internet, you are a few queries away from knowing just about anything. There are, of course, the downsides, like I now have the power to use WedMD to diagnose myself with chronic illnesses or see evidence of the good time my friends were having last night while I watched 100% Hotter and diagnosed myself with chronic illnesses. Despite those minor dangers, though, there is so much to appreciate about how much we can know in moments. The titular Paper Girls come from a world where news and information travels manually, literally carried to your door in a finite form. Throughout the series, they have been at an information disadvantage, constantly trying to play catch up to understand what’s happening. For the first time, in Paper Girls 21, the advancements of the future may be a savior.

The issue begins with the image of a Rad worm busting out of an apple to encourage kids to read. Chiang captures the look of the 80’s library poster so well, I had to do a google to see if that was a real poster. It’s a testament to how tightly this book is written that this image both perfectly sets the time and place of the scene and acts as a harbinger of the tree of knowledge that we will encounter in the final pages.

The interaction that follows between Mac and the librarian is a delight. Mac’s worry about reading a book outside her age group is sweet and marks her feeling different from her Baby-Sitters Club-loving peers. 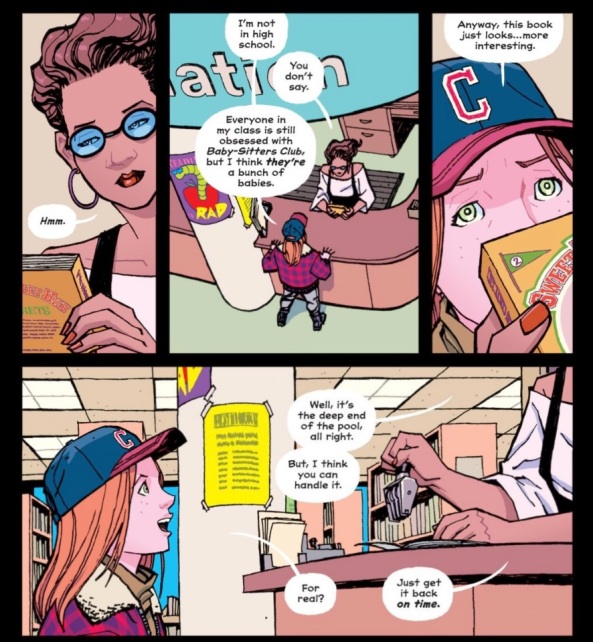 As a Sweet Valley girl myself, I totally get it. By the way, while the Reading is Rad poster may not be authentic, the cover of Secrets is exactly on point, down the to the warning about Jessica’s selfishness.

We have so rarely seen Mac with age-appropriate worries. With Mac’s innocence, Vaughan and Chiang give this scene a wistfulness makes the turn in the dream all the more upsetting as we are reminded of Mac’s cancer and she becomes the older, more bitter Mac that we know. Even after she wakes up, this issue still belongs to Mac. She drives the plot, acting as deciding vote to head into the city, and she’s the first to recognize it as downtown Cleveland.

The theme of mortality is reiterated throughout the issue, from Grandfather describing himself as “just trying to make it to tomorrow” in his old age to Double-O Tiff’s ennui over Timbuk3. 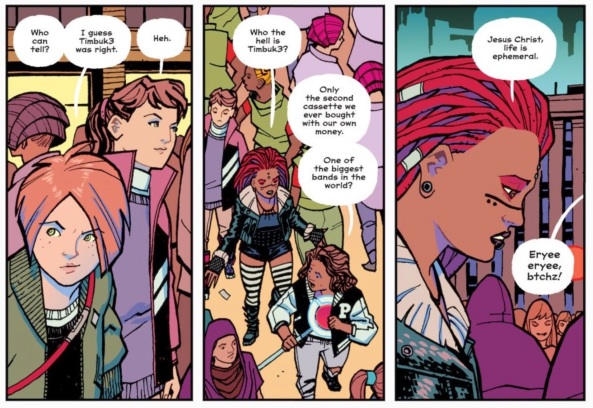 Like all of the pop culture references in the series, Vaughan makes sure that it works on a surface level, but offers second and third meanings to readers with context. The contrast between Tiff’s reality and the memory of her future self is effective even if you don’t know that Mac is referencing the band’s single hit “Future’s So Bright, I Gotta Wear Shades.” That song is a catchy tune with a subtext about Nuclear holocaust. The future of Cleveland may be literally bright, but that only makes it easier for the police to find and eliminate anyone breaking a law on the street.

The girls find refuge in the library. Again, Mac is the one driving the plot; she remembers the power of the librarian and knows that they’re someone she can trust. What they discover is the Tree of Knowledge in the librarian’s stead. Like the best plot turns, Mac’s moment of illumination is at once surprising and inevitable. As she grips the apple, knowing that there may be hope for her, the reader is put in the same position.

Through the sequence of scenes with Mac as instigator, Vaughan is able to make her the protagonist of the issue and get the reader completely in her mind in that final sequence. We know why she is so trusting of a librarian, how scared she is of her own death, and that she believes, at least in her dreams, that she may be able to fight it. Erin’s cautious attitude is reasonable. They don’t know what this tree-thing is, and it’s weird that it can identify Mac from her holding the apple, but the reader has been primed to ignore all that if it means a chance for Mac to save herself.

Spencer, what did you think of the issue? Were Vaughan and Chiang able to get you fully invested in Mac’s quest? Also, we got to spend some time on the streets of 2171 Cleveland, what did you make of the implications of the militant police force?

Spencer: Maybe this is a glib answer, but is a militant, shoot-first-and-ask-questions-later police force really any different from the police force most areas have now?

Let’s talk about 2171 Cleveland for a bit, though. Chiang, Vaughan, and colorist Matthew Wilson imbue the setting with quite a bit of personality in very little space. We can see that many of the city’s 1988-era structures still stand, but they’ve been surrounded and dwarfed by more futuristic/modern buildings full of color and life. This would imply to me that the Cleveland of 2171 is a city that values history and innovation in equal measure.

This panel, meanwhile, paints an entire novel about its setting. It seems like a rather nice place to live — Wilson fills the square with vibrant colors, the crowd is full of diverse, cheerful people, and they’ve even managed to grow palm trees in a flyover state!

The Judge Dredd-esque police force are the most obvious sign that this lighthearted take on the city is just an illusion, but the signs were there from the beginning. Take a hard look at the panel above — notice anything interesting? All the people in the crowd are women, a trend that continues the entire time our Paper Girls are out in the open. The homeless people taking refuge in the library are another sign that something sick lurks beneath Cleveland’s bright veneer, but again, look closer — they’re all men. There’s something very strange — even by Paper Girls standards — going on in Cleveland.

To answer your other question, Ryan: yes, I’m quite invested in Mac’s storyline. I’m a sucker for her character type — the one who’s actually quite sensitive but covers it up with bluster and bravado — and I don’t want to see her (or any of the cast!) die, so it’s heartening to see her look for a way out instead of just accepting her leukemia. I’d almost certainly do the same in her situation.

And while the creative team makes sure that there’s an ominous air surrounding Mac’s quest for answers, I don’t think it’s information itself Vaughan is calling dangerous — it’s the people who hold it, and what one must to do get it, that he seems leery of. It’s been a running theme throughout all of Paper Girls — while the protagonists are practically clueless, those who have answers can rarely be trusted (be they the Old Timers, Erin’s doppleganger, or the cartoonist from the previous arc). Why would the Tree of Knowledge be any different? 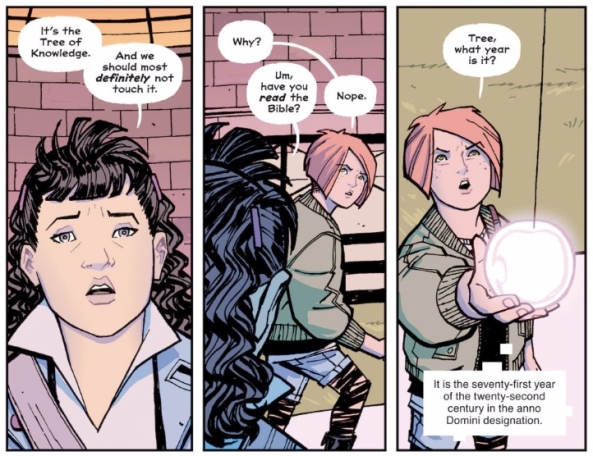 Just the name alone evokes a primal terror for many, even if Mac herself isn’t all that familiar with the book of Genesis. It’s also a loaded bit of symbolism for Paper Girls, reaching all the way back to Erin’s nightmare in the very first pages of the very first issue. In that dream we never see the actual Tree of Knowledge; instead, it’s represented by an apple. Not only does the tree’s “fruit” Mac holds in the final panel above look an awful lot like an apple, but much of the technology the Old Timers and other future characters have used have also been Apple products. Time travel issues aside (and I can’t even begin to understand this series’ time travel rules), I don’t think there’s anything wrong with Mac’s questions, but the people/things she’s asking are almost certainly quite dangerous.

The Tree of Knowledge reference draws attention to another interesting parallel between this issue and the first; both start off with dream sequences/nightmares. Unlike Erin’s, Mac’s this month also serves as a flashback. I’m not sure what, exactly, the fact that Vaughan almost never uses actual flashbacks in Paper Girls (instead inserting them into dreams and nightmares) means, but it adds an interesting wrinkle to them; they’re no longer partial.

Now I don’t think Mac’s flashback/dream is a Rashomon inspired lesson in perspective or anything, but it does seem important to remember that we’re seeing Mac’s memory of the past, not an impartial, objective telling of it. As far as I’m concerned, it actually makes the scene sweeter — not only does Mac fondly remember this pleasant interaction with a librarian, but she remembers how awkward and innocent she was instead of trying to bury or edit it out, instead of trying to make herself look cooler like she would if she told this story to her friends.

What’s most important about this sequence, though, is what it says about Mac as a character. There’s a pretty big contrast between the Mac we see at the beginning of the issue and the one we’re familiar with in the “present,” and the creative team plays that contrast for all its worth when the dream suddenly plunges into nightmare.

Not only is there a drastic change in color (and design; kudos to Chiang for turning that Poochie-esque worm into something so grotesque), but Mac is suddenly no longer a child, returning to her current age the moment her leukemia is mentioned; the sobering fact quite literally forces her to grow up. The Mac who was sweetly excited about a book only a few years prior is suddenly completely cynical about the idea of escapism — what happened to harden her so much, so quickly?

Cynical though it may be, her answer in that final panel is also quite life affirming. Again, I mean that literally — instead of resigning herself to her death or trying to distract herself from the news, she’s confronting her sickness (or at least the symbols her subconscious chose to represent it) head-on. I suppose we always knew Mac was a fighter, but I get the feeling that Mac needed the reminder — she’ll no doubt need to fight harder than ever, not just to save her life, but to face whatever consequences her quest for knowledge might bring.