“When I woke up, I went on what the movie advertisements refer to as a roaring rampage of revenge. I roared. I rampaged. And I got bloody satisfaction.”

I tend to struggle with revenge fantasies. The objective of the protagonist is too prescribed for me, as though the sentiment “I want the people who made me suffer to feel what I feel” is a universal impulse. That is, of course, part of the genius of Kill Bill: the revenge fantasy is challenged the second Beatrix Kiddo sees the life she’s sworn to ruin. It’s a twist on the formula, just like Nick Spencer and Steve Lieber’s The Fix 12. The motivation remains the same, but our hero’s efficacy is the variable. Roy’s complete inability to get revenge for Mac’s death makes this issue a borderline genre spoof, and it’s just so perfect.

Of course, the spoof only works because Spencer and Lieber tackle the set-up with a deadpan severity. I mean, they toss in a panel of Pretzels mourning Mac.

Jesus. And the copy on this panel is “all you want to do is cry”? Come on, fellas, we’re writing about a parody here! Actually, Pretzels ends up being a pretty good pivot point for when this issue goes from mournful to genuinely hilarious. This is our first Pretzels cue, and he’s sad. The issue then gives us two scenes illustrating both the brutality of Josh’s crime empire, and the inevitability of his invincibility. That second scene in particular is full of Fixian jokes, highlighting the mundanity of running a criminal empire. But it all feeds into the horrifying reality that Josh is untouchable — while our heroes sift through the rubble of a bombed-out LAX parking garage, Josh spends a day at a high end spa.

Cue Pretzels, and a shift in tone. Next time we see the dog, Roy’s got him locked in the car with the windows rolled up (but KPCC on the radio). Check out how the perspective on these two Pretzels jokes have flipped. In that first panel I posted, the joke is that we care about Pretzel’s feeling too much —we “awwww” at a drawing of a sad dog, and then sort of chuckle at ourselves for having that reaction. This locked-in-the-car joke is the exact opposite: now it’s funny to not care about the dog.

And that kicks off Mac’s roaring rampage of revenge. He’s so so so so bad at both roaring and rampaging, and Lieber milks that incompetence for all its worth. I love seeing Roy literally sneak through the bushes at Josh’s house, only to find that he’s renting the place out to a nice couple who can’t find the towels. But my favorite bit of parody is Lieber’s riff on the shaking-down-associates montage. 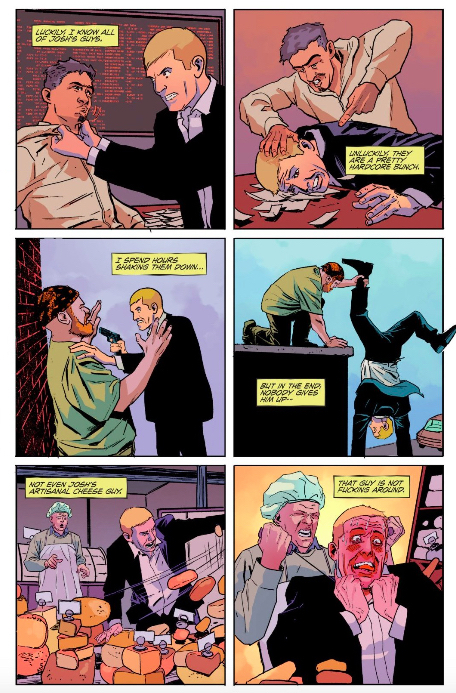 This is Lieber at a lightning pace: three clean set-ups, three awesome punchlines.

And the issue closes with the ultimate punchline, of course. Mac is alive. Roy suffered and failed and didn’t even have a fallen comrade to avenge.