by Drew Baumgartner and Ryan Mogge 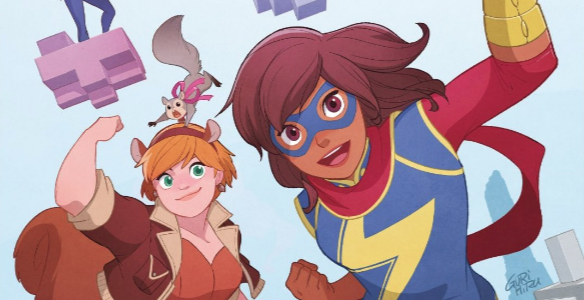 Drew: For most of my mid-20s, I worked for an academic summer program — basically, summer camp for nerds. As with most work with youth, the job was both rewarding and frustrating, with unexpected problems often interrupting the flow of what we might imagine a “normal” day to be. Indeed, those unexpected problems came up so regularly, that my boss’s regular refrain was “don’t let the urgent crowd out the important” — that is, don’t forget the part of the job that isn’t putting out fires. It’s straightforward advice, insisting that every part of the job is important, but I think it’s particularly salient when dealing with kids — you don’t want the loudest, most poorly-behaved students to command all of the attention, as the quiet, well-behaved students might be struggling just as much. It’s a hard balance to strike, especially for the college-aged students we hired as instructors, so I understand exactly why Doreen Green makes the missteps she does in Marvel Rising: Alpha 1.

That may be oversimplifying things a bit too much — the students are making plenty of poor decisions, too — but it’s hard to deny that Doreen’s struggling to make her students feel properly seen. She walks into the computer lab to see three boys intimidating Ember Quade, and this is her reaction:

I think Doreen’s instinct to check in with Ember about this is great (and true to her character), but diminishing the exchange by calling it an issue of “gamemanship” and letting the perpetrators walk away without any consequences (heck, without so much as acknowledging what she said) doesn’t exactly put her on Ember’s side. Ember is a kid who already feels ignored and unimportant, and the fact that picking on her doesn’t warrant any repercussions in her teacher’s mind only reinforces those feelings.

The point here isn’t to vilify Doreen, or suggest that writer Devin Grayson has somehow botched this scene. Doreen is a teacher with no real experience — this is all very believable. Instead, my goal is to illustrate how this plays out in Ember’s mind and highlight how effectively Grayson makes that distinction. In fact, Doreen does follow up with those boys, but secretly, as Squirrel Girl. She has every intention of making people face up to whatever wrongdoing they may have committed, but maybe not in the open, demonstrative way Ember might need to feel like somebody has her back.

Ember’s feelings are exacerbated when Squirrel Girl and Ms. Marvel intercede on her inhuman-powered attempt at revenge. They’re just trying to prevent innocent people from getting hurt (and are essentially unaware of her grievances, let alone that Danger Kong is meant to address those grievances), but Ember sees this as them aligning against her. In her mind, justice would have been served if these superheroes had joined her monster in beating up those three dudes, so the fact that they did the opposite is further confirmation that the world is indifferent and unjust. 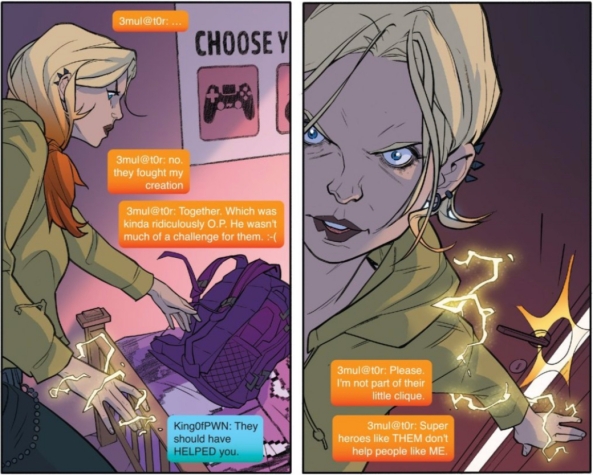 It’s a leap in logic, to be sure, but the kind that teenagers make on a daily basis. She never made her involvement in these events clear to anyone, yet still takes it personally when nobody takes her side. It’s exactly the kind of behavior that frustrated me so often at that camp, but is 100% true to life (you know, with some superpowers thrown in).

Which is to say: I absolutely love the characterization in this issue. Doreen’s choices tell us a great deal about her, as do Ember’s. I haven’t mentioned Kamala yet, but only because I don’t think this issue really gives her much room to be herself. But with the character work so strong elsewhere, I’m confident Grayson can flesh her out in future issues. I also haven’t mentioned Georges Duarte’s art, which is a bit more criminal. Duarte’s choices make even the more talking-head-y classroom sequences dynamic, but I have to say, my favorite moment is when Squirrel Girl leaps over the recycling bin DK throws at her:

I’m a big fan of both Ms. Marvel and The Unbeatable Squirrel Girl, but I’ve mostly only ever encountered those characters under the pens of those two respective creative teams. I was nervous I wouldn’t enjoy them as much here, but I think Grayson and Duarte do a great job setting up a conflict that demands their empathetic approaches to crime-fighting. This is a series to watch.