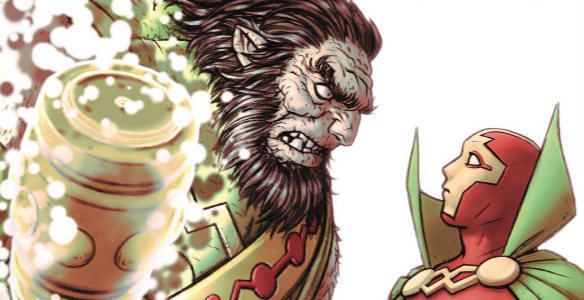 War is hell. It is economically, physically, and psychologically catastrophic for both those waging war and anyone unfortunate enough to be in war’s orbit. But ending a war? Ending a war requires one of two things: one side to be completely destroyed, or an agreement to be reached between the warring parties. Most wars end the second way. Which is borderline unfathomable, right? Imagine sitting down to negotiate with someone who has been systematically, enthusiastically, killing your friends and family every day for months or years. Tom King and Mitch Gerads’ Mister Miracle 9 wrestles with the dissonance of trying to make peace out of war.

Mind you, this sort of dissonance is normal for an issue of Mister Miracle, with one big asterisk. Normally, King and Gerads juxtapose the love in Scott Free’s life with the ultra violent realities of being both a superhero and a son of Apokolips. It’s the kind of superhero deconstruction we all respond to — plugging day-to-day human experiences into high-flying heroics. But where issue 9 sets itself apart is that the humanity and the elevated heroism come from the same stimulant: war.

Gerads and King start the issue by playing this for laughs. The first page zooms in on Apokolips one panel at a time, each revealing a different angle on the atrocity that is the war between Kalibak and Mister Miracle. The page is 80% horror, and is punctuated by Scott asking if there’s a bathroom “or something.” A place to piss is about the crudest, most mundane thing a person can ask for in the middle of burning hell-world at war. Even the table they’re negotiating at contains both the promise of peace — check out both armies’ sigils on the banners in the background–and the evidence of violence and oppression. Those are people in chains, likely prisoners of war, holding up the negotiating table.

Peace, it would appear, is built on suffering and indignity. Or at least, that’s where the issue starts.

Mister Miracle assumes that there is a way to negotiate in good faith with Kalibak. That’s an assumption that Scott needs — this war has rattled him to the point that he buries his head in a pillow and obsesses over his chattering teeth. He believes in the power of diplomacy because he has to. But Kalibak, and ultimately Darkseid, are not good-faith actors. Their goal is not peace, but further suffering. Scott and Barda approach a dishonest practice with vulnerability and end up paying the price for their naiveté. Kalibak’s offering of the Mirror of the Godess underlines this, as both Scott and Barda peer into it, revealing the most fragile versions of themselves.

This is an important moment for Scott and Barda — that’s why Gerads luxuriates in it for a full page. Vulnerability is a high-minded goal, necessary for true intimacy, which these characters have. It also makes them, well, vulnerable to their enemy. It is absolutely crushing when Kalibak names his price for peace, and I can’t help for feeling foolish for hoping it would be anything short of exactly the thing we don’t want to lose.