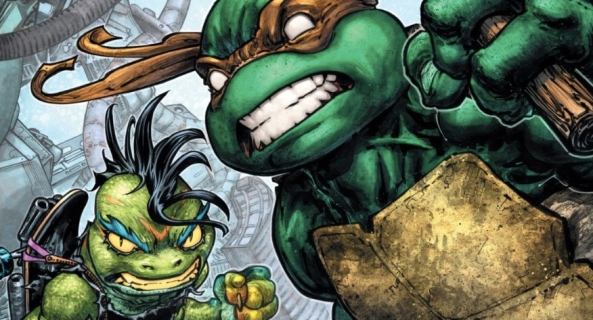 I think we all need a little mental health check in. How are you doing? At the time I sit down to analyze Teenage Mutant Ninja Turtles Universe 23, the only news I can catch on my social media feeds are the infuriating reports of migrant children separated from their technically-criminal parents. This is an unspeakably cruel policy, enacted by opportunistic monsters, and enforced by a criminally unrestrained agency. It makes me mad to the point of being physically sick. And powerless. Ryan Ferrier and Pablo Tunica’s “…And Out Came the Reptiles” story from TMNTU 23 perfectly captures this sickening feeling of desperation, inflicting the ugliness of Mondo Gecko’s impotent rage on the whole issue.

Tunica leans into ugly early, rendering Mondo with an almost John Kricfalusi elasticity. Tunica and Ferrier seem to be totally in sync with the characterization of Mondo, who seems like he’s too self-involved to actually be sympathetic to the poor, dying Seymour. I mean, by all accounts, Mondo’s not even listening to him. Mondo blows through a list of things that he know would cheer himself up, and the sheer ugliness of this makes Seymour barf in his tube. 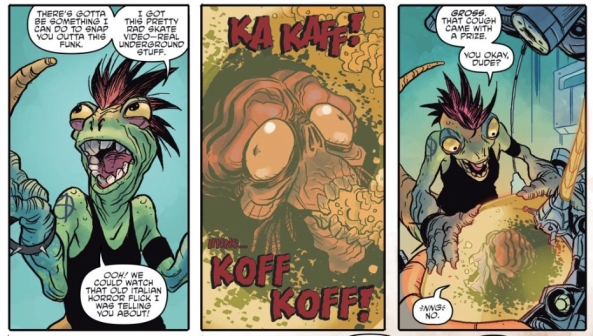 This is how Mondo is processing emotions. Michelangelo will point this out later in the issue, but shit gets dark. Seconds before slipping into a drug induced comma, Seymour screams that all he wants is to be allowed to die. Tunica comes in CLOSE on Seymour’s withered face, so we can really see the dire state of the life Mondo is trying to save. When Mondo goes to ask Hob for help stealing the equipment that could save Seymour’s life, Hob looks huge. Tunica draws Hob with an enormous neck, a huge barrel chest, and muscles and veins that practically leap from his face and body. That accomplishes a couple things: it makes Hob seem supernaturally powerful, and it keeps bringing up these subtle cues of body horror. It’s not until Michelangelo arrives on the scene that Mondo can center himself at all. Fittingly, we’re introduced to Mikey mid-meditation. 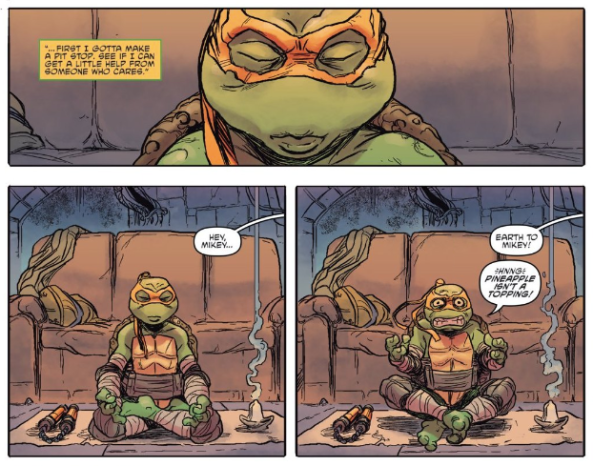 Throughout the issue, Tunica keeps Mikey’s proportions relatively static, even as Mondo’s elasticity reachness new levels of craziness. I have long said that the strength of the IDW Michelangelo is that he has genuine emotional intelligence, and this issue reinforces that concept.