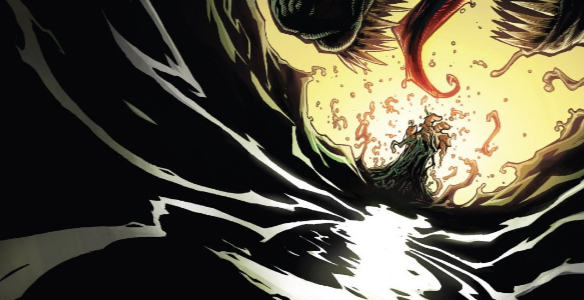 If you have never been addicted, you can have no clear idea what it means to need junk with the addict’s special need. You don’t decide to be an addict. One morning you wake up sick and you’re an addict.

Is it possible to explain addiction to someone who has never been addicted? The closest parallel I can draw is the deep, resounding heartache felt when ending a long-term relationship, when the hurt is so big that it is all-encompassing, physically affecting you, turning your stomach, switching your brain off from rationality. Maybe that’s close, but there’s plenty less stigma associated with heartbreak than addiction and its corresponding mental health cycles. Different forms of media endeavor to bring addiction out of the shadows and prove that it is no indication of a flaw in a person’s character, but even a well-told story like that of Requiem for a Dream might offer the non-addict a catharsis based upon their security in never living that experience as opposed to an understanding of those who have. Venom 2 offers a compelling look at a character in a narrative rife with addiction imagery and symbolism which might just lend a window into the life of someone struggling with their relationship to a substance.

The issue opens with our protagonist, Eddie Brock, unconscious after being attacked and impaled through the heart by an infected symbiote. Brock suffers from a literal hole inside of him — a hole caused by a symbiote (symbiotes being his substance of abuse) and also a hole which, on many levels, only his symbiote can fill:

The metaphor’s clear here. One can try to fill a recess or iniquity in themselves with a substance, but it just makes the abcess deeper, until it feels like the very thing which deepened that hole is the only thing which can fill it. But as Rex mentions, this is merely a temporary solution, and Brock may be running out of second chances.

Rex Strickland, himself, fills a very interesting role in this addiction allegory. The Vietnam vet and mission coordinator for the doomed operation which damn-near killed Brock, and left Brock in mortal peril, nearly pays with his life for what Eddie initially believes is a betrayal. While Brock is able to placate himself despite the infection nearly driving him to murder, I can’t blame Eddie for his anger. Rex, as someone who survived his government-sponsored bonding with a symbiote and has since, apparently, kicked his own habit, now acts as something akin to an AA sponsor, but one asking his sponsored addict to make one more big drug deal. A monologue, as a literary device, inherently brings an audience closer to a character by reducing the space between the audience and the speaker, and Rex’s speech about his sacrifice in ‘Nam is no exception, but I still can’t help but feel that this wily old veteran is exploiting a fellow addict, enabling Eddie while Rex can sit back, out of danger of relapse.

The issue ends with Eddie running headlong after the symbiote god which is terrorizing Manhattan: 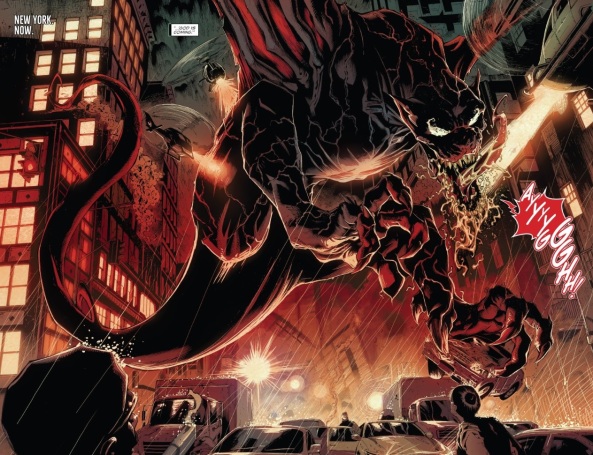 Eddie Brock is literally chasing the dragon. Trying to experience the bliss of the first high drives addicts deeper and deeper into addiction, and — aside from a bad batch of drugs — might be the highest cause of accidental overdoses. This symbiote god symbolizes more than just a new Big Bad stomping through poor New York City, the Marvel Mecca for monster attacks. This dragon might also be — to use his own word — Brock’s reckoning. Eddie, for decades, has tried to manage his addiction, all the while relying on his crutch more and more, but the toll taken might finally catch up to him, as it does for us all — an eventuality familiar to all addicts. Though the end of the issue teases a team up with the Miles Morales Spider-Man, if the creative team follows through with the addiction parable it seems to be setting up, then perhaps the audience will get a glimpse into the psyche of an addict, but I’m not so sure how well that narrative will work out for Eddie Brock.