All fictional characters — especially in the compressed world of superhero comics — start as types. It’s only as we spend more time with them that they can be fleshed out into more fully-realized, nuanced characters. But, of course, being a type is often all a given character may need to be. And so, for decades, J. Jonah Jameson was little more than the irritable, muckraking editor of the Daily Bugle. That’s not a failure — it’s all he really needed to be to move the story forward, and he was still plenty entertaining. But as with any character that’s around for the better part of a century, those little glimpses we got of him started to add up, and creators started exploring who he was behind all of that bluster, giving us the JJJ we all know and love. He’s still that irritable muckraker, but we understand that there’s more too him. Indeed, there’s enough there that Jameson can anchor a story himself every now and then, as he does in Peter Parker: The Spectacular Spider-Man Annual 1.

The feature in that issue, Chip Zdarsky and Michael Allred’s “Paper Trail,” focuses on Jameson’s relationship with his own former editor (and later rival), Barney Bushkin. Bushkin has long been a facet of Spider-Man’s world, but this issue reimagines him as the J. Jonah Jameson to JJJ’s Spider-Man, devising his own “Jonah-Slayer” to exact vengeance on Jameson. It ends up being a kind of soft vengeance, but Bushkin has some legitimate gripes with Jameson, who is now trying his hardest to be a better person. The two end up reconciling, with Jameson bringing Bushkin on as the producer of his new radio show. It’s a surprisingly sweet story that offers us glimpses into Jameson’s life over the past 20 years, but the real gut-punch for me comes as Jameson reflects on an unexpected act of charity from his past: 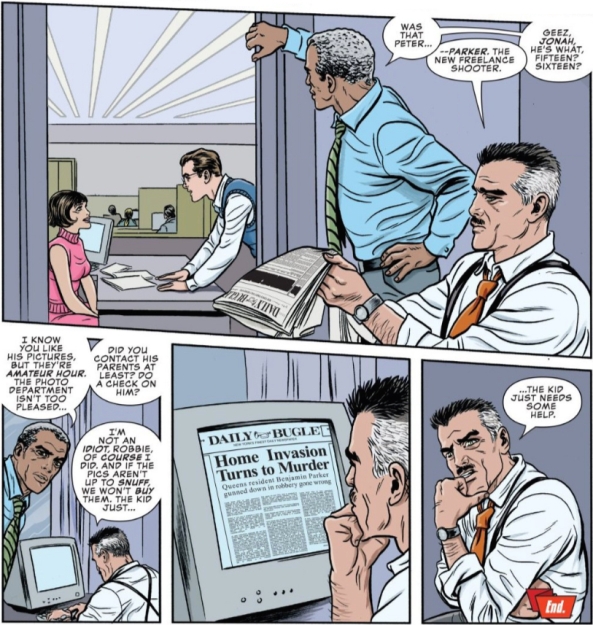 Jameson was being nice that whole time? It completely changes the dynamic of their relationship as we know it (and kind of dunks on Pete’s photography skills), offering a precedent for Jameson’s kindness that we never knew was there.

That’s a brilliant turn by Zdarsky, but it wouldn’t be much without Allred’s stellar acting. He sells those genuine moments, mostly by virtue of really leaning into the more exaggerated ones. Allred’s style has this incredible flexibility that can stretch from naturalistic to almost Chuck Jones-ian cartooniness, which opens up a whole emotional range that few artists can tap into. I can’t really include enough images to do a proper survey of that range, so instead, I’ll just include my favorite panel from the issue: Peter’s face as he’s caught double-booking his “date” spot.

Not many panels make me laugh out loud, but this one somehow manages to do it every time I see it. It’s over-the-top, sure, but it’s absolutely perfect for this moment. This series in a nutshell, really.