By Michael DeLaney and Ryan Mogge

Michael: Justice League 2 is all over the place, and for once that is intended as a compliment. With Dark Knights: Metal and Justice League: No Justice, Scott Snyder has gotten plenty of practice writing a team dynamic in the face of epic-level threats. And while both of those stories had their highs and lows, Justice League has been a pretty solid, fun ride thus far.

From his 50+ issues with the character, Snyder has the most intimate knowledge of Batman, and puts him at the center of Justice League. Batman is the glue that keeps the whole team together really, as a leader and as a source of humor. Snyder continues to play Batman as the straight man, whose pragmatism leads him to a comedic lack of self-awareness.

To be honest, I don’t know if I would respond well to an “I’m inside of” joke from anyone BUT Batman. Earlier in the issue, Batman’s mental/physical discipline is put on display as uses Swamp Thing’s connection with The Green to communicate with John Stewart while he simultaneously fights a mutated Killer Croc with the League. I swear, Killer Croc is ALWAYS getting mutated into a bigger, badder version of himself.

Which brings us to the John Stewart of it all. From the cover solicits, it’s clear that John is to be the resident Green Lantern of Snyder’s Justice League, and good for him. John is reluctant to join up with the League however, especially due to his failure at Xanshi.

For those who didn’t read the entirety of the Green Lantern books pre-New 52, John failed to stop a bomb planted at the core of the planet Xanshi, resulting in the destruction of the planet. Xanshi is John’s own personal Alderaan. 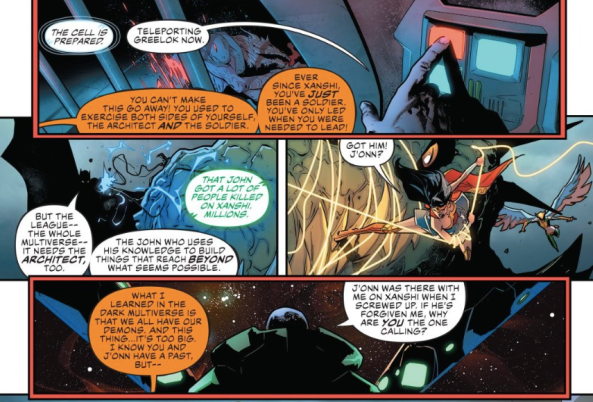 I like the fact that Snyder dug deep into history and recalled that Martian Manhunter was with John at Xanshi, giving them a potential conflict, but I don’t like the harping on “John let Xanshi die.”

Xanshi blew up in 1988 after all, and the character of John Stewart has gone through a whole lot since — most notably, becoming the leader of the Green Lantern Corps. I might be letting personal feelings get in the way but I think that this regression does a disservice to John.

There is a palpable effort to bring in the science and specifics of the many corners of the DCU into Justice League 2. In one issue of Justice League we have references to the Speed Force, the Emotional Spectrum, the Multiverse, the Green and The Source Wall. Snyder is making a concerted effort to make the worlds of each Leaguer equally important while at the same time he is building his own myth.

“The Totality” is still vaguely defined, but it is reinforcing that the various sciences, philosophies and magics of the DCU are on the same playing field. There is a very Annihilation feel to The Totality, as it alters the physiology and genetic makeup of anything that enters it. Because of its effect, it leaves the invulnerable Superman and the shape-shifting Martian Manhunter to be the only Leaguers able to venture forth. The way J’onn is mentally controlling his physiology not to be affected by The Totality is a brilliant use of his powers.

Finally, I’ll touch on the portrayal of Lex Luthor. Besides maybe Martian Manhunter, Lex is the only character who has an understanding of the full scope of what our heroes and villains are facing. And like any master strategist, he is keeping that information very close to the chest, not even trusting his “allies” in the Legion of Doom. Snyder has a very interesting take on Lex, a man who is simultaneously the smartest and craziest man in the room. The opening scene of the issue is Lex blowing up a “Legionnaire’s Club Chapter House” for no other reason than to spite his dead father. And at the end of the issue he cackles madly as he microscopically travels through Superman’s veins, his…favorite place?

I’m all about the suggestion that Lex is in love with Superman and/or his celaphic vein.

Ryan what did you think about Justice League 2? Were you bummed that The Flash has to sit the bench on a Multiversal adventure? If Hawkgirl and Batman (and Luthor) are passengers in Martian Manhunter and Superman’s bodies, does that kind of make them their personal Megazords/Voltrons? (I don’t know anything about Voltron.) And just for kicks — any guesses on who that baby is?

Ryan: I’m going to guess the baby is somehow an infant Spectre. To be honest, this is less of a guess and more a result of a google search for “most powerful in DC comics” and picking one with green in their styling. It’s a sign of the issue’s strength that I am more intrigued than annoyed by the sequence in which Grodd and Lex hint around the identity of the super-baby. With so much happening, it’s almost a relief that Snyder doesn’t fully introduce this element.

By the same token, with the Legion of Doom and the Ultraviolet John as threats outside the bubble in the desert, it’s good that we have The Flash back at base. With Lex’s plans, I wouldn’t count The Flash as completely sidelined during this adventure. Snyder and Jimenez are aggressively efficient in the Justice League scenes. In the first panel in The Hall of Justice, we get plot and character beats.

Snyder shows us The Flash’s frustration and inability to work at the level he expects of himself. For Hawkgirl, we get an example of her offering advice only to be dismissed at first. Plus, the car itself is setting up a plot to for The Titans. Before the issue is over, Hawkgirl will be asked to join the primary mission despite her own concerns about readiness. We see her thinking and how her experience is an asset here while also showing that The Flash may not be the best fit for any action right now. It’s not the most beautiful layout, but we’re given a ton of information without crowding.

I’m not sure if Superman and Martian Manhunter are going have the kind of deference to their passengers that a Megazord has. The reference that I was getting was Innerspace(1987) a much goofier take on miniaturized friends inside each other. Given that film, I expect Lex to play some Sam Cooke at an inopportune moment.

Seriously, the idea of Lex traveling in Superman’s veins while Batman is in there, too, is enough for a really compelling story. Instead it’s just a piece of a much larger one, centered around the Totality. My first read through of this issue, I was pretty overwhelmed with all of the goings-on. A closer read shows that while there is a lot happening, Snyder is offering puzzle pieces that could come together for a single arc. To belabor the metaphor: for every corner piece like Superman and Martian Manhunter entering the Totality, we have center pieces like the mystery baby. It’s difficult to know whether it will all eventually fit together, but the individual pieces are compelling in this issue.