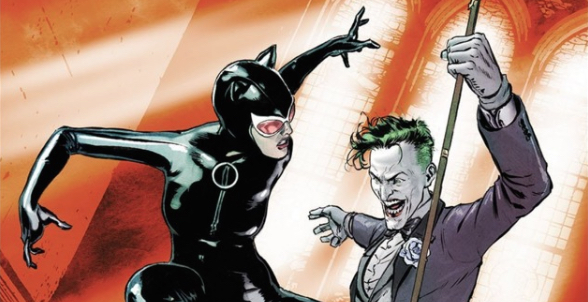 Tom King and Mikel Janin’s Batman 49 gives Catwoman and Joker an opportunity to discuss the role humor plays in both their lives and the greater Batman franchise. Joker’s goal in all of this is to get a laugh out of Selina, and by the end of the issue, she obliges him with a joke of her own and a chuckle. Sounds like Killing Joke, right? Here’s the thing – King gets us there by trading in connection, nostalgia and shared history, where Alan Moore and Brian Bolland got there by trading in misery. The result is an inversion on the classic story, and an update on the storytelling values in Batman and in comics in general.

The set-up for “Joker tries to get Catwoman to laugh” is charmingly simple, especially when contrasted with Joker’s baroque machinations in The Killing Joke. The Cat and the Clown are squared off in a church, and Janin pulls an excellent psyche-out by delivering an extremely short blockbuster fight scene. 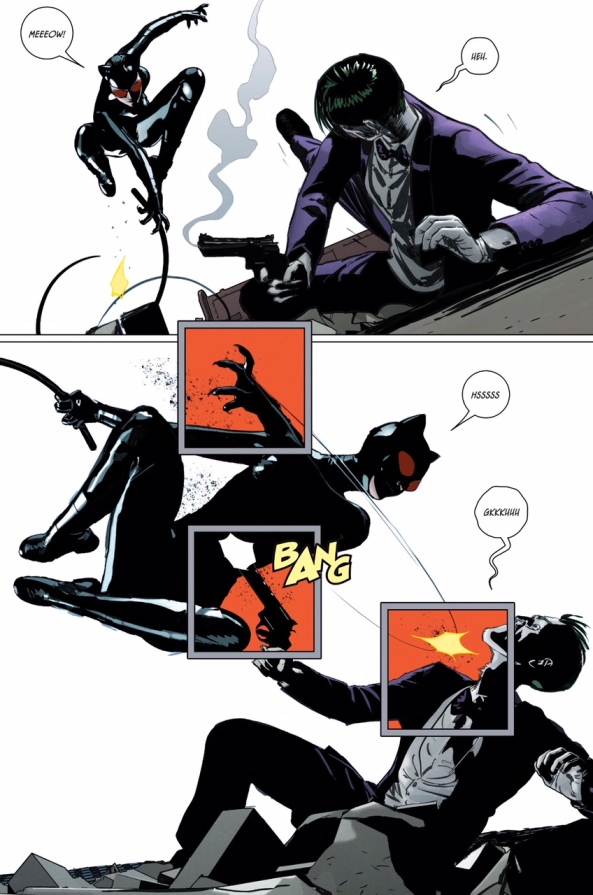 Janin keeps it simple and dynamic. Except for a bit of flooring or an odd column or pew, the background completely disappears, leaving only the two actively players in the scene. The solid white backgrounds are interrupted by red panels, which punctuate the fight with beats of specific violence. In this case, a throat-slice and a gun shot.

And that’s when the action of the issue slows way down. Joker and Catwoman spend the rest of the issue on the ground, holding their wounds, and reminiscing about “the old days.” Joker’s probing question: why does Selina never laugh? Joker, and the rest of the gimmicky idiots, built whole worlds and personas out of dissonance. Batman, and Gotham, and organized crime are all scary and gritty, so the enemies of Batman have to be the opposite. At least, that’s how Joker sees it. He’s very frank throughout this issue, stating all of the usual bullet points: Batman created him, his chaos gives Batman’s life meaning, all the villains actually love Batman, and so on. Joker, as Batman’s opposite, is a destabilizing influence, which makes Batman miserable, which is what Batman is all about.

Conflict is the heart of drama, so in some ways, being miserable is what Batman, the series, was all about. Joker sums this up succinctly: “He can’t be happy and also be Batman.” We heard this kind of rationale coming out of DC editorial in 2013, when J.H. Williams III and W. Haden Blackman weren’t able to marry Batwoman to Detective Maggie Sawyer. Happiness and fulfillment are antithetical to what the Bat-family is. Or, at least, it’s antithetical to what the Bat-family was.

In fact, this whole issue is a rewriting of what a Batman story has to be. Batman can be happy. Just like Joker can get a sincere laugh out of an overly-serious character, not by inflicting psychological horrors upon their loved ones, but by having a lovely conversation about their shared experiences. It’s a post-deconstructionalist view of Batman – we don’t need to break down the centuries of comics history that make the character work, we can just enjoy the fact that he does.

One comment on “Batman 49 is the Anti-“The Killing Joke””