I’m so enamored of Infidel‘s social commentary, it’s easy to neglect just how skillful of a haunted house story it is. And I say that as someone who isn’t into horror generally or horror comics, specifically. I’m sure the social commentary elements help make the ghouls of this series feel so insidious, but this series manages to be scary far beyond its concepts. That is, the effectiveness of the horror relies on the skills of writer Pornsak Pichetshote and artist Aaron Campbell, and issue 4 perfectly demonstrates how they deliver scares in totally unexpected ways.

And I really do want to focus on “unexpected” here. We know Campbell can give us unsettling ghouls and that Pichetshote can build a creeping sense of dread, but this issue manages to find new ways to frighten us. Specifically, they manage the one aspect of horror movies that I didn’t think comics were capable of: the jump scare. To be clear: comics can do a surprise reveal as well as any medium — we’ve all seen tension built up to a page turn before — but a jump scare demands almost the opposite. That is, we need to not expect a reveal at the page turn, and then get a very sudden one, anyway, which is exactly what Pichetshote and Campbell do here.

Let’s back up. Much of this issue takes place at the hospital, where Aisha’s condition has taken a turn for the worse. Sendhil introduces the idea that some medical files back at the house might be what the doctors need to save her. Then Ethan returns with the additional idea that an emotionally significant possession might also help Aisha. Our characters now have sufficient reason to venture back into the haunted house, only we learn that Sendhil (unaware of the dangers) has already gone back alone. 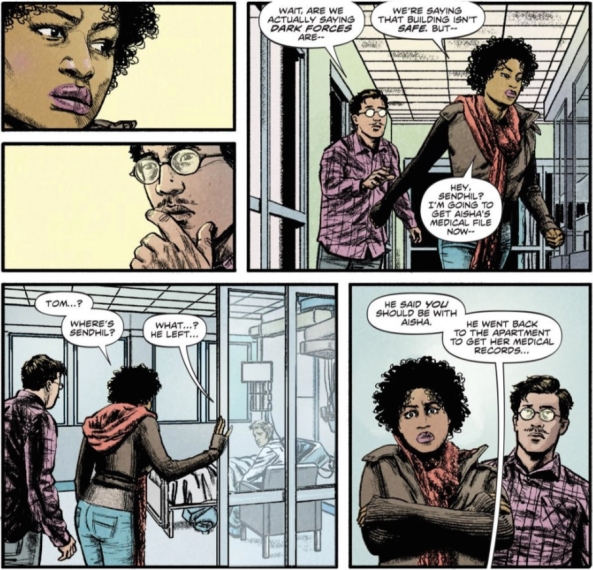 It’s the kind of bombshell you might expect to have some immediate follow-up. That is, this is a scene-altering reveal that forces Medina and Ethan into crisis mode as they rush off to rescue Sendhil. Instead, it’s a scene-ending reveal, perfectly placed to set up this totally unexpected cut to Sendhil who we only just learned was at the house:

To add a little oomph, this is the only double page spread in the whole issue, and Campbell bleeds it right to the edge of the page, simulating the ear-splitting loudness we normally associate with jump-scares. And then it’s over. We don’t spend any more time with Sendhil after this moment, once again simulating the very short nature of those jump scares. Effectively, this panel is (as my old jazz teacher used to say) fat as a house, but short as a mouse.

And like all the best jump scares, this one puts us on the edge of our seat for the actual scary stuff. Pichetshote and Campbell are just proving that they can startle us to raise our anxiety through the rest of the issue as we wait for the other shoe to drop. But like the best magicians, they know not to repeat the same trick twice. The rest of the issue is as tense as this series has ever been, wringing emotional horror out of just about every single beat, but there’s no more jump scares. I mean, this series had to turn back to those heady social concepts at some point, right?