Teacher: Daria, what about your goal?
Daria: Uhmmm, I don’t have any.
Teacher: Oh come, Daria! You must have some goal.
Daria: My goal is not to wake up at forty with the bitter realization that I’ve wasted my life in a job I hate, because I was forced to decide on a career in my teens.

Society asks a lot of teenagers, especially when it comes to big decisions. These same children who aren’t allowed to drink, vote, or often even have a say in how they present themselves to the world are expected to commit to a career path, often burying themselves in debt to do it; it’s a daunting decision for anyone, but especially for young people who aren’t quite sure who they really are and what they want out of life yet. None of the young heroes (or “villains”) of Runaways 10 are contemplating college at the moment, but they’re nonetheless faced with similarly difficult, life-altering decisions that they simply just aren’t ready, or even qualified, to make yet.

They’re also dilemmas where there’s no “good” or “right” choice that will satisfy everyone. Rainbow Rowell and Kris Anka open the issue on a flashback to Thor villain Enchantress gifting Abigail two cupcakes, both of which will eternally freeze whoever eats it at age 13, and one serving of the antidote. That nicely sets up the conflict the Runaways later face — do they use the only antidote to restore Julie Powers, an innocent victim in all of this, even if it means dooming Abigail?

Rowell and Anka, importantly, establish through Julie that the cupcakes effect emotions, hormones, and mentality as well as physical growth — Abigail may be well over 50 years old, but she’s still got the heightened emotions and not-yet-fully-developed decision making capabilities of a 13 year old. Yes, she made a decision to eat the cupcake, but did she ever really understand what that would mean? Should she be beholden to a choice she made at 13 for all of eternity?

Probably not, but the Runaways are also probably right to prioritize Julie over Abigail. Like I said, there’s no good choice here, and their ultimate decision is played more as a tragedy than a victory, even if they did achieve the goal they initially set out to. 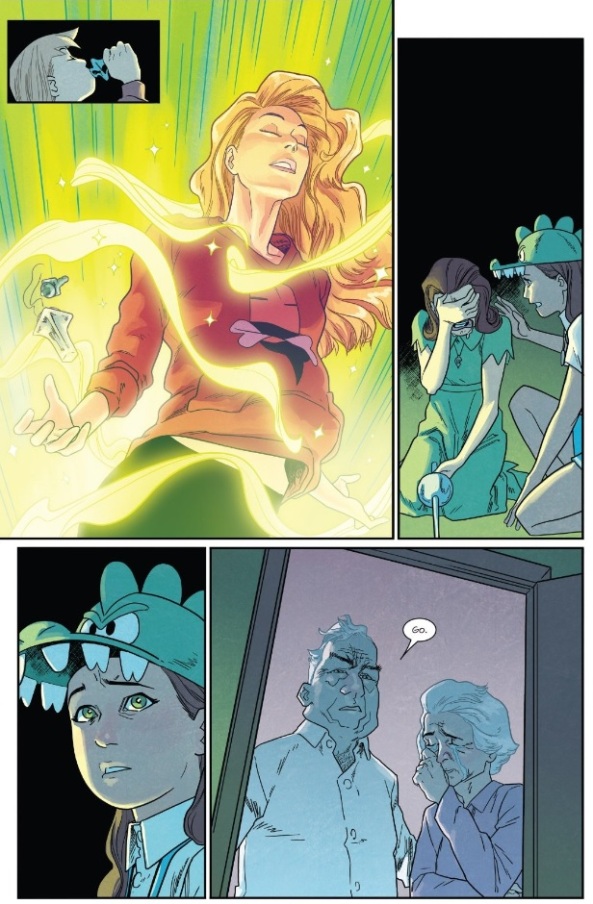 Notably, the Runaways themselves may not be mature enough to make such a decision for Abigail and Julie either. They approach the situation without all the facts and with a heavy hand, threatening to murder Abigail’s parents and eventually dooming their child to save a friend. It’s probably a decision they didn’t have the authority or perspective to make, yet it’s one they had to anyway. Like almost every young person, they were backed into a corner and forced to make a drastic decision even if they weren’t fully ready or qualified to. Here’s hoping it isn’t one they come to regret.

Of course, Karolina and Julie’s final page break-up reminds us all that we never really stop changing and growing (or growing apart), and that we may never really be “qualified” to make major decisions at any age because we never know where life will take us or how our perspectives will change. Sometimes all you can do is make the best decision you can with the information you have and simply live with the consequences, whether they’re “fair” or not.

3 comments on “Impossible Decisions at Impossible Ages in Runaways 10”