History is an intrinsic facet of The Wicked + The Divine in multiple ways. Its story — and deities — have existed for the majority of recorded human history, and Kieron Gillen and Jamie McKelvie have gone to great lengths to accurately reflect that throughout the series. History is also a far more personal thing in WicDiv, though. There’s not a single character who can escape the pull of their own personal history, be it the baggage of Ananke/Minerva’s own six thousand year long existence, or the brief-yet-intense history behind the Morrigan and Baphomet/Marian and Cameron’s complex, tragic romance. Both tales reach inevitable — yet very different — climaxes in WicDiv 37.

Ananke/Minerva’s climax actually comes a few thousand years ago, when she botches her usual ritual by trying to use only three heads instead of four. It’s not clear whether Ananke actually dies and is then resurrected 90 years later, or if her consciousness is somehow trapped within darkness for all that time, but either way, Gillen and McKelvie make sure the audience can feel exactly how excruciating this period was for Ananke by launching us into ten full pages of darkness, a black panel for every single year lost. When Ananke/Minerva returns all she can say is “never again.” What before she may have treated as a game now has 90 years of history proving otherwise; the consequences if she loses are ghastly, and no doubt drive her increasingly driven, mad behavior as the centuries pass.

The fight — nay, the all-out war — that breaks out between Baphomet and the Morrigan is fueled by more recent history, but no less turbulent. Readers have watched this complex, often toxic relationship play out throughout WicDiv, so Gillen and McKelvie don’t feel the need to recap the whole thing. Instead, they just contrast the beginning of their relationship with its inevitable, violent end.

It’s more of Gillen and McKelvie’s trademark formal inventiveness, but also a stark contrast to the inventiveness they show in Ananke’s half of the issue, full of color, fire, and fury instead of nothingness and monotony. The panel borders shift from ravens to flames depending on which god has the upper hand at any given moment, while the beginning and the end of Baph and Morrigan’s relationship play out simultaneously throughout the sequence. This serves a dual purpose; it shows that this violent end was probably always inevitable, but also that the good things that brought these two together are still present, still in their minds even as they try to tear each other to pieces.

That last point is vital to the climax of this story. Badb ends up killing Baphomet, but it isn’t what her other two personalities wanted. A history of dysfunction, jealousy, and abuse may have lead them to this point, but the good times, the history of love and passion they shared, ultimately leads Gentle Annie to trade her life for Baphomet’s.

Besides their focus on history, both of WicDiv 37‘s plots share one more thing in common: Ananke/Minerva and the Morrigan’s reactions to the horror they faced. 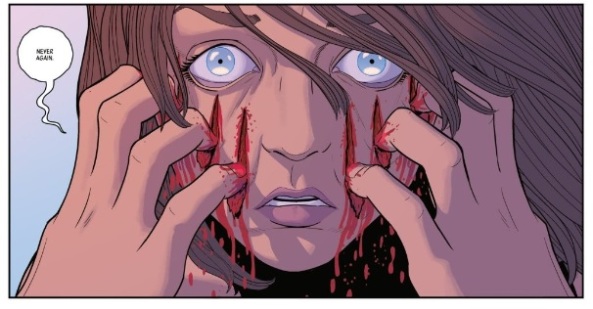 I don’t really know what to make of these parallels yet, but they can’t be coincidental. If there’s one thing WicDiv has taught me, it’s that history tends to repeat itself, and it’s always, always significant when it does.