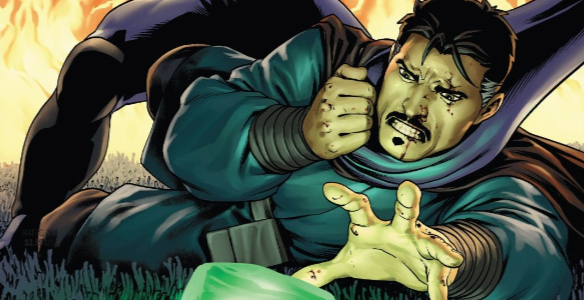 If you’ve ever had the fortune (or misfortune as it might be) of being an English major, you’ve likely entertained the idea of being a writer at some point in time — probably college. So you penned a couple stories that were mediocre at best and realized along the way that writing is actually quite difficult. Specifically, writing dialogue is a hard part of the process, if for no other reason than it is difficult to make it sound natural. This being so, I don’t blame Mark Waid for having hard time writing conversation in Doctor Strange 3, but his difficulty in writing it sure makes this issue hard to enjoy.

Most of the dialogue in this issue is between Stephen and his new partner in magic, Kanna. In theory, they have a playful relationship where they banter back and forth about magic and other related things. But when they aren’t talking directly about magic, it becomes apparent that Waid doesn’t think they would talk like normal people. Take, for instance, this exchange when they are discussing a Skrull magic user that Kanna used to know.

Before this, Kanna told Steven that they would be visiting a Skrull planet and he voiced his reticence to do that. In trying to quell Stephen’s fears, Kanna then launches into a discussion of her sex life with a shapeshifter, as if that really has anything to do with making Stephen feel less fearful. This dialogue hints at something ugly in the way Mark Waid is having Kanna speak. By having Kanna mention her sex life off the cuff, Waid has reduced her to something close to a sex object. This is so because there’s no reason why Kanna, in vouching for Bt’nx would mention that he’s great at sex. It would be like if I was introducing my friend to a complete stranger and mentioned that he’s a great lay. It’s just weird and unnatural and isn’t the way any reasonable person would speak.

If that were the only faux pas in this issue it would be annoying, but not damning, however there are instances like this littered throughout the issue. Paired with the odd choice of third person narrator continuing to reference the main characters by their jobs and not their names, and the whole issue lacks a natural sounding voice that severely takes away from an otherwise fun story.

One comment on “They Said What? in Doctor Strange 3”