Spencer: I’ve only recently become familiar with Joëlle Jones, but it was immediately apparent from her work that she not only cares about fashion, but that she has a real talent for bringing it out on the page. It should be no surprise, then, that fashion — at least in a sense — seems to be one of the underlying themes of Jones’ Catwoman 1. I don’t necessarily mean fashion as in runways and models, although Jones’ take on Selina Kyle could certainly put Tyra Banks to shame — I mean fashion as in the idea of clothing, costumes, and disguises, what they mean to the public, and what they mean to the individuals wearing them.

Costumes have many functions in comic books, but I think the most important is making a character immediately recognizable, sometimes from silhouette alone. In some of the indie comics we cover with large casts of “normal” human characters, I sometimes have trouble keeping track of who is who, but with superheroes you can take just a quick glance at them and immediately tell them apart, and often even get a feel for the character’s personality or powers in the process. Jones uses this fact to her advantage at the outset of Catwoman 1.

The issue’s very first page gives us a shot of Catwoman, firing a gun — it’s a bit out of character for her, but it’s Catwoman’s book, Catwoman’s costume, so it must be her, right — the gun must just be part of her coping with leaving Bruce, right? The rest of this opening sequence cuts between Catwoman running from cops, Selina gambling, and Villa Hermosa’s “First Lady” Raina Creel being interviewed on TV. It just seems obvious that these three different stories aren’t playing out simultaneously, because Selina can’t be in two places at once, right?

Nope; it’s just Jones taking advantage of the audience’s expectation that, if they’re seeing the Catwoman costume, they’re seeing Catwoman herself. We’re not, though; in-universe Creel is taking advantage of the same expectations, dressing her flunkies up in Catwoman costumes in order to frame Selina (although to what end, we don’t know). It works just as well there, because the police and the media immediately assume that it is indeed the real Catwoman running around murdering cops.

Creel is using fashion and costumes — in essence, identity itself — as a tool, not just with Catwoman, but when it comes to herself, too.

On TV, the people of Villa Hermosa see a smiling, subservient woman, but that’s just the image Creel wants to project to deflect suspicion from herself. Not only is she physically in far worse condition than she lets the public see, but she also has far more power over the city than even her husband, the Governor. Again, her actual physical disguise, the costume she puts on, is just a tool to her, one she wields deftly at that.

Things are a bit more personal for Selina Kyle, and not just because it’s her name getting dragged through the mud (though that doesn’t help). Throughout the first two acts of the issue, we only see Selina in her street clothes, gambling and exploring and trying to find some peace. She seems to have left Catwoman behind in Gotham, a sentiment made literal by her leaving her actual Catwoman costume behind. So when Alfred mails Selina her suit, it obviously shakes her up.

Of course she’s hurt by Alfred’s note, and the reminder it brings her of the love she left behind. But that suit, that costume, is a visual representation of the person Selina was in Gotham City. She can’t be that person anymore, so when she eventually does take to the streets as Catwoman, it’s in an entirely new suit. 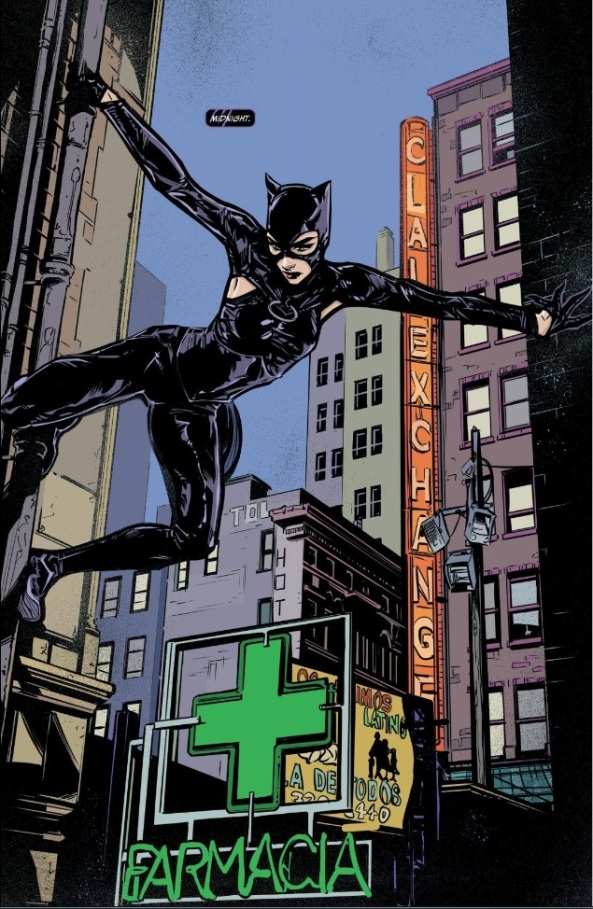 There’s practical reasons for this choice on Jones’ part, of course. She no doubt wanted to put her own unique spin on Catwoman’s visual, and it’s also a handy way to tell Selina apart from her impersonators. But in-universe, it seems clear that Selina wants to be an entirely new Catwoman, and updating her costume seems to be an easy way to make that distinction. Her costume, and the way she presents herself, is an integral part of Selina’s identity, whatever that may be at the moment.

That’s what makes Creel’s crimes all the more heinous — she’s not just framing Selina, she’s doing so by hijacking Selina’s image, her entire identity, and turning it against her. That’d be crushing under even normal circumstances, but given the recent upheavals in Selina’s life it’s even moreso. Leaving Gotham has already left Selina confused as to who she is now without Bruce; having her entire identity co-opted at the same time must be even more disorienting.

Jones’ use of fashion and costumes as a stand-in for identity allows her to construct a powerful metaphor, one that lets readers see how Selina and Creel view themselves on a visual level before we ever even get to the words. I’m excited to see how Jones carries this metaphor forward into future issues, and especially how Selina’s identity and appearance continue to evolve and intertwine. How about you, Mark? And did you find this issue easy to follow? I’ll admit that there’s a few times Jones’ layouts lost me, mostly early in the issue when the Catwoman-impostor/Selina/Creel stories are all playing out simultaneously — even with letterer Josh Reed trying his darndest to direct readers’ eyes, there’s a few transitions from panels on opposite sides of the page, skipping over other intruding panels, that just don’t work in that sequence.

Mark: Generously, I will say I didn’t find the issue difficult to follow so much as rewarding of a second read through. There’s no real indication that all of the events of the first few pages are happening simultaneously, so once the identity of the Catwoman imposter is revealed it becomes easier to go back and read through the beginning as three compartmentalized events. Still, even with the knowledge that there are multiple Catwomans running around Villa Hermosa, the early going is not entirely confusion free. If you follow only the rooftop confrontation of Not Catwoman and the police, it goes right from Catwoman firing a gun to this panel:

I’m completely at a loss as to what’s supposed to be happening here.

But small quirks aside, the larger issues of identity Jones is playing with in Catwoman 1 have the potential for this to be a really interesting book.

Identity is such a strange thing. The way we perceive ourselves and the way the rest of the world sees us are totally different, but we put a significant amount of work into trying to control the perception of other people anyway; clothes, hair, makeup, cars, the way we speak — on some level it’s all consciously crafted with the intent of making a statement about ourselves. And it doesn’t even necessarily work! The signal I’m trying to send and the message you’re receiving could easily be two different things.

But at least the way we style our hair or the way we choose whether or not to wear our oversized “Give Me All of the Chocolate and No One Gets Hurt” Cathy t-shirt is within our control. Our identity can very easily be co-opted in ways out of our control. A picture we post on social media can easily be used by someone else to set up a fake dating profile. Suddenly they’re presenting as “you” and people are perceiving them to be ”you”, and it’s totally out of your control — you probably don’t even know it’s happening.

The question of identity is even stickier for a superhero. Selina Kyle is Catwoman, but what makes that true? Is it the fact that she dresses in a cat-like costume? If it’s just the clothes, than all of the people dressed in Catwoman costumes at the end of issue can rightly claim to be Catwoman. And if it’s not just the clothes…then what is it? What makes Selina the definitive Catwoman and the rest imposters?

Bruce Wayne knows Batman is a title, a mantle that has been passed on to others at different points in time. Whatever unhealthy hang ups Bruce has regarding being Batman, he’s at least able to put that much distance between himself and the cowl. Even Creel marks a definitive line between her Callista Gingrich-esque mask and her true self.

Selina, on the other hand, has become inextricably coiled with “Catwoman.” There is no separation. The Catwoman “costume” is less a disguise at this point and more just the way Selina chooses to present herself to the world on special occasions, like you or I would get dressed up to go to a fancy restaurant. And, just like us, there’s always the chance Selina runs into someone else wearing the same thing.

So if the answer to the question of “who is Catwoman?” can be “anyone”, then the real question becomes “who is Selina Kyle?” I’m excited for Jones to explore the possibilities.