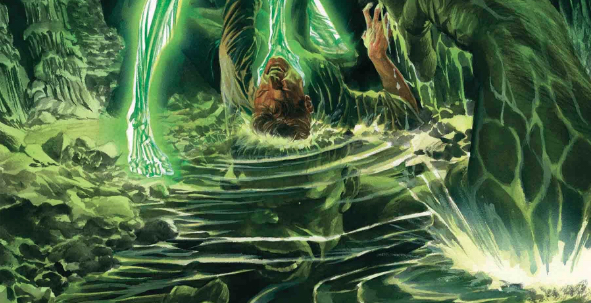 What scares you in media? I mean, we’ll all flinch at a well-timed jump scare: a sting of music, a flash of light, and suddenly we’re face to face with a monster. That’s a scare based on your senses, the creators manipulating your biological responses like buttons on a controller. Writer Al Ewing and artists Joe Bennett, Ruy José and Paul Mounts use sense-based scares as a smokescreen for the real horrors of The Immortal Hulk 2: irony.

This issue is so thematically compact and wonderful, it’s one of those rare superhero comics I’d recommend to anyone with a passing interest in The Hulk or horror comics. Even as Banner’s narration dips into some Civil War II plot nonsense, everything you need to understand the issue is contained within these 20 pages.

Ewing and company paint such a thorough picture of Banner’s life on the road, that the sights, sounds, smells and tastes of his experience are essentially tangible. Bruce talks about the importance of the senses, and Jungian philosophy about the dangers of focusing on physical stimuli, but it’s sort of impossible to ignore the universality of an experience like this.

Bennet is playing around with some elemental American imagery and Mounts and José cast just the right mix of light and shadow on the scene to sell the cold dewey sensation of going to a dinner just before sunrise. Can you hear the squeak of the red vinyl booth? Can you smell that coffee? Can you taste those eggs? Sensation. It’s what Bruce, the creative team and the reader are all focused on for the beginning of this story.

It’s also what Dr. Frye is focused on. Perhaps “obsessed about” is more accurate. There’s a beautiful panel during his confession which is totally empty except for the narration boxes.

Frye’s terrified of the absence of sensational experience, and the team represents that by simply presenting it. Here is nothing. After pages of creepily rendered, electrically colored, moody horror, here is nothing. And that’s when Hulk gives away the real game. “I look for irony.” That’s where the real horror is. Yes, it’s scary and sad that Del is dead. But the truly gnarly part of it is why. Dr. Frye wanted to rescue his son from the abyss, but instead killed him and effectively sentenced others to die. Suddenly, all that Jungian theory makes sense:

“If the conscious mind focuses on physical stimuli… taste and smell, the evidence of the scenes, science… that would make the subconscious, repressed mind the domain of the intuition. Unscientific thought. Mysticism and magical thinking. Gut feelings and hunches.”

Ewing, Bennet, José and Mounts lead us into this focus on the physical stimuli, only to leave us vulnerable to the true horrors of that which we cannot perceive.

2 comments on “Sensational Irony in The Immortal Hulk 2”