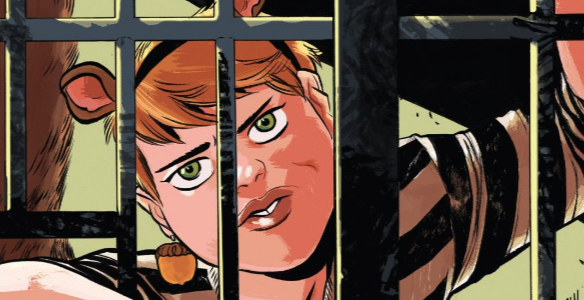 Kraven the Hunter is not only the very first enemy Doreen Green defeated way back when Ryan North and Erica Henderson launched The Unbeatable Squirrel Girl, but he’s also the first enemy she reformed. Unlike the other villains whose lives Doreen has helped turn around, Kraven has continued to pop up as a recurring character ever since, allowing the creative team to explore life after redemption and just what, exactly, Kraven looks like as a “good guy.” With this image now firmly in place, North and artist Derek Charm use The Unbeatable Squirrel 34 to muddy and complicate it in fascinatingly complex and nuanced ways. What redemption means for Kraven may not be the same for Doreen, or Spider-Man, or the police, or the people of NYC, and there may simply be no way to reconcile these various viewpoints.

Doreen’s attempt to protect Kraven from the NYPD has led to their entire crew being arrested, and to Doreen seeing, for the first time, Kraven’s full rap sheet. She’s understandably rattled, but quickly comforted not only by Kraven’s reassurances that his crimes are in the past and that the man he is today has changed, but by Brain Drain’s rousing testimonial as well. 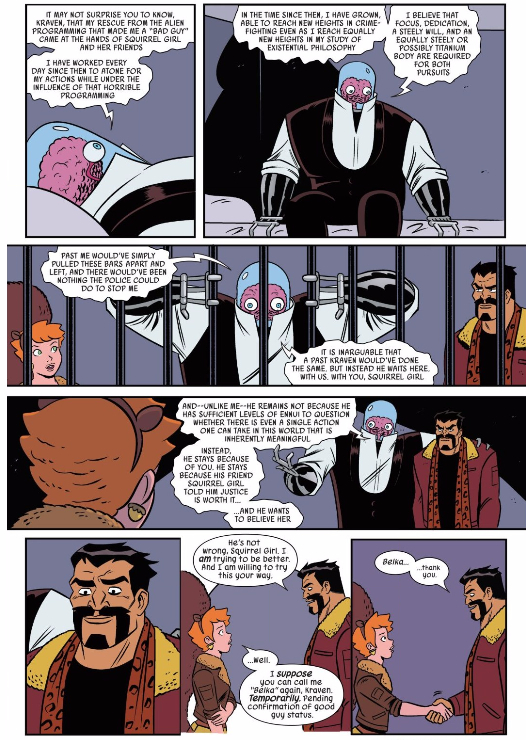 Brain Drain is another USG success story, but he’s one with far less history than Kraven, and that ends up mattering quite a bit when the crew’s case goes to court. Though the jury finds Doreen and her friends Not Guilty, they don’t do the same for Kraven, deciding that he should spend his life in prison. In a way, this is their own stab at “redeeming” Kraven — while Doreen attempts to make Kraven into a hero to make up for his past crimes, the jury wants him to atone through punishment.

North promises a happy ending to this story in next month’s issue, but it’s hard to see how we’ll reach that point. Not only do Doreen and the jury’s different ideas of redemption seem irreconcilable, but the guilty verdict has opened some deep psychic wounds within Kraven himself. 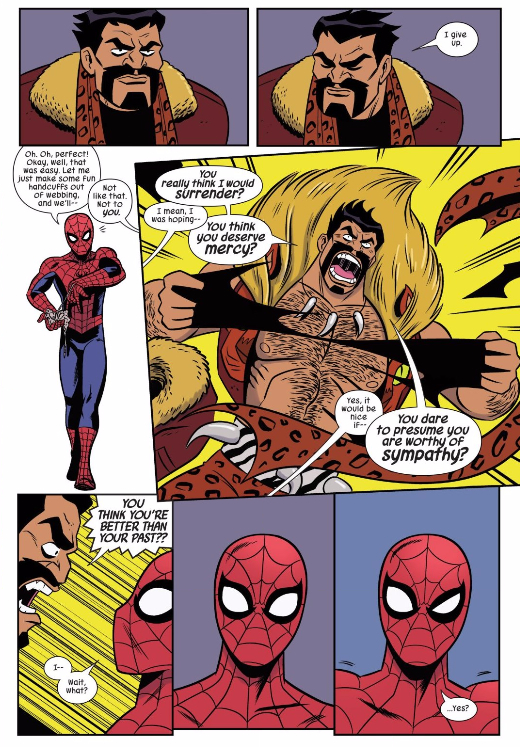 Can Kraven truly be redeemed when, deep down, he doesn’t think he deserves to be? Can past mistakes be atoned for by better actions in the future, or does there need to be some sort of attempt at reparative justice, some punishment to appease his victims — or does punishing repentant villains only make them feel worse, pushing them back towards crime instead of a brighter future, as it seems to be doing for Kraven above? There’s no easy answer, and certainly no answer which will satisfy everyone, which is what makes this issue so fascinating. This kind of complex morality is new territory for The Unbeatable Squirrel Girl, and North and Charm tackle it without ever losing the irreverent, emphatic tone and world they’ve created for this title. They may have finally put Doreen into an unwinnable scenario, and I can’t wait to see how she’ll eventually come out on top.