In The Immortal Hulk 3, reporter Jackie McGee is following up on a recent Hulk-related incident, interviewing four witnesses: “The Cop”, “The Bartender”, “The Old Lady” and “The Priest.” Series artist Joe Bennett is joined by Leonardo Romero, Marguerite Sauvage, Paul Hornschemeier and Gary Brown to visually highlight the there characters different perspectives on one Hulk sighting.

Romero covers the story as it happened through The Cop’s eyes: as a classic comic book showdown between good and evil. The Cop’s story is garnished with the spot-coloring effect of comics’ past, lending itself to the Cop’s antiquated, simplistic view of right and wrong. It is in this recollection alone that the troubled young man with gamma powers is even given a villainous moniker: Hotshot, The Human Ray Gun!

Contrast Romero’s heroic portrayal of the Hulk with Gary Brown’s horrific recounting of “The Priest’s Story” or Marguerite Sauvage’s rosy-colored “The Old Lady’s Story.” Brown’s portion of the book is a gothic horror story, covered in shadows and the occasional green glow of gamma radiation.

Meanwhile, Sauvage highlights the Old Lady’s loneliness, as she romanticizes “Hotshot’s” plight, making him a dead ringer for James Dean. 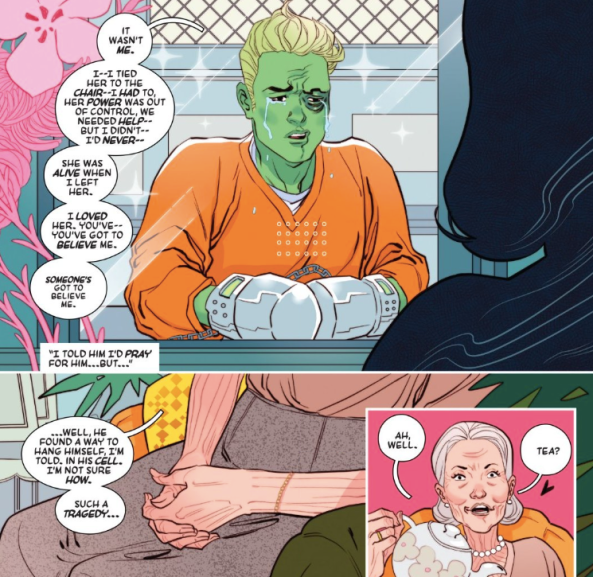 The Old Lady also has an air of privilege, sympathizing about the young man before quickly moving on to her afternoon tea.

Finally there is Paul Hornschemeier’s “The Bartender’s Story,” the only story technically not involving the Hulk. Horschemeier isn’t going for bombastic action, instead zeroing in on the way that we perceive and converse with one another.

For the bartender, a disheveled patron (Bruce Banner) is as much of a threat as the zombie Hulk that the priest recalls. The Cop idolizes the simple nature of superhero swashbuckling in the same way that the Old Lady idolizes a troubled handsome young man.

In The Immortal Hulk 3, The Hulk, Bruce Banner, and Hotshot are a rorschach test for each of the witnesses’ inherent biases, fears and desires.