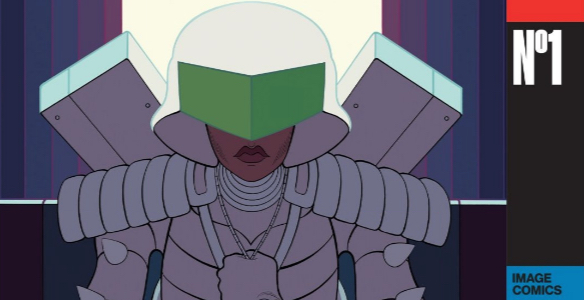 My wife is itinerantly averse to spoilers, to the point that she refuses to watch trailers for movies. It’s an attitude I can sympathize with (many trailers seem more like hyper-condensed edits of the entire film than teasers), but can’t fully understand — how could she possibly know if a movie appeals to her if she doesn’t know anything about it? To me, some foreknowledge of the genre and basic premise of a narrative is essential to my interest in it. Of course, in serialized media — especially ones with particularly high-concept premises — the first chapter might just cover the “basic premise,” effectively spoiling its own plot. But the thing I’ve always resented about “spoiler” talk is the way it privileges plotting (and especially surprise twists in plotting) over every other narrative element. There are real, unique pleasures to be mined from having more perspective than the characters within the narrative, and a well-told story will use those tools as effectively as any narrative twist. Aleš Kot and Tradd Moore demonstrate the value of those tools on both the micro and macro level in The New World 1.

The issue opens with a sort of contextual preamble, as Kot and Moore lay out the broad strokes of a nuclear attack and civil war that left the United States fractured and deeply stratified. That’s a high enough concept for some series, but that’s just the setting for the actual high-concept story Kot and Moore are telling here. What follows are introductions to our two romantic protagonists, run in clear parallel on facing pages. It’s a stunning effect, creating elegant double-page spreads of subtle symmetry, but what impresses me most about the structure is that it supports two reading orders. We might read down each page, consuming each as a separate (but clearly connected) unit, but we can also read across the spread, consuming each paralleled shot as a pair. The whole sequence supports this double-reading, but it’s the final spread that demands it: 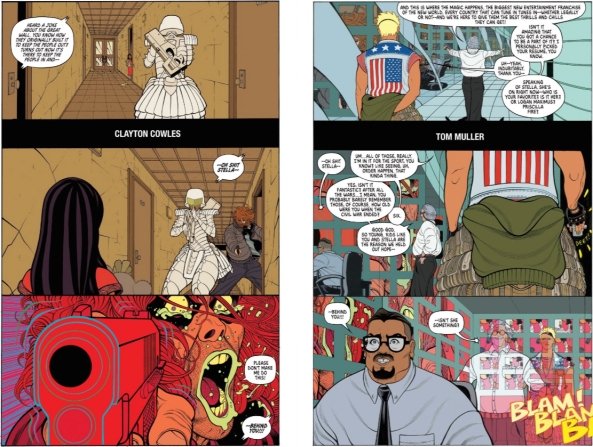 We could assume the earlier spreads were happening more or less simultaneously, but this is the first to make that absolutely explicit, depicting the same moments and dialogue in adjacent panels. There are plenty of elements that might insist on the page-by-page reading order — not the least of which are the margins that separate the scenes and the complete lack of gutter between panels on the same page — but there are just as many that insist on the row-by-row reading. I’m particularly enamored of the way Moore introduces elements on the left page on Jim’s screens in the previous panels on the right page.

But however you read that sequence, you’re going to know things before they “happen,” or at least before they happen for everyone. But that’s okay. The point of this sequence isn’t to be shocked at the surprise emergence of the gunman (or even Kirby’s planting of his device, which Moore cleverly obfuscates within the reveal of the gunman), but to give us a multi-dimensional perspective on those events. Time is one of those dimensions, to be sure, but it’s far from the most important.

And we can scale that attitude up to the star-crossed lovers premise of the series going forward. That these two characters were going to hook up was “spoiled” in the solicit for the issue, but the point isn’t that it happened, but how it happened. Part of that “how” is the sheer enjoyment of seeing things play out (it doesn’t hurt that Moore’s art would make even the most perfunctory, go-nowhere story a must-read), but another part is that same dimensionality that made the character introductions so fascinating. We’re seeing both of these characters learn the truth — their reactions are just as (if not more) important than whatever it is they’re reacting to. We might have known part of the story before we read the issue, but the context was vital, and nothing could ever really spoil that.

3 comments on “Parallels, Dramatic Irony, and Time in The New World 1”