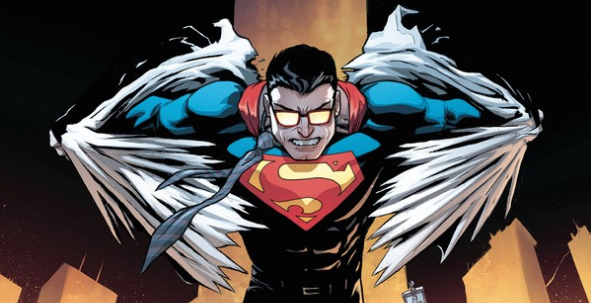 Michael: The distinction between Superman’s two long-running titles, Superman and Action Comics, has never really been made clear. Besides the dollar and cents of it all, the two books exist simultaneously to give different creators the opportunity to tell their own ongoing Superman stories. But what happens when it’s the same writer plotting both books?

Compared to his ongoing Superman title, Brian Michael Bendis has described his Action Comics run as “street level” and “relationship-focused.” Where Superman 1 continued Bendis’ Man of Steel “super-busyness” and mighty displays of superpower, Action Comics 1001 concerns itself more with developing the city of Metropolis.

Thus far, Bendis has done a fantastic job expanding upon how Metropolis reacts to the continued existence of The Man of Steel in their midst. Gotham City is well known for its criminals, but beyond those who actually try to go toe-to-toe with Superman, there’s not a lot of notoriety among Metropolis’ organized crime set.

Action Comics 1001 shows that just as Bendis has to get creative at working with/around Superman’s powers, the criminals do too. In order to avoid detection from the big blue Boy Scout, the heads of Metropolis’ crime families meet in secret in a giant lead pipe. 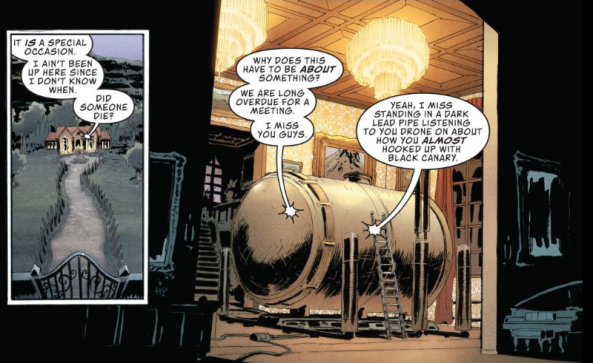 In fact, they don’t even want to use Superman’s name, risking the chance that his super-hearing might pick up on them.

It’s revealed that the “mastermind” behind the slew of Metropolis fires is a crime boss named “Yogurt.” And while his associates and a mysterious lava monster named cloud may disagree, I admire Yogurt’s initiative. 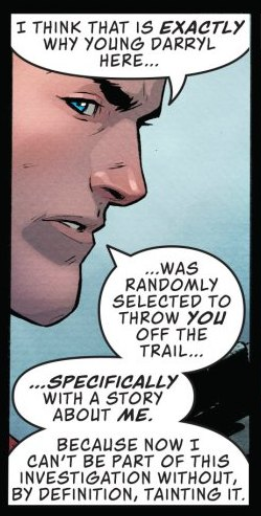 In the face of Superman’s veritable omnipresence, Yogurt hatched a plan to distract Superman while he continues on criminaling. It’s a two-pronged attack too, catching Superman’s interest, then implicating him as a suspect — gumming up the works in a legal quagmire. That might sound a little lame, but it works here. Batman wouldn’t let a little due process get in his way of a mission, but we’re talking about Superman here. Batman can be distrusted or hated “because he can take it” but Superman, by his very nature, must be trusted as a force of honesty and goodness. Truth, justice, and all that.

Daily Planet gossip columnist Trish Q and newcomer Robinson Goode act as the outsider perspective, asking a question that many readers probably have themselves: “Who still robs in Metropolis?”

These two panels might as well be Brian Michael Bendis and Patrick Gleason’s thesis for Action Comics.

In both Superman and The Man of Steel we’ve seen our hero zip around the planet at a frantic pace, cleaning up messes great and small. But super or not, at the end of the day he is just one man. I’m counting on these mobsters to get their act together and throw Superman one big curveball of distractions, stretching himself thin.

While the scale of Bendis and Gleason’s Action Comics might be “smaller,” that doesn’t mean that it skimps on the title’s promise of action.

While we have an iconic visual of Superman in front of the American flag later on in the issue, I think that one of the most Superman-y moments is when he lets criminals pointlessly fire their guns at him as he smiles patiently. He does more than just stand there, however. Gleason throws in a barrage of arms grabbing the bullets, crushing them, and sprinkling their dust to the ground.

Spencer, I am pretty enamored with Bendis’ Superman all around thus far and Action Comics 1001 is no exception — how do you feel about it? Are you at all interested in seeing an exploration of Metropolis organized crime? How do you feel about the Trisha Q of it all? And finally, I did not touch on it myself, but do you have any thoughts on Gleason’s fantastic “bald villains” page?

Spencer: Oh, I loved that page Michael — it’d be almost impossible not to. Part of the reason is that Bendis has read his readers’ minds; as soon as the boy told Superman that a bald man paid him to frame Superman for the fires, I immediately started running through possible culprits in my head, and a page or two later, here’s Clark doing the same thing. I also love the framing, though — the consistent rhythm of the nine-panel page, and the one panel of Clark observing the files, bleeding into the margins and thus breaking the rhythm, works really well.

Gleason does similarly fun stuff with his layouts and framing throughout the issue. Check out this moment, for example.

Melody Moore deciding to break protocol and trust Superman when she sees that symbol on his chest and remembers who exactly she’s dealing with and everything he stands for is a powerful moment, but Gleason’s framing elevates the moment even further. By framing Superman’s iconic logo in the middle of three panels, right below a panel of his face, Gleason essentially recreates Superman’s figure across multiple panels. It’s not only clever, but it also highlights the kind of stature he has, the shadow he casts and the figure he cuts.

Anyway Michael, to answer another of your questions, I can’t particularly say that I’ve ever really been invested in Metropolis’ organized crime scene before, but Bendis and Gleason may just change that. Organized and street-level crime have always seemed too small-scale to concern Superman (or to really pose a threat), but Bendis has found a way to change all of that by tying their street-level approach into Superman’s.

The phrase “street-level” always makes me think of noir or detectives, and in its own way, Action Comics 1001 has some mystery elements to it — except, instead of a detective, it stars a reporter. Indeed, Clark Kent’s reporter prowess is the real star of this issue. Other than a one-panel shot of him stopping a helicopter, Superman never uses his powers offensively in Action 1001. Instead, he plays defense and uses his reputation and super hearing to interrogate witnesses, and his Daily Planet authorization to search its database for information. Even the opening recap highlights this aspect of Superman, focusing on an image of Clark Kent’s desk and presenting his origin story as if it’s been printed on newsprint.

Thus, Clark’s ability to obtain and verify information is presented as his most useful skill, and this is what ties Superman into every other aspect of Action 1001, but especially the villains. If Superman seeks to use information to reveal the truth, the cabal of criminals led by Mr. Strong and the Red Cloud use information to disguise and hide it. 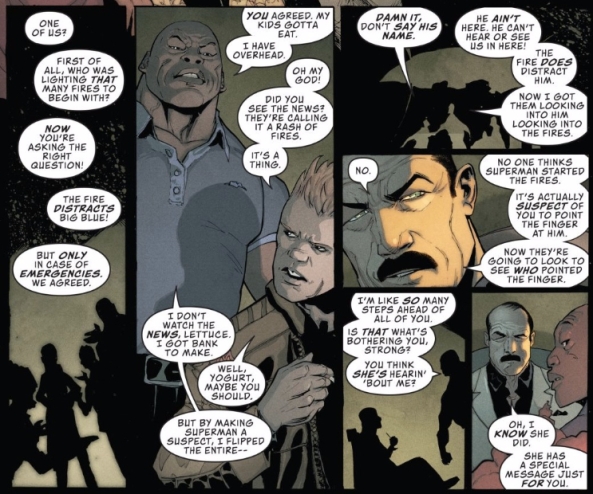 We can infer that this cabal is just as talented at obtaining information as Clark is; they know all of Superman’s abilities and how to counteract them, how to hide themselves from them. They’re also talented at sowing chaos and misinformation, using the fires as a distraction from their crimes and then, when that’s in danger of failing, framing Superman as another distraction. Mr. Strong paints these specific efforts as a failure, but they’re certainly indicative of the group’s typical M.O. They’ve weaponized information, even if they’ve done so in a totally different way than Superman.

This remains a theme throughout the rest of Action 1001 as well. Though the thread from DC Nation 0 isn’t explicitly referenced, it’s implied that Robinson Goode is still acting as a spy at the Daily Planet, gathering information for an outside party. Trish Q, meanwhile, has her own credo for how to use information, even one’s own personal secrets, and she’s not shy in sharing it.

In a way these two are counterparts in a similar way to Superman and Mr. Strong’s group — Goode is out to steal secrets while Trish thinks people should reveal their own secrets first, not only for personal gain, but as a way to beat others to the punch, weaponizing her own secrets before anybody else can.

Ultimately, every character and plot in this issue represents a different way to gather, interpret, and weaponize information, and it not only makes for a fascinating and thematically tight issue of Action Comics, but for a series that feels very different from Superman. All of Bendis’ takes on the character throughout both his titles are working like gangbusters, and I couldn’t be more excited about the future of this franchise in his hands.