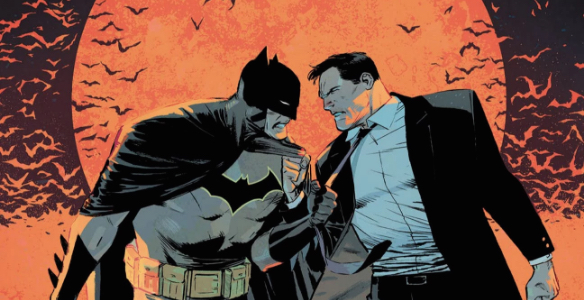 We’ve written a lot over the years about how the disparate tones of various incarnations of Batman have created a kind of range that the character operates in. Maybe he’s light and campy, maybe he’s dark and serious. Maybe he’s a high-tech wizard, maybe he’s a low-tech sleuth. Maybe he’s a bitter loner, maybe he’s cultivating an ever-growing family of friends and allies. That range applies just as much to the look of Batman, as different character designs emphasize different aspects of his character. Is his costume scary, or silly? Is humanity obscured by his costume, or made more obvious by it? In practice, the platonic image of Batman we keep in our minds might be just as diffuse as his mood — a kind of pastiche of the designs from, say, our favorite comics runs, Batman: The Animated Series, and maybe even a few movies. High in the mix for most modern comics fans, though, must be David Mazzucchelli’s distinctively line-smart Batman: Year One, which distilled Batman down to as few brush strokes and dabs of color as possible, creating a kind of shorthand iconography for the character that perfectly suited the early-days nature of that story. It’s a style that Lee Weeks and colorist Elizabeth Breitweiser evoke in Batman 52, though rather than celebrating that iconography, they’re interrogating it.

The 12 Angry Men framing of this story is approached in a much more neutral modern style — I don’t mean to suggest that Weeks and Breitweiser don’t have their own styles, just that they aren’t affecting or adopting the styles of others. But the flashbacks, which depict Batman “solving” the crime and apprehending Mr. Freeze, are drawn and colored in a distinctively Mazzucchellian way. Take a look at the economy of both detail and color palette here, for example: 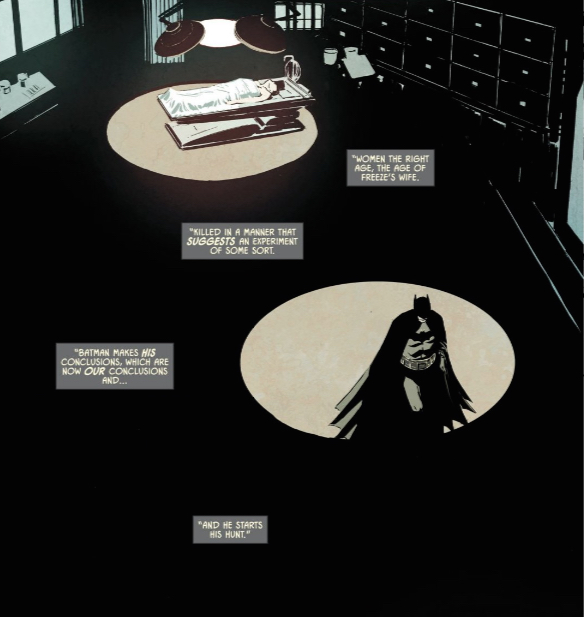 Importantly, these moments are accompanied by Bruce summarizing the case as both the prosecution and the rest of the jury understand it. It’s not entirely clear why Bruce is starting to question his initial conclusions — is it that he fears a world where any man, including himself, is trusted implicitly? Or is it that “beyond a reasonable doubt” is a more rigorous standard than he applies on the street? Or maybe it’s just that he knows more than they do, including something exculpatory that he can’t share. Whatever the case is, it seems everyone is invested in the mythology of Batman as an infallible do-gooder, making the simpler, stripped-down style so appropriate for their mind’s eye.

Although, that “mind’s eye” is a bit more complicated than I’m letting on. The jurors certainly lionize Batman, but the flashbacks also feature dialogue nobody but Bruce could possibly know, suggesting that these are indeed his own memories of those events (albeit as narrated by the evidence in the case). That is, I suspect we’re seeing these events filtered through Bruce’s own rose-tinted glasses, which recall his efforts as inherently noble. And those glasses are a real thing for everyone, especially for folks in law enforcement, and especially for people whose actions have been called into question. Bruce happens to be introspective and compassionate enough to indict himself (figuratively), but not everyone does, and not even society at large can when given the opportunity, giving police officers virtual immunity for even their worst actions. Like Batman, police are often seen as heroes, so they’re given the benefit of the doubt in the same way, perhaps at the expense of justice.

To be clear, this issue isn’t calling out police corruption, but it does find Bruce Wayne insisting on a standard beyond simply trusting law enforcement. He wants to look beyond the myth of Batman — a myth he has had to believe himself a times — to find the actual truth. The irony, of course, is that we give credence to Bruce’s doubts precisely because we trust him. He’s still the infallible detective, he’s just not done with the case yet. It leaves the issue in an interesting place, challenging us to question our own assumptions about Batman, even as it seemingly reinforces them.