Michael: In The Empire Strikes Back, Darth Vader has a score to settle with Luke Skywalker — solely for the reason that he is the rebel who blew up the Death Star. But Luke was only able to take that final shot because Han Solo intervened and blasted Vader’s Tie-Fighter out of the way. It is the dogfight of A New Hope. In Star Wars 52 we get the rematch we never knew we wanted: Han vs. Vader.

The Rebels are on the run from the Empire, as they are wont to do, trapped in their Mon Calamari cruisers with sabotaged comms while the Empire lays siege in the space above. Flying the Millennium Falcon with C-3PO and Chewbacca, Han Solo is the fleet’s only hope. Han needs to get the message to Luke and the fleet that they can escape the cruiser and join in the fight, all while being pursued by Darth Vader’s Tie-Fighter.

The void of outer space is immense and endless, hence the “voidy-ness” of it all. In order to provide some context for scale, there needs to be a point of comparison in the foreground or background. In the opening scene of A New Hope the combining elements of space, a planet surface and Princess Leia’s ship provide context for the gigantic size of the pursuing Star Destroyer. In Star Wars 52, artist Salvador Larroca uses a similar technique to emphasize the vastness of space.

Instead of the pitch black background outer space, Larroca colors a fiery-red/orange backdrop that Han and Vader race across. With the exception of five pages at the end of the issue, the majority of pages in Star Wars 52 exist without traditional comic book gutters. Instead, Larroca uses that blood-orange space backdrop as a canvas for any interior panels within. Again the vastness of space is emphasized.

I’ve always found this form of page layout to be very effective, heightening the emotion of a particular moment. Take this page for instance:

The camera closes in on Han, the emotion of the page anchored on his face as he whispers a “prayer” trying to fly through the debris of a destroyed cruiser. This is more than just an “outer space as canvas” page that I mentioned. At first glance, this page looks like it is made up of three panels: one giant image separated by two horizontal close-ups; but it’s actually five panels. Larroca draws the enveloping cloud of debris in such a way that it looks like one single “object” from the top of the page to the bottom. But in reality he is showing us five different instances in the Falcon’s journey through the cloud, with the “finish line” of the cloud at the bottom of the page.

Luke and the rest of Rogue Squadron believe that they are trapped inside of the Rebel cruiser, along with their X-Wings. Larroca visually explores this bit of cabin fever by placing all of those panels/pages back within the traditional gutters.

It’s not until Rogue Squadron is fully out of the cruiser that the format reverts to the space canvas.

In a layout that is practically identical to Han’s race through the debris, Larroca symbolizes Luke’s disagreement/rallying cry with Wedge Antilles:

It’s a hokey scene but Luke is arguing that it’s important not to lose sight of that “hope” and sentiment that makes the Rebellion what it is. Luke is cast in shadow in a moment of self-doubt then doubles down, emphasizing the importance of teamwork and Rebel love. Luke goes from being alone in the last two panels of that page to the Rogue Squadron forming up, ready to take on Star Destroyers on the final page of the book.

Patrick were you at all interested in a dogfight between arguably the two best pilots in Star Wars? What about the C-3PO of it all? Is it really a Star Wars story if 3PO doesn’t lose a limb? Should Han feel any guilt in using the destruction of a fellow Rebel vessel as a means of escape?

Patrick: Taylor and I were talking about this at the end of the previous arc — the rebels just love sacrificing their own ships to land killing blows against the Empire. A Hammerhead Corvette crashes headlong into Star Destroyer in Rogue One, and Admiral Holdo jumps into hyperspace and chops a New World dreadnaught in half in The Last Jedi. It’s a mark of ultimate desperation, the understanding that you’re fighting an enemy that requires every imaginable resource and sacrifice to overcome. If that means you gotta lose your foe in the remains for your friends? So be it.

I actually really really liked C-3PO’s role in all of this. I’ve expressed before that my dislike for that pompous sack of condescension is one of those qualities I actually end up looking for in my Star Wars stories. Quite simply: that’s how I know it’s Star Wars. But I think a lot of this arc in in Gillen and Larroca’s series is about linking the characters to the objects that they are flying around the void of space. Michael’s done a great job of exploring how Larroca establishes that setting as both emotional and dynamic, but I’m excited for how many different tricks this team uses to imbue the steel discs and tubes zipping around that environment with character.

Threepio ends up being the ultimate marriage of character and spaceship by being launched directly at a Rebel cruiser.

Goddamn, I love seeing an escape pod seemingly shouting an all-caps “SIR!” Maybe it’s the size of the vessel he’s in, maybe it’s their shared immobility, but in that moment, Threepio and the escape pod are one and the same.

Actually, there are some pretty beautiful moments earlier in the issue that insist on the relationship between the pilot(s) and his craft. I’m going to credit letterer Clayton Cowles with this neat little trick, but check out the way he draws balloon tails back to specific locations within the ships when forced to show dialogue in those exterior shots of the Falcon.

Chewbacca’s balloon traces right back to the turret while Han’s zip off-panel to the un-shown cockpit. This all helps us emotionally understand that there is distance between Han and Chewie, even if it seems like their shared character of “The Millennium Falcon” is is one place.

All of this paves the way for one of the strongest characterizations of ship or group of ships: the birth of Rogue Squadron. Luke’s ready to lead his band of X-Wing fighters against the Imperial threat armed only with the knowledge and inspiration of his fellow rebels. Han, Chewie, Threepio, Jyn Erso — these people exercised their strengths and sacrificed their lives and bodies so Luke could have a fighting chance. Luke puts all of this together in the final moments of the issue, renaming his team to better honor the people that propped him up along the way. 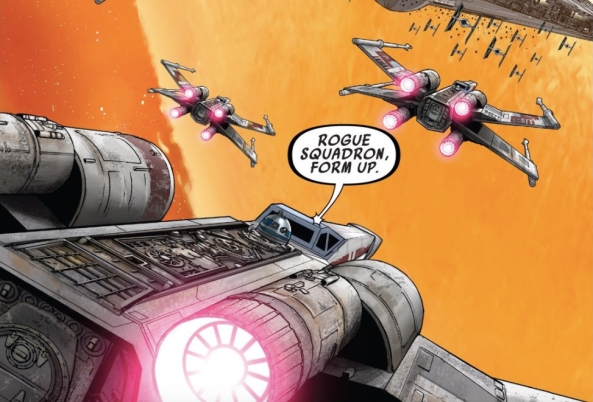