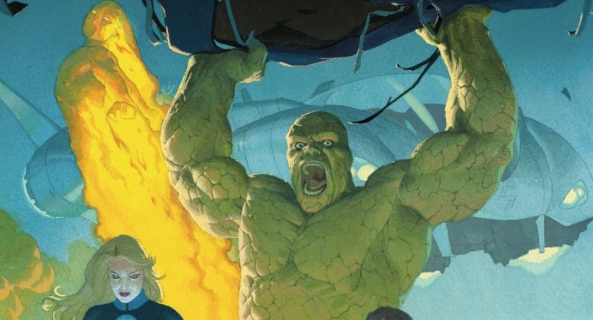 But this epilogue is more than just a cute way to sign off with joke. By ending the issue with an explicit acknowledgement that “they’re not even back yet”, Slott and Young are doubling down on the idea that the absence of the Four itself is a phenomenon worth exploring.

Of course, Slott and artist/storyteller Sara Pichelli had been telling that story for 20 pages before this. I love how frequently this issue teases the idea of the reunion, fully knowing that every time Ben and Johnny have a glimmer of hope, they have to double down on their separate coping mechanisms. The first couple pages literally tell Ben and Johnny’s stories by splitting the page in half. Johnny’s enjoying his celebrity, low-key leveraging his powers to have fun and be loved by a stadium full of Mets fans. Ben, on the other hand, has turned inwards, rescuing kittens and going to a farmers’ market with Alicia.

We’re seeing some basic personality traits playing out against the specific backdrop of a world without the Fantastic Four. Johnny’s all bluster, Ben’s quiet and private. Check out this juxtaposition of the role these two play on this two-page spread. 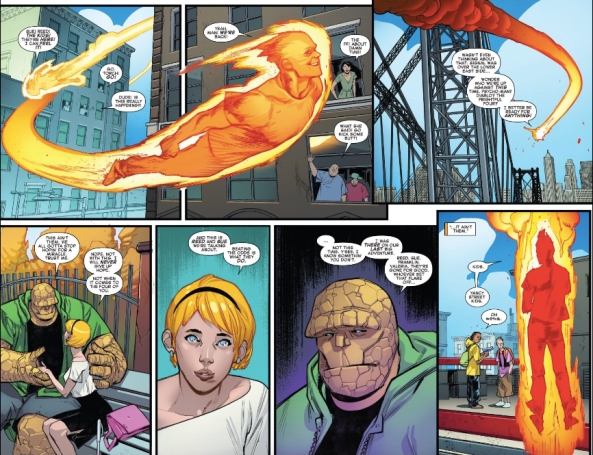 Ben is a rock — stationary. Meanwhile, Pichelli draws Johnny with both motion blur and a fully circular flight path between two panels. They’re dealing with the same stimulus — the words “Fantastic Four” in the skies above New York City — but their reactions are totally different. Ben needs so desperately to move on, while Johnny needs to not give up hope. This is the peaceful version of that difference.

When the next step in Ben’s plan tramples on Johnny’s, their collective frustration boils over, pitting the Human Torch and the Thing in a finger-pointing, fist-slamming argument. We’ve been seeing some of this dynamic playing out in Marvel Two-In-One, but I think the most haunting part of this exchange is Johnny’s eventual acquiescence. “It’s true, isn’t it? They’re really gone.” Ben embraces Alicia and Johnny together — a reconciliation of past and future, loss and gain. They are t h i s c l o s e to finding peace with their new status quo. Pichelli is more than happy to tease us with genuine pathos. 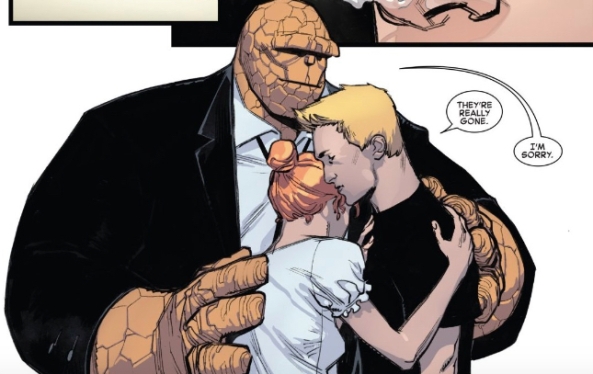 But then a goddamn Four-shaped whole opens in space. And just when we were starting to make progress…

One comment on “Fantastic Four 1 Teases the Reader with Pathos”