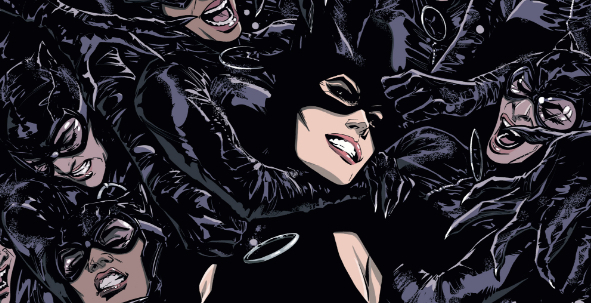 Catwoman 2 continues the series’ fascination with the qualities that tie Selina Kyle and her nemesis, Raina Creel, together, even when the way they express those shared qualities couldn’t be more different. While last month’s premiere focused on the two women’s contrasting takes on fashion and identity, issue two zeroes in on the idea of pain, specifically on treating pain like a tool, a solution, even a prescription.The issue opens with Selina facing down a veritable army of dopplëgangers. She doesn’t fear a beat down, though; instead she embraces the possibility, hoping that any pain and exertion she feels, any hit she takes might finally help her get some sleep. 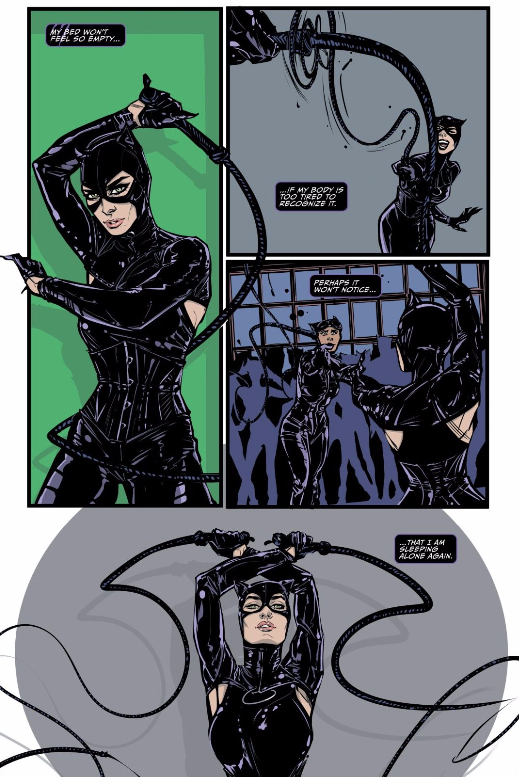 Selina essentially treats the fight like a sleeping pill, a prescription that will cure not only her sleeplessness, but the loneliness causing it in the first place. She’s self-medicating, an action that almost always stems from self-destruction; in this case, both her “illness” and her cure are a response to the guilt and self-hatred she feels over leaving and losing Batman. Even the diamond engagement ring Selina continues to fawn over is a form of self-flagellation, the “snap” of its case closing coming across as surprisingly violent within the context of the issue.

Creel’s entire character revolves around medical procedures and devices, but unlike Selina, pain is a tool she turns outwards rather than inwards, prescribes to others rather than herself. 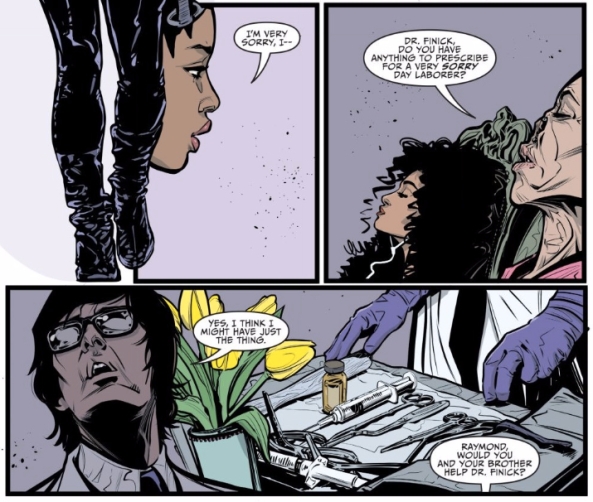 In the very next panel Dr. Finick smashes the impersonator’s hand with a hammer, but writer/artist Joëlle Jones uses the language and framing in the sequence above to present that as a “medical” solution, as just another tool in Creel’s endless twisted pharmacy. In that sense, it’s not just that Creel directs pain outwards rather than inwards; it’s that, while Selina is using pain to try to find peace, Creel finds joy in inflicting pain, creating chaos and conflict and strife. They’re quickly becoming two sides of the same coin.

We still don’t know why Creel is calling out Selina, but even though they’ve yet to meet, Jones has established a real connection between the two women, highlighting the unique traits they share in common and the fundamental differences in how they express those traits. It should make for sparks, for an absolutely fascinating relationship, once they finally come face-to-face.